In my previous post, I described how tides could influence the oyster patterns that we are observing throughout the Atlantic and Gulf coast.  But throughout the Gulf coast, can tides explain why most of the oysters sold in restaurants come from subtidal reefs?  Are subtidal oysters healthier, happier and thus more abundant?

Well, before I attempt to address this issue, let’s first talk about the difference between subtidal and intertidal oyster reefs.  The term intertidal refers to a habitat that spends part of the day submerged by water and the other part of the day out of the water.  In contrast, the term subtidal refers to habitats that are constantly submerged by water.  Interestingly, along the NW coast of Florida, oyster reefs are subtidal from Pensacola to Apalachicola Bay.  And east of Apalachicola, oyster reefs become intertidal. 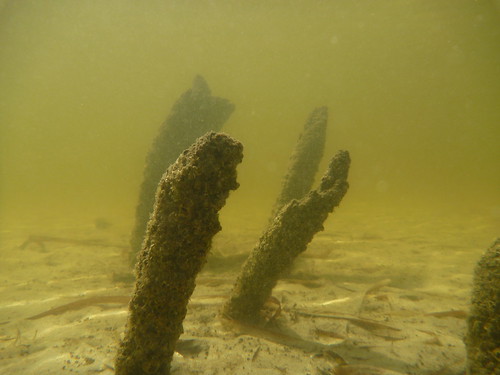 Now back to the second question above: are subtidal oysters happier and healthier than intertidal oysters?  Research by Dr. Charles Peterson at the University of North Carolina at Chapel Hill suggests the answer is no because both reef types have different costs and benefits that keep growth and health roughly the same.  For example, subtidal reefs may get the benefits of being inundated all the time by food-rich water, but this constant submergence also has costs that include: getting covered by fouling invertebrates (i.e., animals commonly found on the bottom of boats that look like silly puddy) that compete with oyster for food and being exposed to more marine parasites and disease.  In contrast, the harsh sun baking that intertidal oysters receive during every low tide can be painful and they may also get exposed to less food, but the sun baking also cooks off the silly-puddy competitors and it also keeps the parasites away.  In the end, these different costs keep growth rates about the same between subtidal and intertidal oyster reefs.  This is why intertidal oysters from Cedar Key, Florida can be just as big and delicious as subtidal oysters from Apalachicola.

Now I’m ready to tackle the first question  from above: why do so many more oysters come from subtidal reefs in Apalachicola than from the intertidal reefs to the east and why aren’t intertidal oysters always equally as large and tasty as subtidal oysters?  After talking with an extremely knowledgeable biologist who has been studying and working with Gulf coast oysters for nearly thirty years (John Gunter), I can fairly confidently say that the answer deals with the size of the fresh water input entering an estuary and diversity.  This is because good oyster production requires a tricky balance between fresh and salty water that keeps marine predators/disease at bay and fuels phytoplankton for growth and reproduction.  So, a larger source of fresh water input creates a larger portion of an estuary suitable for oysters to achieve this delicate balance.  But the amount and timing of fresh water input, along with the weather, varies from year to year.  As a result, one set of fresh-water input and weather conditions may be good for one portion of the estuary and not so good for the other portion of the estuary.  But the next year, this situation could become reversed, maintaining a constant level of production through varying levels of fresh water input and climate.  In other words, Apalachicola has a relatively large and diverse oyster portfolio. 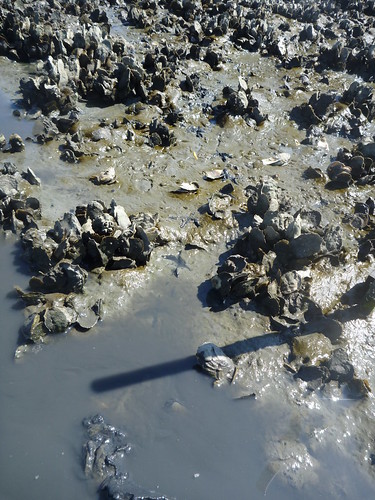 Without a steady influx of freshwater, intertidal reefs have no assurance of being consistently healthy and abundant.

Ok, now that I waved my arms about the difference between subtidal and intertidal oyster reefs and why restaurants mostly serve subtidal oysters, I need to go get ready for our next big outing onto the oyster reefs, which should be extremely busy, but fun.

We want to hear from you! Add your question or comment below.

[…] Why do we eat Apalachicola oysters instead of those from Alligator Harbor?   http://www.oysterradio.com e-mail manager@oysterradio.com with comments Oyster Radio 35 Island Drive Eastpoint, Fl 32328 […]

Thanks for the info