To clarify, we are looking at the biological process through which a blue crab molts its shell, not recipes (feel free though, to share your favorites in the comments area).  I have to admit that before I started this project, I had thought that softshell crabs were a specific species, or group of species.  Of course, such a species wouldn’t survive very well in the wild. 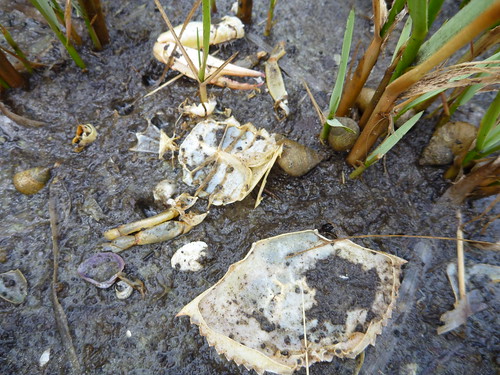 The video outlines the mating process of a blue crab.  We had this footage of a female blue crab molting, obtained by WFSU-TV producer Mike Plummer.  In it, Leo Lovel explains the molting and how it fits in with the crab’s reproductive cycle.  Leo is a local restauranteur and author of Spring Creek Chronicles, a collection of stories of his days as a commercial fisherman.  Mike is producing a story on Leo’s books and experiences, and he got the molting footage as a little bonus while visiting Leo’s restaurant.

The molting footage (sped up- the process takes a few minutes) is augmented by some field footage of blue crabs in St. Joe Bay.  The day before I wanted us to finish editing this piece, I was in the Bay shooting Randall Hughes’ next piece when I saw these three crabs fighting to be with a fourth, larger crab.  This is the season in which they mate, and with Summer over there are less people and more animals out in the bay.  As photographer John Spohrer mentions in our interview with him, animals mating or feeding will let you get closer to them.

This is the first video edited by “In the Grass, On the Reef” intern Marlee Haynes.

Add your comments below:

Photo of the Week

Zebra longwing butterfly sips nectar from a tomato flower. I forget now, after years focused on native plants and creating a habitat in my yard, why I originally wanted pollinators so badly to visit the yard.