Where did my winter of catching up on work go? And why is spring quickly hurtling into summer? YIKES!

…Okay, I feel better. All of us here feel a little behind on things, because this past winter and spring have been full of other projects (in addition to the oyster one) such as investigating how the oil spill affected marshes throughout the west coast of Florida and examining what all of those snails are up to out on Bay Mouth Bar. But now that summer is almost upon us, it’s time to move all hands on deck back towards the ambitious summer oyster goals. 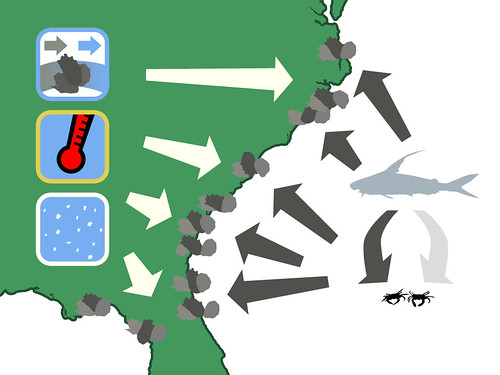 To lay the ground work for this summer’s oyster research, I spent a few days in St. Augustine, Florida, which is where we will conduct our colossal field experiment. As a recap of the oyster objectives, we spent year 1 monitoring the oyster food web at 12 estuaries between Florida to North Carolina. Well, we found some cool patterns regarding the food web and water-filtration/ nutrient cycling services on oyster reefs (see the 2010 wrap-up). So, now we want to know what’s causing those patterns. Are differences in oyster reefs between NC to FL due purely to differences in water temperature, salinity, or food for oysters (phytoplankton)? Or, do we have a higher diversity of predators down south that are exerting more “top-down” pressure on the southern reefs? Or, is it a combination of the environment and predators? 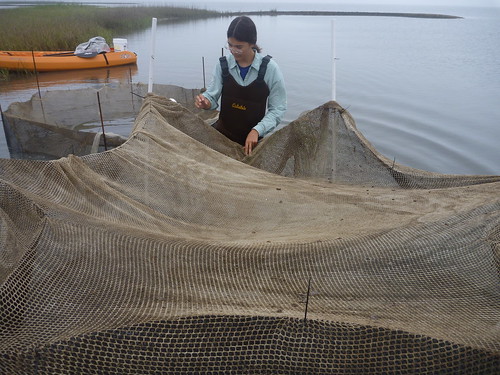 Tanya tends to a prototype enclosure for their experimental reefs. Enclosing the habitat will allow David and his colleagues to control the number of predators on each reef.

To get at the answers, we are going to create 21 brand new reefs at each of three sites: one in NC, one in GA, and one in Florida (Saint Augustine). As far as field experiments go, these reefs are going to be huge (~3 x 3 m). Now, relative to natural reefs, that’s a laughable size. But going any bigger would make this summer truly nightmarish and probably unproductive. We will begin building these reefs in May. On June 1st, we will add additional trophic levels to some of these reefs (but not all) in order to create the following treatments: 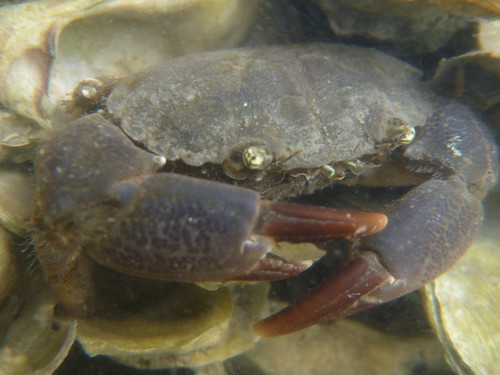 A juvenile stone crab on an Alligator Harbor oyster reef.

All teams will do the exact same experiment at the exact same time with the goal of understanding how the addition of different trophic levels onto oyster reefs (i.e., treatments 1-3) influence not only oyster reefs but the services that oyster reefs provide (water filtration and nutrient cycling). And by doing this in NC, GA, and FL, we’ll learn if and why the same food web operates differently at different locales.

Now, to the chagrin of my team, I want to double the workload in Florida by including some additional treatments:

While I’m at it, maybe we should do

This would let us know how the dominant predators of Florida change things.

So, while in St. Augustine, Hanna and I raced around on kayaks to find a suitable place for this experiment. Things we were paying attention to about each site include:

-is it relatively easy for us to access but a bear for the general public to access?
-is it out of sight (cages look like fun things to poke and prod)?
-is the sediment quick sand?
-are the sediment properties similar to the sediments at the potential sites in NC and GA?
-is there a nearby channel to bring a small boat in?

The NC and GA teams are collecting the same kinds of information so that we can pick relatively similar sites for our experiment. Of course, this sounds straightforward and easy to conduct, but it has definitely been a less than smooth process. But, we are getting there. And at least the Florida crew is ready to begin reef/cage construction in May. So, stay tuned in because there should be a lot of laughs and tears over the next four weeks. 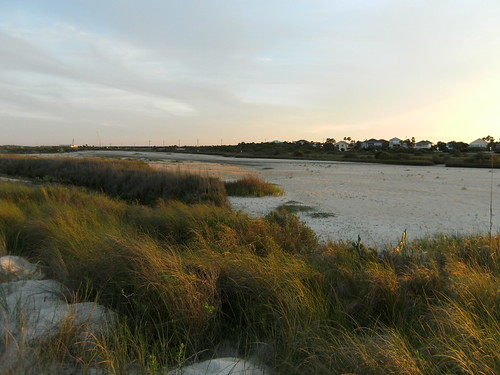 In addition to selecting locations for our experiment, we had two other objectives for our most recent trip to St. Augustine. First, I really don’t know anything about Florida and know even less about the ecology and politics of St. Augustine. Realizing my ignorance, I wanted to befriend the local community at St. Augustine, let them know about our research, and learn as much as possible from them in order to save me from making unnecessary mistakes this summer.

Luckily, I was asked by Patrick Hamilton to give a lecture about oysters to his Community Association. I decided to discuss the global status of oyster reefs, how we got to this degraded condition of oyster reefs, and why it matters. In a following post, I can summarize this talk. Or, maybe we can post a video of the seminar on this blog? I’ll leave that up to the higher powers of WFSU!*

But to do a little self-promoting, I closed the St. Augustine seminar with a brief introduction to our research objectives within St. Augustine. This interaction with the local community turned out fantastically, not because of the content and delivery of my talk, but because I met tons of great and knowledgeable people. In doing so, I feel like I learned enough stuff to save me about a year’s worth of mistakes that surely would have occurred had I tried to carry out my summer research objectives without input from the local community. This community really cares about their natural ecosystem and are fun to hang out with. They invited me to an oyster roast (you have to study something that you can eat!), where we had a great time sampling the local product and debating the merits of my research. It was great to be on the warm seat and to be around folks who are really interested in what we are doing.

Another reason why I was in St. Augustine last week was because (like all large projects) the NSF project has produced a spin-off dealing with the ecology specific to St. Augustine.  Hanna, who has agreed to enter my lab as a graduate student, will spearhead that project and she’ll be talking about that here soon.  So stay tuned!

*David will be giving this talk again for Randall’s class.  We might be persuaded to tape it-  Rob 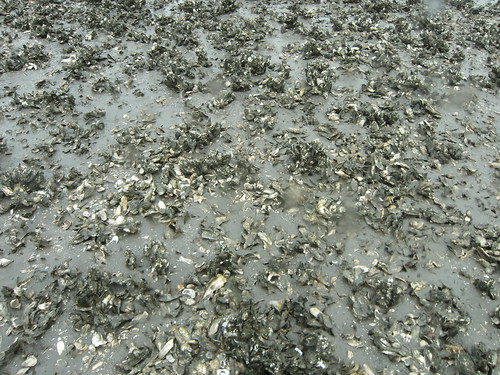 Next On the Reef: what is destroying David’s Saint Augustine Reefs?  Stay tuned…

Sounds exciting! Although I agree with your lab that it also sounds like a lot of work! Some of your crab predators are also oyster predators, so are you going to have some treatments with oysters and the higher order predator, so you can get a baseline for their oyster consumption? This way, you can use an additive multiple predator effect design to predict what your oyster consumption should be (based on the mud crabs and the higher predators alone) and see what it actually is when they are together, and this would help solidify the argument of risk reduction of the oyster prey in the presence of your higher predator.
Also, something I am going to try out up here this summer, and maybe you have thought of this, is to use lobster wire to build cage enclosures that allow free movement of the mud crab mesopredators, but that include or exclude the higher order predator (which I also plan to use toadfish and blue crabs). This way, and maybe I am wrong, you could have your reefs with higher order predators, and the mud crabs are free to colonize or not colonize the reefs, and you can compare reefs with predators present vs. predators absent on naturally “recruiting” mud crab abundances, and resultant survival of the oysters. Then again, this may or may not be useful, but just something that has been bouncing around in my head for my eelgrass-scallop stuff up here.

[…] year later and David & co. are preparing an intensive experiment (described in detail by David earlier) to kick off year two.  It’s a far cry from last May, when we saw David, by himself, figure […]

[…] an explanation of the experiment and all of its parts, click here. That's one way to retrieve a minnow trap! Dr. Jeb Byers untangles this trap from the propellor […]

[…] is a series of images from our caging experiment last summer, which you can read about here. Our large cages contained […]

[…] research. This past winter, I spent many weeks processing various frozen components of great cage experiment of last summer, including the several hundred spat tiles placed inside the different cages at all […]