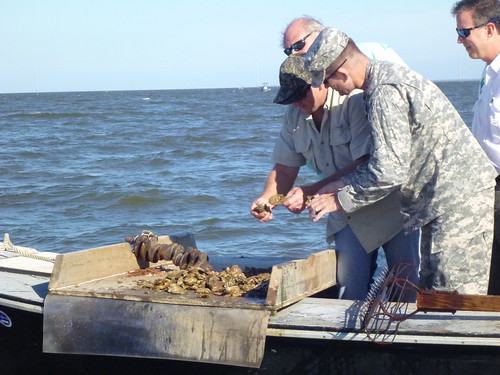 Shannon Hartsfield and Colonel Donald Jackson of the Army Corps of Engineers South Atlantic Division look over their catch during an oystering demonstration at Cat Point Bar. This demonstration was meant to show the problems caused by low fresh water input into the bay. Below, David talks about starting to work towards a possible solution. Spread offense or Power-I formation? Man-to-Man or Zone defense? Austerity or Stimulus spending? And most importantly, Batman or Batgirl?

Whether leading a team of athletes or a population of countrymen, deciders frequently confront such either-or decisions or binary outcomes (i.e., yes or no).

Because time is one of our most limiting resources, natural scientists confront such a dilemma right out of the gate: should I pursue Applied or Basic scientific research?

By applied, I mean research that focuses on immediate solutions to societal problems: How can we deal with a new infectious disease (e.g., avian flu)? Where did the BP oil go?

By basic, I mean research that focuses on improving our knowledge about the nuances of the natural world: How many galaxies are there in the observable universe and how were they formed (I just saw a must-see iMax movie, Hubble 3D, at the JFK Space Center Visitor Complex)? Why is biodiversity so much greater in the tropics?

Flashing back to my childhood hero, I realize that Michael Jordan will likely remain the best basketball player to ever play not solely because of his offense (which was certainly top tier), but also because he worked relentlessly to become a top-tier defender as well. Obviously, few people can master both sides of a spectrum, and sometimes a focus on both or on splitting the difference can come with great cost. For example, my favorite college football team (UNC) is implementing a hybrid defense (i.e., a 4-2-5 instead of a 4-3 or a 3-4) this year; we LOST 68-50 this last Saturday…in FOOTBALL!

Because my plans for playing in the NBA and NFL obviously aren’t working out, let’s get back to science and the merits of focusing on both ends of the science spectrum.

Recently, I talked about this topic with a leading research and clinical Psychologist at Florida State University, Dr. Thomas Joiner. Ignorantly, I thought FSU was only great in Football…turns out that they also have the best Psychology department in the nation. In a recent book Lonely at the Top, Dr. Joiner weaved together many interesting and Basic research studies to show how gender and evolutionary forces cause nuanced interactions all the way from neurons and one’s health to one’s social behavior. It was fascinating to learn how these interactions can promote the loneliness that facilitates suicides.

But while all of these powerful connections lined up well for the main argument of his book, I am equally interested by a conversation we recently shared together about there being many applied problems that can’t wait around for further testing of nuanced ideas. For instance, Dr. Joiner recently began working with the US military to study and reduce the causes of suicide within the military. As Dr. Joiner indicated, the military probably couldn’t give a darn about Basic research findings. They just want some realistic solutions and they want them yesterday. If you stuck it out this far, you are probably wondering, “how does this relate to oysters, predators, etc.?” Well, the motivation of my Basic research is to increase our knowledge about how predators keep the lights on for many of the natural systems that we depend on like oyster reefs, salt marshes and seagrass beds. But in pursuing this research over the past three years, I have confronted a very important applied problem that needs immediate solutions: the oyster fishery of Apalachicola, Florida presently contains too few oysters to support the local economy (Download a PDF of the Department of Agriculture and Consumer Services report here).

So, if you follow this blog, you’ll get to see whether my attempt to be like Mike (if you’ve seen my vertical leap, it’s obvious we’re talking research and not b-ball), to emulate the approach of Dr. Joiner, and to split the Applied–Basic difference is a success or a bust. I’ll be working with a lot of good researchers (Florida Sea Grant, UF Oyster Recovery Task Force), state organizations – Florida Department of Agriculture & Consumer Services (FDACS) and Florida Fish & Wildlife Conservation Commission (FWC)- and the local community to examine the following: David accompanies FDACS on a sampling trip in Apalachicola Bay as part of a new collaboration.

(1) How in the heck do you work in such a large and logistically challenging system?

(2) What is the extent of the problem…how far gone is the resource?

(3) After getting some research under our belts, what our some realistic options to this problem?

(4) Because we all want answers to these questions yesterday, can we explore the existing data, which was impressively collected by FDACS for the past 30 years, to get a head start?

Finally, I suspect that this Applied perspective may help inform the merits of my Basic interests. There are a ton of things that could be contributing to the failure of the oyster fishery such as climate change, drought, fresh-water extraction, over-harvesting, disease, nutrient inputs, and water quality. Whether or not any of our predator ideas help explain the lost of this fishery represents a very big test. In other words, relative to other explanations, is all of this predator stuff really important?

Ok, as the locals along the Forgotten Coast say “let’s get’er done”.

Take the RiverTrek 2012 photo tour down the Apalachicola River. You can zoom in and scroll across the map for greater detail. Later we’ll post a map with more of the basin and bay as well, from our other EcoAdventures in the area (River Styx, Graham Creek, etc.). Also, many of the locations are approximate. We did not geotag the location of every houseboat on the river, but the photos do show up in the same general vicinity (with the exception of more recognized landmarks such as Sand Mountain, Alum Bluff, etc.).

For more information on the Apalachicola RiverKeeper, visit their web site.  (They’re also on Facebook).

[…] basin, and bay remain.  As my In the Grass, On the Reef collaborator Dr. David Kimbro gears up to further investigate the oyster reefs in the bay, our focus when it comes to Apalachicola will shift there.  But while […]