I think most of my best paddling trip memories are from moments that happened outside of the canoe or kayak. Those lunch or snack breaks on sandbars, or cooling off with a quick swim. Maybe we headed into the woods in search of a spring. We enjoy our north Florida rivers because they’re wild and mostly uncluttered of human structures. We call them scenic, and it’s fun to enter that scenery and explore. So when we were picking a section of the Chipola River to paddle, Doug Alderson and I turned our minds to where we’d break from kayaking.

Unlike the Apalachicola or Suwannee, there aren’t numerous sand bars to stop and picnic. Instead, we had a cave and a side trip up a spring run to break up our trip. The cave excursion alone makes it unlike most any paddling trip on a Florida river; a truly memorable river adventure.

The Chipola River Paddling Trail covers 51 of the Chipola’s 92 or so miles. The Upper Chipola goes underground at Florida Caverns State Park; this is a separate paddling trail that we covered in 2016. The trail we’re covering today begins where the river emerges, south of the park. And then, a few miles after the trail ends, you’ll find the Dead Lakes. We paddled that section of the river in 2014, and then visited beekeepers as they harvested tupelo honey from their hives. A dozen or so miles after the Chipola once again narrows to a river channel, it flows into the Apalachicola River, providing about 15% of the larger river’s freshwater flow.

So, you can see that I’ve paddled just north and just south of the Chipola River Paddling Trail. But there are some real treasures in that main stretch of the river, and it’s about time I took a camera to capture them.

Planning Your Trip with the Chipola River Paddling Trail Guide

Doug is the Assistant Chief of the Florida Office of Greenways and Trails, which creates maps for the state’s paddling trails. When planning your Chipola River paddling trip, this guide is a good place to start. It lists eleven access points, and lists at what mile of the trail each is located. We put in at the beginning, at Yancey Bridge, which is mile 0. We took out at access point #4, the Magnolia Road Bridge, mile 10. Ten miles seemed like an ideal length for our trip.

You’ll notice that there are few camping options available; you’re not going to be able to plan a multi-day trip in the same way you would on the Apalachicola or Suwannee. And the Palm Island primitive camp site listed on mile 16.2 is no longer usable after Hurricane Michael. However, the access points are evenly spaced enough for you to paddle the whole trail as a series of day trips.

In addition to access points, you’ll see a multitude of springs marked on the guide. Depending on the time of year you’re planning your trip, these are great places to cool down. Doug and I were kayaking the day after Halloween rains brought a cold front. So while we had lunch at Maund Spring, we didn’t go for a swim. As Doug says in the video, Maund Spring is halfway between the Yancey and Magnolia Road bridges. It’s marked but not named on the guide; it’s the first spring after the Hinson Conservation and Recreation Area. 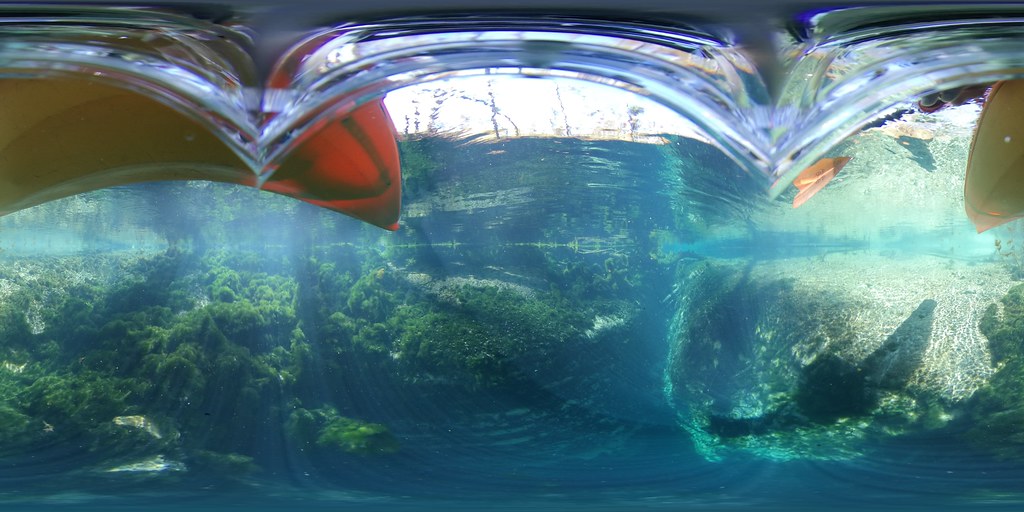 As Doug mentions in the video, there are over sixty springs feeding the Chipola. Six or seven of those are on Merritt’s Mill Pond, which feeds into the river through Spring Creek, just south of Maund Spring. This confluence is a nice spot where the cool, clear water meets the river. It’s also where, depending on the time of year, you might encounter a flotilla of tubers drifting down from Bear Paw.

The Ovens- a Dry Cave Right off of a Florida River

Before reaching Maund Spring, you’ll pass the Ovens. This is the truly unique feature of this paddling trail, at least for us Florida paddlers. It’s not marked on the trail guide, but you’ll find it on the Hinson tract.

“This is a small cave that is probably the only cave you can access- dry cave- from a Florida river.” Doug says. “So that’s pretty unique. It’s beautiful with big limestone boulders, and a lot of moss. Just right on the river.” 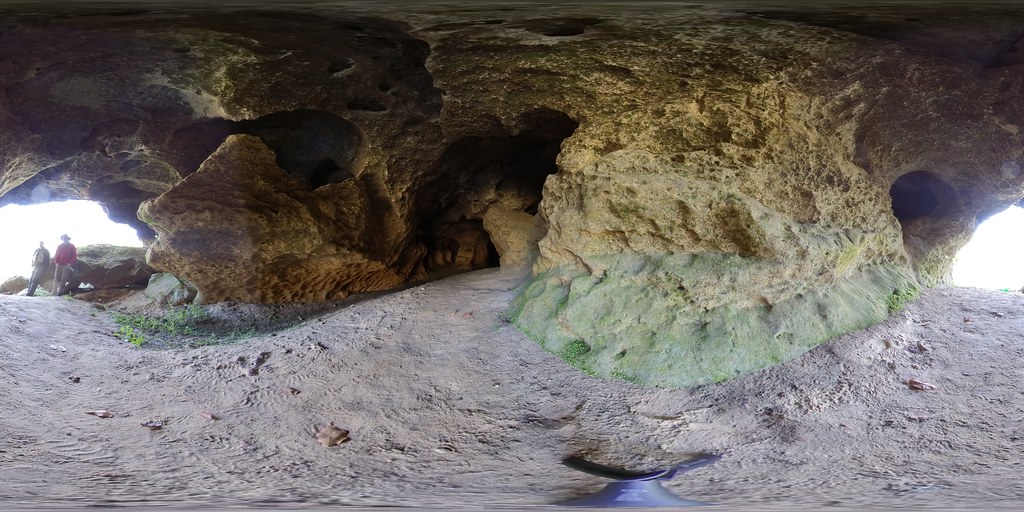 It’s a tricky spot to park your kayak or canoe and get out. But it’s worth it. Doug led me into the cave, which turns into a long, dark tunnel. If you’re planning on making this trip, you’ll want to bring a flashlight or headlamp.

There is also an access point on the Hinson property, down river from the ovens. You can take out here for a shorter trip than that in the video; it’s at mile 4.5. From the access point, you can hop on a four mile trail that’s on the Great Florida Birding Trail. So that’s another side trip you might wish to incorporate.

A River in Recovery

In many ways, this was an ideal trip. We went on a Friday, so we were the only ones on the water. And when the water’s quieter, you’re more likely to see wildlife, which we did. Our excursions outside of the kayak were top notch.

And yet, you can’t help but see the destruction wrought by Hurricane Michael.

“You’ll see the floodplain forest has been decimated by about 60-70% in most places.” Doug says. “So it’s been thinned out quite a bit.”

You can look at our Upper Chipola trip from 2016 for a comparison. Or some of the river shots from when we went hunting for salamanders in 2017. The forest is thinner now, and much more sunlight reaches you on the water. And even though the state spent a lot of time and money clearing the trail, you can still see broken trees almost anywhere you look. It didn’t detract from our enjoyment of the trip, but it was noticeable.

Doug sees glimmers of hope along the river banks, though. “I’ve noticed some of the trees that made it, especially some of the cypress and the live oaks, seem to be doing really well. They’re going to end up being some very dominant trees.” In our recent examination of Tallahassee’s urban forest, we learned that both of those species are among the most storm resistant of all trees. And if stronger hurricanes are indeed becoming the norm, our ecosystems will in time adapt. The trees that survive will pass on their genes.

It’s a process that will take generations. In the mean time, Doug advocates that ecotourists visit this river and the surrounding attractions, and buy lunch, get gas, and help out the local economy where the hurricane hit hardest.

Further Adventures in and Around the Chipola

This cypress lined pond was formed by impounding several springs; the dam keeps the water level at a consistent height year round. We paddled here in 2015, visiting a couple of springs.

Merritt’s Mill Pond is also a world famous cave diving destination. This is what brought us here in 2019, though not recreationally. Researchers had discovered a new species of cave crustacean here, offering a fascinating glimpse of life in the Floridan Aquifer.

This was, to say the least, an adventurous shoot. When we attempted it, in the Summer of 2016, several downed trees blocked our path. We did get to visit the reputedly haunted Bellamy Bridge, though. We also took a dip in Baltzell Spring, just north of Florida Caverns State Park.

While this trail was cleaned up shortly after we paddled it, it has not been cleared following Hurricane Michael, and the Florida Office of Greenways and Trails advises against paddling it at this time.

The Hunt for the Hillis’s Dwarf Salamander

This is as close as I had previously come to the paddling trail for a video. Dr. Bruce Means led us into a cypress swamp just off of the river. The swamp was fed by a seepage slope from which cool, clear groundwater dripped slowly down into the muck. Here, we searched for an animal that Dr. Means had newly described to science- the Hillis’s Dwarf Salamander.

The Dead Lakes aren’t lakes at all, though it looks like it when you’re out there. This section of the Chipola River was formed when a sand bar on the Apalachicola River blocked the mouth of the Chipola, backing the water up, widening the basin, and killing large swaths of forest land. No one knows for sure what caused this, though many believe a large hurricane and its storm surge are the likely culprits. Many dead tree trunks remain in the open water, which makes for a different kind of paddling experience.

Mistletoe | A Parasite for the Holidays (But Maybe We Like it Anyway?)