In the Grass, On the Reef Glossary

The terms on this page are not dictionary definitions.  Many of these words have meanings in other contexts; we are looking to clarify these words as they relate to the studies we are highlighting.

Amphipods: An order of crustaceans with compressed bodies, typically measuring less than 10 mm.

Benthic: Pertaining to organisms at the bottom level of a body of water, like a lake or ocean.  The benthic region starts at the intertidal zone and reaches to the depths of ocean trenches.  Oysters are benthic animals.

Benthic-Pelagic Coupling:  The cycling of nutrients between the lower, benthic region and the water column above it (the pelagic region).  Through this process, plankton is distributed and filtered through oysters, which live in the benthic region.

Benthos: Organisms dwelling on the floor of a body of water, such as seagrasses and scallops. 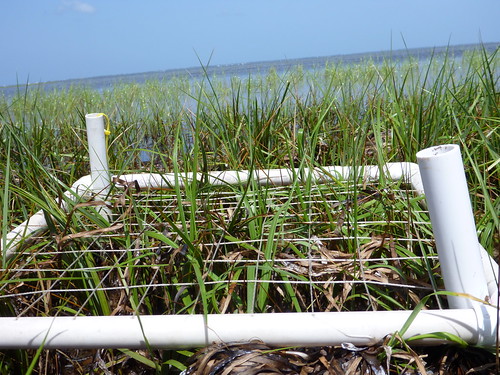 Using this quadrat, Dr. Hughes and her crew determine the biomass of select sample areas within a given marsh by counting blades of grass and other species in each square.

Cultch: A mass of gravel or broken shells upon which oysters can settle and form a bed. While oyster reefs are found in muddy places, an oyster cannot settle in mud directly, and needs a hard surface upon which to latch. Thusly, empty shells can be useful in replenishing and maintaining healthy reefs.

Epiphyte: A plant that grows non-parasitically on another plant.

Epiphytic Algae: Algae that grows on seagrasses.  These epiphytes may be causing seagrass populations to diminish.

Learn more about epiphytic algae and its effects on seagrass beds.

Food-web: The relationships between predator and prey within different habitats.  On this site we are concerned with salt marshes and oyster reefs. 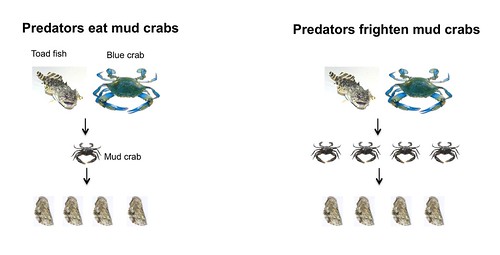 Fouling Organisms: Plants and animals that attach to hard surfaces under water, such as barnacles.  These hard surfaces can be the bottoms of boats and docks, oyster shells, and even blades of spartina grass.  They’re called fouling because they slow boats and “foul up” objects left under water. 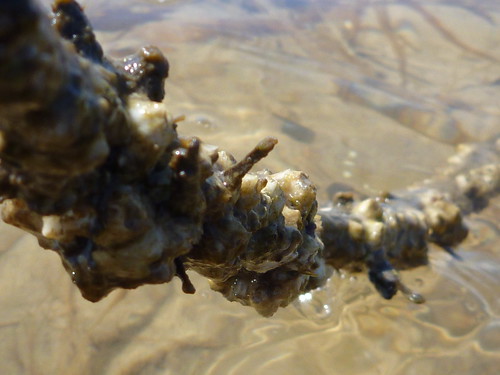 Barnacles growing on a branch in St. Joe Bay.

Gastropod: The largest group within the phylum Mollusca; includes snails, slugs, limpets, and sea hares. This diverse group contains many of the species in which we are interested on this site, from little plant eating periwinkles to the football-sized predatory horse conchs. 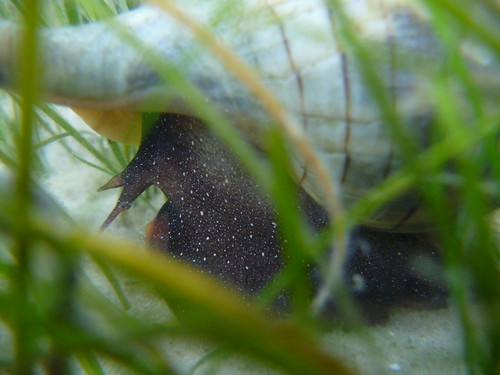 Genotype: The genetic make-up of an organism. In humans, each individual person is a unique individual.  In many plants, you can have multiple shoots (the above-ground portion of the plant) of the same genetic make-up that are connected underground; these shoots are basically copies of one another.  Dr. Hughes analyzes small snippets of DNA in the laboratory to tell if plants are one genotype or another, because it is usually impossible to tell them apart just by looking at them.

Hydrocarbons: Quite simply, a compound consisting of hydrogen and carbon.  These are the main components of petroleum, crude or refined.

Intertidal: A zone that is exposed at low tide and covered by water at high tide.  Alligator Harbor oysters are intertidal, growing alongside salt marshes and spending a part of their day exposed.  (contrast to Subtidal) 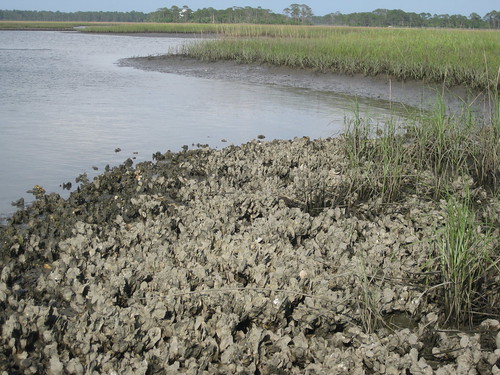 An oyster reef in Alligator Harbor at low tide.

Molting (or moulting):  When an animal cyclically loses and replaces parts of its body, such as dogs or cats shedding or crabs casting off and growing a new shell.

Monoculture: In agriculture, where this term originates, a monoculture refers to a plot of land in which only one type of crop is grown.  In terms of Dr. Hughes’ biodiversity study, it means a salt marsh (or experiment plot) with only one plant species- usually smooth cordgrass. (contrast Polyculture)

Morphology: The size, shape and structure of an organism.  For instance, when examining the morphology of cordgrass, one would look at how tall and full the grass is.

Operculum: A covering or lid. The term is used in describing various plant and animals; on this site it will likely refer to the covering snails use to seal themselves into their shells. The photo below is of a horse conch operculum. 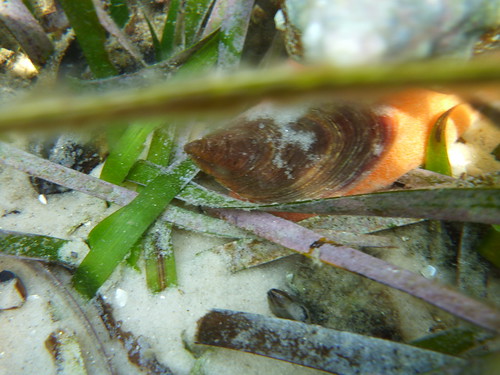 Looking somewhat like a bivalve attached to the tail of a horse conch, its operculum acts as seal behind which the conch can securely withdraw into its shell.

Pelagic: Referring to the area above the benthic zone, and away from the shore.  Essentially, the open sea.  The word is often used to describe fish living in the open sea.

Pelecypod: The class of mollusks that include bivalves. Most bivalves are filter feeders, taking in water and removing phytoplankton, circulating cleaner water back out. It is through this process that pelecypods such as oysters prevent a buildup of algae that can be lethal to marine animals. 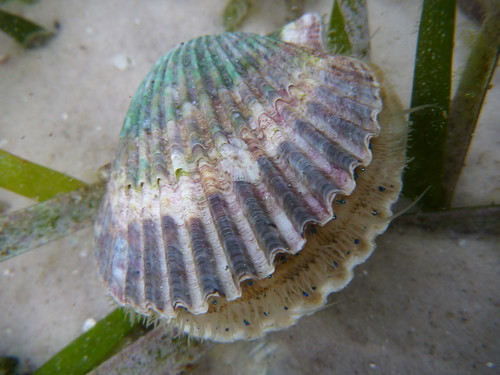 This bay scallop opens its valves slightly to let water in. If it senses danger for itself, it can release the water in a fast gush, and propel itself away.

Phytoplankton: Small, often microscopic plant life floating in water.  This is the food of filter feeders such as oysters, and a fundamental element of the marine food web.  It is also a major source of oxygen for our planet.  (contrast to zooplankton).

Polyculture: In agriculture this refers to a plot in which multiple types of crops are planted to mutually benefit each other (for example, a smaller plant needing less sun grows in the shade of a larger plant).  The concept is important to Dr. Hughes’ biodiversity study, as there may be benefits to having a more diverse marsh when disturbances such as an increase in seagrass wrack or the Deepwater Horizon disaster occur. (contrast Monoculture)

Proboscis: A long, tubular organ used for sucking, acting like the snail’s mouth.  Predatory snails often have a proboscis with which to pry open bivalves and suck out the meat. 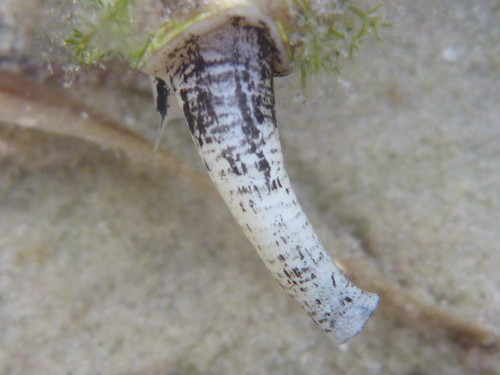 With its proboscis, a crown conch can pry open a bivalve and suck the meat out.

Radula: This is sort of the “tongue” of a mollusk, usually covered in thousands of little teeth that can be used to penetrate the defenses of prey animals.  Oyster drills, for instance, use their radula to pierce oyster shells.

Rhizome: A long, underground stem that puts out lateral shoots, such as grass.  The cordgrass visible in a salt marsh is the visible part of the plant; groups of these shoots are connected by the rhizome underground.

Seagrass Wrack: In the Summer, new seagrass grows and the older seagrass dies and washes up in on the coast in a large mat.  Dr. Hughes’ lab is studying the effects of wrack on salt marshes, where it kills expanses of grass.  This adds organic matter to the marsh sediment in the form of decomposed seagrass, leaves an opening for different marsh plants or genetic cordgrass individuals to grow in the marsh, and provides shelter and food for various organisms.

Learn more about the effects of seagrass wrack on the salt marsh habitat. 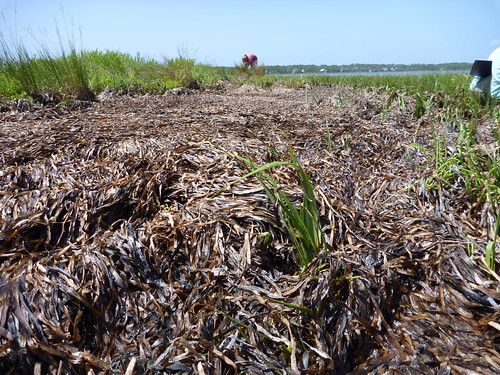 Seagrass wrack in St. Joe Bay, appx. 1 month into scallop season.  During scallop season, the bay seas an increase in motorized boat traffic.  Even at high tide the bay can be shallow; at low tide, boat propellers can drag in the seagrass, uprooting extra seagrass and leaving long scars in the beds.

Sessile: An immobile organism, fixed on a single location.  Oysters are sessile organisms.

Spat: A larval oyster, existing as plankton, that settles on a reef and grows a shell.  Also known as an oyster recruit.

Subtidal: Occupying a position off shore that is covered by water regardless of the tide.  Oysters in Apalachicola Bay are subtidal, and long tongs are required to harvest them.  (contrast to Intertidal)

Trophic Cascade: The abundance and health of a species at the top trophic levels (a large predator) has an effect that ripples through lower levels to species that may not even be directly linked to those at top levels.  For instance, in an oyster reef lacking large predators like sharks or hardhead catfish, there may be more crabs that eat oysters, leading to a less healthy reef.

Trophic Level: The position which an animal or group of animals inhabits in a food web.  In an oyster reef, large predators like blue crabs and hardhead catfish occupy the top trophic level, while mud crabs and oyster drills occupy a middle level as they are prey to the animals in the top level but feed on oysters. Oysters, polycheates, and amphipods occupy the bottom trophic level.

Zooplankton: Small, often microscopic animals floating in water.  Many aquatic animals, such as oysters and many species of shrimp, start life as zooplankton.  (Contrast to phytoplankton).

This and all other pages in the Scientific Resources menu will be updated and expanded over time.  If there is any information related to the topics covered in this blog that you would like to see, let us know by leaving a comment.