Why is Dr. Kimbro selecting smaller reefs to study?  How big is a mature oyster?  Watch and find out.

In my previous post, I outlined my original reasons for being out on the reef. Although I’m still pursuing those goals, my lab is currently busying itself on the reefs with some newly formed research goals. Anticipating the arrival of oil, we’ve scrambled a lot over the last few weeks to come up with questions and methods that will allow us to understand how the oil affects oysters as well as the assemblage of other important species that it supports. 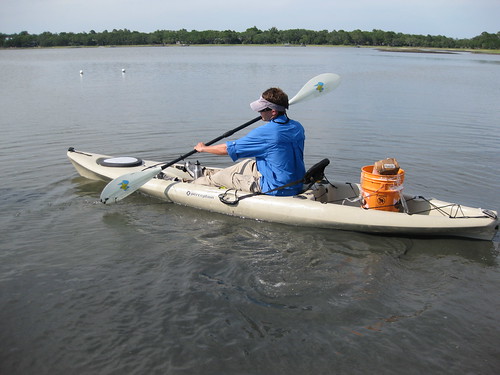 Step number one in gearing up to study the impacts of oil and to launch our original project involved figuring out a better way to transport a lot of people and gear out to the reefs during low tide, where shallow water prevents boating and deep mud prevents walking. My lab now uses a fleet of kayaks to zip around all the oyster reefs within Alligator Harbor, which sure beats sitting in highway traffic.

Now, once you see our study reefs (patchy, small and next to marsh), if you are a local, you must be thinking that we’re crazy for sampling these puny little things instead of the massive mudflat reefs that are more isolated from the marsh. And I wholeheartedly agree. However, my other colleagues studying oysters in VA, NC, SC, and GA don’t have big massive reefs like these anymore thanks to a much longer and more destructive history of harvesting, dredging and disease. So, to complete our original research goals and to compare things among many different estuaries, we are using the lowest-common-denominator reefs among all of our estuaries: hence the small and patchy little reefs we selected.

Ok, now we’ve figured out how to access our sites and we’ve selected our reefs. Although the latter sounds simple, it’s actually been pretty messy: kind of like my first trying to walk out to the oyster reefs in Alligator Harbor! Using global positioning system (GPS) and Google maps, my colleagues and I have been remotely weighing in on which reefs to use based on whether particular reefs are too large, too small, too close to the ocean, too far from the ocean, exposed to too much harvesting pressure, or exposed to too much pollution. Again, in order to learn how similar food webs operate and affect oyster reefs differently over long distances, we need to make sure that we are comparing apples to apples, not apples to oranges or young oyster reefs (nothing but small oysters) to old oyster reefs (nothing but large oysters) or polluted oyster reefs to pristine oyster reefs.

Over the past week, we’ve not only selected oyster reefs within Alligator Harbor to be part of our original oyster study, but we also set up additional oyster reefs to study the impacts of the oil spill. This involves permanently establishing areas within reefs that are censused for the number of dead and living oysters before the oil hits. Then, when the oil hits, we determine if the number of dead oysters increased.

But, even if we see more dead oysters than live oysters in the future, how do we know whether the oil (rather than some other factor) was the cause? 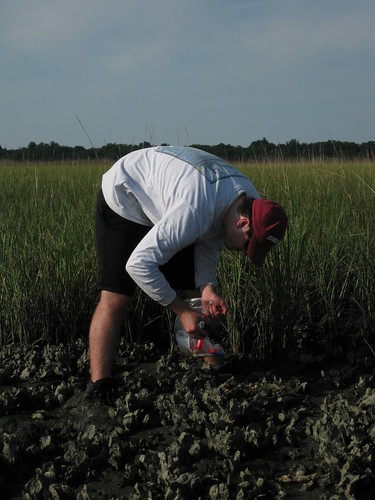 Well, we are also taking water, sediment, and oyster samples to be processed for stable isotopes. In short, chemical elements (e.g., Carbon, Nitrogen) exist in different forms (i.e., isotopes) and oil hydrocarbons have a Carbon isotope that can be used like a fingerprint.

So, we are also sampling the environment (water and sediment) and the whole food web centered on oyster reefs to determine background levels of oil. Then, when the oil hits we should see a tremendous increase in a new oil signature (that from the Deepwater Horizon spill) that coincides with negative impacts on oysters.

But, in addition to oysters themselves, we are also interested in the predators and prey that it supports. Because we do not yet have a lot of data describing when and how many predators and prey are around and because there is no way to get that data in time before the oil arrives, we are using other stable isotopes to quickly describe how predators and prey are organized within the oyster food web: who is eating whom. The isotopes of Nitrogen are good for this because the form of Nitrogen changes as it passes up the food web from things like oysters to things like big crabs and fishes. So, our second new question is… who has been eating what and how does this organization, which took a long time to develop, change immediately and a few years after the oil spill? Pursuing this new goal has involved some pretty fun hunting of all sorts of critters that make up the oyster food web such as amphipods, polychaetes (worms), clams, mussels, mud crabs, snails, blue crabs, stone crabs, and fishes. We just finished sampling Alligator Harbor and are now off to do the same things in Cedar Key, St. Augustine, and Jacksonville.

Because these four sites in Florida will likely experience much different levels of oil, we will be able to learn how much oil is required to negatively impact oyster reefs and the community of animals that they support.