In many of our previous posts, we focused on how predator patterns may dictate why oyster reefs look different from NC to Florida. While a cursory look at results thus far supports this hypothesis, we’ve yet to consider alternate explanations. And failing to consider alternatives would not be very objective or scientific. After all, our job is to collect a lot of data and perform a lot of experiments that could possibly refute our predator hypothesis. Only by surviving all of these data and tests can our hypothesis gain strength, and of course it can never be proved. 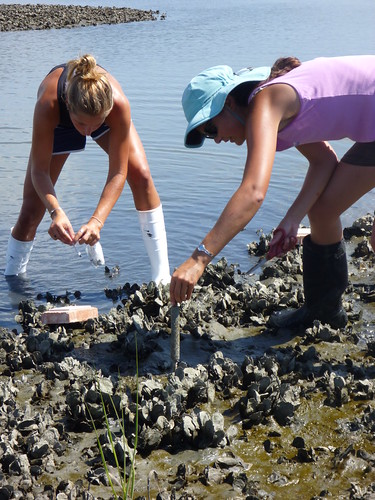 Hanna takes sediment samples while Tanya ties a new spat stick onto a PVC pipe.Ok, enough with the philosophical reasons for why we began collecting different types of data on our reefs… what kind of data did we collect and what are their potential roles in creating different looking oyster reefs?

At each of our sites, we first took a bunch of water samples and then made a big fuss over them in the lab to determine how much of food is available for oysters in the water. Although coastal waters around here are typically considered to be dark and dirty, much of this murkiness is created by algae that use light and nutrients in surface waters to grow. Oysters make a good living in this murky environment because they suck in the water, filter out the dirt, and consume the algae; hence the term ‘filter feeder’. So, perhaps differences in the quality and quantity of algae may explain why certain sites have more or larger oysters than do others. We took lots of water samples to test whether this is the case. We’ll keep taking these water samples every month to see if any differences are constant through time versus seasonal. 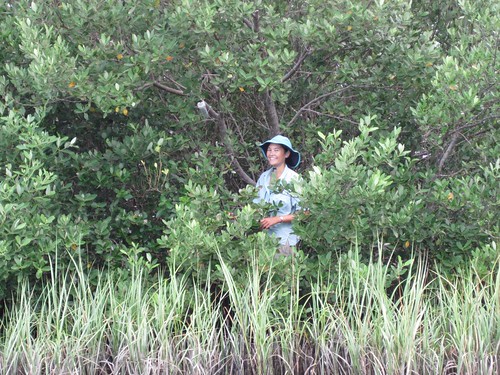 Tanya places a data logger away from the reef. The data retrieved from this device will be used to correct data collected to one placed on the reef.

The second data we collected concerned each site’s water temperature, which is being monitored by a fancy instrument that is the size of a big pen. Water temperature could explain differences in size/growth of oysters among sites, because cold temperature can slow down an oyster’s metabolism and growth while warm water can speed them up. But in addition to water temperature, this instrument also records differences in pressure. To eventually convert this pressure data into tidal submergence data, we dress up the instrument with a waterproof bag full of freshwater (salt water kills instruments fast). We then put a ‘naked’ instrument nearby that is never in the water. While both instruments record changes in pressure, which can be due to changes in water depth and atmospheric pressure (storms), the naked instrument only records changes in atmospheric pressure. So, we correct the one on our reefs with the one nearby to get a picture of changes in pressure due solely to water depth or tide. So, who cares? Well, longer or more frequent submergence will expose oysters to more algae in the water. In addition, during long and hot summer afternoons, more submergence may lessen the stress that oysters feel during low tide. We’ll keep collecting all of these data on a monthly basis, because it’s possible that tides, food, and temperature individually and in concert affect the growth and size of oysters at each site. 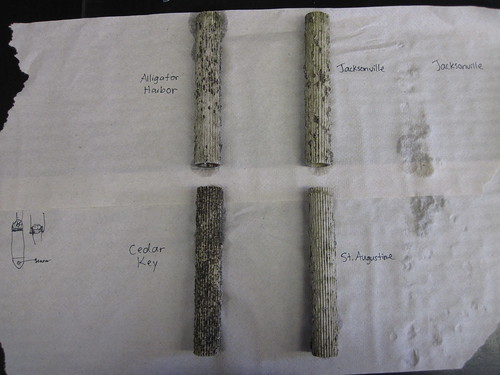 These four "spat sticks" are meant to sample how many oyster larvae are settling on reefs at each of David's four sites.

Finally, the third type of data we collected was provided by some funny looking ‘spat sticks’. Spat refers to really young oysters that just recruited into an oyster reef (also referred to as a ‘recruit’). Oysters have a really cool life cycle in which male and female adults release eggs and sperm into the water. There, they meet up and undergo fertilization that in turn creates an algal eating larva (planktotrophic larva). After a while of floating in the water and eating algae, the oyster larva will then ‘recruit’ into a reef and turn into a spat. I hope they like our spat sticks! Differences in the number of spat on our sticks across sites may indicate that oysters at one reef produce more larvae than do oysters at another reef. Or, spat differences may mean that tides/currents simply concentrate larvae from all reefs but deliver them to only a few reefs. Interestingly, we already saw that oysters up north are doing things very differently than oysters in Florida: lots of recruitment in Georgia/South Carolina but no recruitment in Florida.

This is what we’ve been up to for the past few weeks.

See you next time,
David

I do a lot of spat work with scallops up in New York, and was considering your spat collection apparatus. Now, I am not familiar with spat collection for oysters, but I wonder if your Florida reefs have a different suite of predators more suited for accessing the spat on your spat sticks. In one of my experiments looking at scallop spat recruitment , I place out collectors in which half of the collector is enclosed in a mesh bag (~1mm) and the other half is exposed to the environment, and look at the differences (scroll to the bottom of the link where I talk about this). I wonder if you enclosed some of your spat sticks, if you would be seeing the same results. I think it would solidify your argument of predators being the key drivers in the differences between sites if oyster spat availability was the same across all sites (those collectors enclosed), but survival was different (those left exposed). Just an idea.

Sorry, apparently my html code is a bit rusty. Here is the link I was referring to:
http://zostera.blogspot.com/2010/07/recruitment-variation-and-benthos.html

Interestingly, when I was doing graduate work on oysters in a California estuary, we found that areas with little oyster recruitment (close to the ocean) also had the highest levels of predation. So, even if lots of oysters did settle in parts of the estuary closer to the coast, they would quickly get depleted by predators; this lines up with your scallop experiment. However, oceanographic processes rarely delivered oyster larvae to these regions. Kind of a cool this could, but rarely happens story. Looking forward to figuring this all out!

[…] traps larger fish and crabs, click here.  To learn more about what the Tile team will be doing, click here.  And if you click On the Reef under categories in the sidebar, you can track David’s […]

[…] and traps larger fish and crabs, click here. To learn more about what the Tile team will be doing, click here. And if you click On the Reef under categories in the sidebar, you can track David’s progress […]

[…] and traps larger fish and crabs, click here. To learn more about what the Tile team will be doing, click here. And if you click On the Reef under categories in the sidebar, you can track David’s progress […]