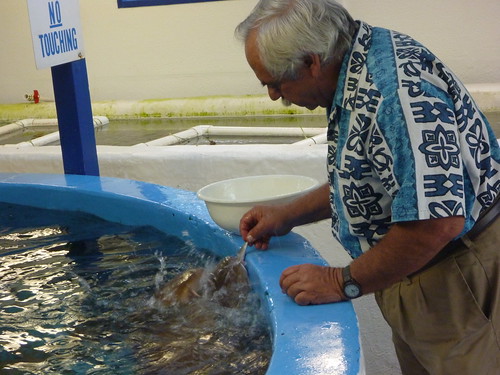 If there’s one thing we have learned in 3-plus years of doing this project, it’s that everything eats blue crabs.  If you’ve watched our videos over the years, you’ve seen a gull eating one on Saint George Island.  You’ve seen (and heard) a loggerhead turtle crunch into one.  And in the video above, two octopi wrestle for the tasty treat at the Gulf Specimen Marine Lab in Panacea, Florida (That turtle shot was taken there as well, a few months back).  Lab founder Jack Rudloe spent some time with us, feeding sharks, hermit crabs, and various fish species.  It gave us a great chance to see many of the species that we cover in this blog, and many that we don’t, in action.

In the 50 years since Rudloe founded Gulf Specimen, the facility has served an eclectic range of services.

Its aquarium features many of the small critters that we’ve chronicled Randall and David studying in Alligator Harbor, Saint Joseph Bay, or Wakulla Beach.  You won’t see any orcas doing backflips for a fish treat.  These are the creatures of our coasts, many of them common (like fiddler crabs), some of them rare (like a white blue crab).  If it’s safe to touch the animals, you can (consult the signs on the tanks). 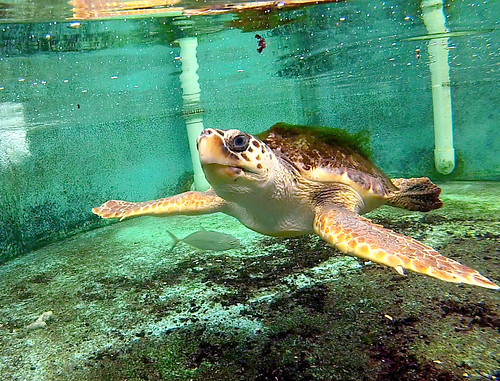 For almost as long as its been open, Gulf Specimen has run a Sea Turtle Program to rehabilitate injured loggerhead and Kemp’s Ridley turtles.  They release 15-20 a year, many of which have swallowed fishing hooks.  The turtle in the aforementioned video is Allie the Loggerhead, released after a year in their care (full story here).  The loggerhead that tries to eat our GoPro camera in the video above is Little Girl, who is on display right now.

And then there’s the reason the lab was originally created, to provide specimens of animals to researchers, both medical and academic.  This keeps animals coming in and going out, so that the critter lineup remains somewhat fluid.

In their outreach in education initiatives, their goals mirror our own on the In the Grass, On the Reef project, only in a more up close and tactile manner.  They want you to know about the critters and their habitats, the threats facing them, and the benefits they provide us.  With their Seamobile, they can take that mission (and the critters) on the road to events like the St. Marks Stone Crab Festival.  After people crack open their claws, they could go and learn about the world their food had inhabited.  After the last year we have learned that this food only gets on your plate when there is a balance between these animals and their environmental conditions.  Sometimes, that balance is off, whether it is an overabundance of oyster drills in Apalachicola or, as we see in the video, octopus in crab traps.  It’s one thing to hear that crabs are being eaten.  It really comes alive, though, when you see it happening.  That’s mission we share with the Gulf Specimen Lab.

Over the next few months, we’ll be seeking out others who work to bring the big, wild, messy outdoors to you.  Is there anyone that you think we should be talking to? Let us know! What is that octopus hiding under its tentacles?