Wednesday, January 18 at 7:30 PM/ ET, watch WFSU’s latest EcoAdventure on dimensions, as Green Guides George Weymouth, Jim Dulock, and Cynthia Paulson guide us down the Wacissa River.  Birds, springs, and art- you can read more about that below, and enjoy this video looking at how George- a well known painter and sculptor in our area- creates his hyper-realistic works. 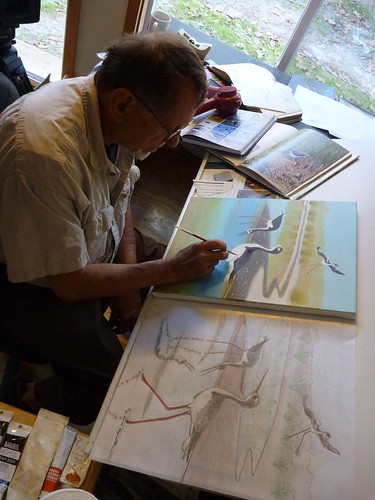 In the interest of being intensely accurate, George's painting area is surrounded by field guides and nature magazines.

George Weymouth is telling me how he is going to paint the ripples caused by a black-necked stilt’s (Himantopus mexicanus) wading in a river, and how the the avian subjects of his painting reflect over the disturbed water.  When he’s done getting the shape of the bird’s body, and the general coloration, he’ll add various feathers- primaries, secondaries, and tercials; all located at the anatomically appropriate places on its body.  Something occurred to me as I edited this footage into the above video:  when I had accompanied George down the Wacissa River the week before, he was looking at whole different world than I was.  A man who can accurately paint every feather on a bird is likely to have a unique perspective.

I visited George’s home studio intending to make his art a major part of the EcoAdventure that will air on dimensions tomorrow.  I touch upon it briefly, but with only five minutes to work with, you have to pick and choose what makes the best and most coherent story.  Did I want to leave out the underwater footage of the springs that feed the Wacissa River?  Would I cut the scene where ibis frolic in the water lettuce and wild rice?  Could I cut back on shots showing the camaraderie between George and his fellow Green Guides, Jim Dulock and Cynthia Paulson?  In the end I couldn’t, and so we have this web exclusive video. 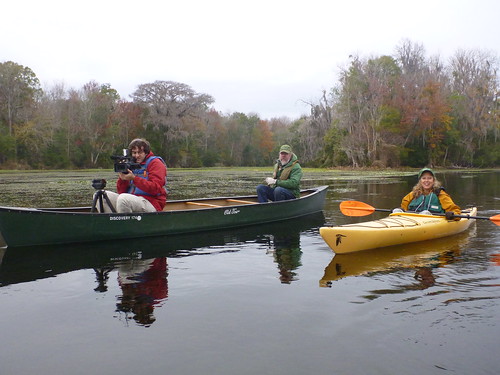 The Wacissa offers a lot to a bird man like George.  When I was editing the dimensions segment, there was rarely a shot in which I didn’t hear bird calls layered over each other.  Birds were everywhere, even though it was winter and so many had already migrated south.  George picked out different calls, and imitated them, and told us more or less in what month certain birds would come back and when others had left.  On this trip, he had the wildlife aspect covered.  But he usually paddles around the Wakulla River, and so Jim Dulock (who runs the Wacissa Springs Livery) made sure we got to the good places.  He took us to a couple of those springs that provide the river’s clear water, including the fifty-foot deep Big Blue Spring.  He also deftly paddled me through the water lettuce to those ibis I mentioned before, so that I could get a good close shot.  And he provided the canoes and Cynthia’s kayak. First, George sketches a layout to use as a reference for the painting. He created this sketch from memory, but when he gets to the final phases of painting individual feathers and leg scales, he'll refer to photos in field guides.

But back to George’s studio, where I’m thinking about the finished works of his that I saw.  You’ll see more detail than you’re likely to see with the naked eye in nature.  The birds on the side of the river, or wading at the edge of a marsh island, they have all the feathers and leg scales that you see George painstakingly add to his paintings.  You’re just not likely to be able to see them individually from your kayak.  It’s fascinating to watch his process; I especially enjoy the attention to how the birds interact with the water, the ripples and reflections, and how their legs look as they fade from visibility beneath the surface.  It’s one of things I love most about filming marine animals, especially since we’ve gotten HD cameras.  Of course, nature and the sun’s light do a lot of the work for me.  Not having to envision and actualize the highlights of each little wave, I’m a little more removed from it than he is.  I’m realizing that I may never have the kind of connection George has nature, because I’ll never see it the way he can.

The music in this piece was created by Philippe Mangold.

In the Grass, On the Reef, A World Away

Susan Cerulean’s New Book: I Have Been Assigned...

[…] above aired on dimensions, several individuals in our community took note of a statement made by George Weymouth.  He was explaining how hydrilla, an invasive plant species overtaking rivers in our state, had […]