EcoShakespeare is a series of adventures through north Florida/ south Georgia ecosystems.  During each trip, adventurers view a scene from A Midsummer Night’s Dream, each with its own significance to the day’s habitat.  Florida State University English professor, Dr. Bruce Boehrer, ties it all together. A Suwannee cooter turtle swims among mats of algae in a sinkhole connected to Wakulla Springs.

While editing the video above, I kept hearing the Standell’s Dirty Water  in my head.  It’s a strange sort of ode to Boston, with its chorus, “Love that dirty water, Boston you’re my home.”  It refers to the polluted Charles River and contains some other less than flattering Bean Town references, but that song and Sweet Caroline are staples at Red Sox games (my wife and I were married in her native Massachusetts, where both songs were loudly sung along to during the reception).    Looking at shots of algae mats, the garbage piled into Lake Henrietta, and, most sadly, algae covered turtles, I don’t feel like writing even satirically about loving the quality of the water heading south to Wakulla Springs.  Instead, I offer you a song written by William Shakespeare for A Midsummer Night’s Dream (and arranged by Southern Shakespeare Festival’s Stephen Hodges).  In it, Titania’s fairy servants call upon Philomel the nightingale to protect her as she sleeps in the woods.

We won’t be interpreting the song literally, because what’s the fun in that?  The fairies are attempting to ward off what Dr. Bruce Boehrer calls “beasts of ill omen:” spiders, snakes and snails.  In the Wakulla Springs ecosystem, though, these are important members of the food web.  Our beasts of ill omen are defined by Madeleine Carr, President of the Friends of Wakulla Springs: dark water, hydrilla, and algae.  The creatures mentioned by name in the song actually need protection themselves from these threats to the spring.

When I was meeting with our partners at the Southern Shakespeare Festival to plan EcoShakespeare, one of the themes we wanted to explore was the Victorian concept of the Great Chain of Being. I had a wonderful brainstorming session with Lanny Thomas and Laura Johnson, the Artistic and Executive Directors of the Festival, and Wakulla Springs seemed an ideal place to filter through Shakespeare’s worldview. On the shores of Lake Munson, Titania’s fairy attendants sing a song to protect her from snakes and spiders. Lake Munson is Tallahassee’s most polluted lake, receiving nitrate filled runoff and having previously been a dumping ground for sewage and industrial waste.  Lake Munson feeds Wakulla Springs through the Munson Slough system.

In the Victorian Great Chain, order in the world is maintained by God and queen.  It’s a top-down model.  You see this at play in A Midsummer Night’s Dream.  Oberon and Titania, as king and queen of the fairies, are a type of nature deity.  Their marital discord upsets the skies and the seas, causing problems for plants and animals.  That upheaval moved from the top-down.  But nature often operates from the bottom-up.  Hydrilla entered Wakulla Springs State Park and crowded out apple snails, which deprived one of the park’s showy attractions, the bird on its sign, of its food. So the limpkin left, and has been gone almost two decades.  That problem moved its way up the chain, not down.  Likewise with algae.

Jim Stevenson leads our pursuit of water as it flows south from Tallahassee and collects contaminants.  One contaminant, nitrates, feed a microscopic plant, algae, which accumulates in the water.  It forms mats which block out the sun for native marine plants.  It blooms and sucks the oxygen out of the water, killing fish.  Those fish in turn are meals for birds and other larger animals, the ones tour guides point out on Wakulla Springs boat rides. Jim Stevenson was once chief biologist for Florida’s State Park Service. In retirement, he has become a fierce advocates for the state’s springs. At the water Treatment facility on Springhill Road, he explains how sewage effluent was treated and piped to spray fields that had been feeding nitrates into the Wakulla Spring system.

Of course, algae and hydrilla didn’t decide one day to become a nuisance and wreck the spring.  Hydrilla is an asian import, an aquarium decorative that found its way into American rivers.  It was introduced by humans.  Nitrates originate from people, too, often right within us.  It’s in our poop, which we like to think disappears to a fairy realm once we flush it down.  That’s just not true.  Utilities have to figure out how to sanitize and dispose of that waste, and the City of Tallahassee’s solution had inadvertently been putting nitrates directly into the aquifer.  They have spent a lot of money to fix that problem.  Nitrates also come from the synthetic poop substitute we use to make green lawns and larger tomatoes.  This assault on the aquifer starts in our homes and is carried by storm water down the streets and into lakes and streams.  Many Leon County lakes have sinkholes directly depositing water in the aquifer; many of our streams flow south into the Woodville Karst Plain, where sinkholes abound.
So, top-down and then bottom-up.

Shakespeare’s portrayal of a world controlled by the emotions of fairies is probably more fun than our reality of poop, algae, and invasive hydrilla.  Still, with his imagination, and his often wicked sense of humor, I can only imagine that he would craft something simultaneously tragic and comedic from what has happened in Wakulla Springs.  In the play, the gentle sea cow, the manatee, comes in and saves the day by coming in and eating the hydrilla in the spring run.  In reality, the power to fully save Wakulla Springs lies closer to the top of the Chain of Being, with the humans living in the Wakulla Springshed.

EcoShakespeare and the Wakulla Springshed

It just so happens that our three EcoShakespeare adventures move southward through the geological regions within the Wakulla Springshed, illustrating the different ways we interact with our aquifer depending on where we live. 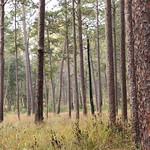 In our first adventure, we visit the “Big Woods,” a private forest outside of Thomasville, Georgia containing a tract of old growth longleaf habitat.  This is in the heart of the Red Hills region, in which a layer of dense red clay sits atop the aquifer, slowly filtering water.  It’s referred to as the streams region of the Wakulla Springshsed because much of the rain that falls on it doesn’t actually recharge the aquifer, it just flows away on rivers like the Ochlockonee and Aucilla.  According to the Wakulla Spring Restoration Plan (released by the Howard T. Odum Spring Institute), this region adds about one inch of water per year over 770 square miles to the Floridan aquifer. 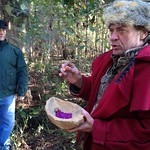 We follow Colbert Sturgeon down from Tall Timbers to Lake Iamonia (sounds kind of like ammonia), foraging for natural edibles along the way.  Lake Iamonia is one of four major sinkhole lakes in the Red Hills region.  Here, we still have that thick red clay to filter our water, but we also have four direct inputs to the aquifer that bypass the clay.  These lakes are Iamonia, Jackson, Lafayette, and Miccosukee.  This region adds eight inches a year over 250 square miles.

Last spring, we played on Lake Iamonia and hiked Klapp Phipps Park, which protects Lake Jackson.  In that video, we looked at our lakes and their relation to the aquifer with Tall Timbers and some other friends.  A couple of months later, we looked at the cleanliness of our lakes by reviewing Leon County’s 2011 Water Quality for Selected Lake and Streams report.  They have since published an updated report, which you can view here (the reports are long; you can use our blog post containing the older data as a guide to the information in the newer report).

Also known as the Cody Scarp, this is Florida’s ancient shoreline (and maybe, with sea level rise, its future shoreline).  This is where the Red Hills end, and our aquifer sits nearer to the surface.  This is an important dividing line when thinking about how water penetrates the limestone beneath us. 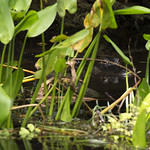 Even those of us living in the very south of the Red Hills see our water roll down the Cody Scarp and into the more porous WKP.  Rain is more directly in contact with the limestone aquifer here, and so that limestone is more likely to collapse and form a sinkhole.  There is little filtration here.  In the Red Hills, many contaminants are removed in the ten years or so that it takes to flow through the clay; in the Woodville Karst Plain everything flows right in.  This is the most vulnerable part of the Wakulla Springshed.  This region recharges the aquifer at a rate of eighteen inches a year over 145 square miles.

I’d like to take this opportunity too thank all of our partners in the venture.  Tall Timbers Research Station and Land Conservancy, Palmetto Expeditions (for whom Jim Stevenson leads the tour we feature in the video above), and the Friends of Wakulla Springs.  I’d also like to thank Colbert Sturgeon for enlightening and entertaining us, and FSU Professor Bruce Boehrer for the way in which he tied all of our crazy elements together.

Most of all, I would like to thank the Southern Shakespeare Festival.  Projects with this kind of unique twist are always great to work on, and more so when you can collaborate with people like Lanny Thomas, Laura Johnson, Kevin Carr, and Stephen Hodges.  Michele Belson designed the costumes worn by our uncredited performers, who braved some cold and windy weather to bring this project to life.  The SSF performances of a Midsummer Night’s Dream will take place from April 17-19 in the very place that the video above begins, in Cascades Park.  You can watch their groovy 60s take on my favorite Shakespeare play, and then gaze at the water flowing from beneath the stage and watch as nitrates feed algae (seriously, that’s what that waterway was meant to do.  Please do not touch it!).  It promises to be a doubly educational experience.

Hiking the Aucilla Sinks | Geology of the...