Over the last few weeks, we’ve explored the concept of the ecology of fear on oyster reefs. But, as David asks in the video, “does it matter?” Exactly how much does fear affect oyster filtration, or their ability to support commercially and ecologically important species? And how does fear affect the benefits we receive from ecosystems such as salt marshes and seagrass beds? Coming up, we see how David and Randall took these big questions and broke them down into a series of experiments and investigations geared at creating a clearer picture of fear in the intertidal zone.

A few weeks ago, we had a bayside conversation about the important link between nutrients and oysters. But there is something else that may dictate whether a reef thrives: predators.

Academically, the importance of predators dates back to the 1960s. Some smart people proposed that the world is green because we have lots of big animals, which eat all of the smaller animals that would otherwise consume all the plants…hence the green world. 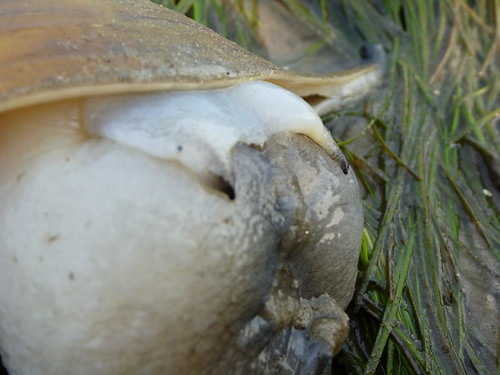 Busycon spiratum eating an Atlantic Moon snail on Bay Mouth Bar. These seagrass beds off of Alligator Point are home to the greatest diversity of predatory snails in the world. In the late 1950s and early 1960s, Dr. Robert Paine investigated the effect of the horse conch, the most dominant predator among the snails, on the habitat. David and his crew have similarly used the dynamic invertebrate population to test their theories on the ecology of fear. (click the photo for more on Bay Mouth Bar).

Now, that’s a pretty simple yet powerful concept.  Since then, lots of studies have tested the importance of predators and how they keep our world spinning. For example, Bob Paine relentlessly braved the icy waters of the NW Pacific for a decade in order to chunk ravenous sea stars from one rocky cliff, but not the other. After several years, the cliff with sea stars still had a tremendous diversity of sea creatures (algae, anemones etc.) and the cliff without predatory sea stars did not. The absence of sea stars allowed pushy, bullying mussels to outcompete all other animals for space and this gave the rocky cliff a uniform and boring mussel complexion.

The same concept has been tested on land. Ripple and Beschetta showed us why the national parks out west no longer have the really important and woody trees (aspen, willow, and cottonwood) that they historically had. By suppressing wolves for the last 50 years, we allowed elk numbers to explode and the elk have overrun the really important woody species.

But predators don’t just eat.  Enter my vivid memory of trying out for the Nash Central 8th grade football team in rural North Carolina. Contrary to my father in-law’s belief (who is a hall of fame football coach in Georgia), I wanted to play football instead of soccer.  But when it came time for try-outs, fear prevented me from pursuing this line of work.  To practice breaking tackles, each player had to lie on the ground and the rest of the team formed a circle around this player.  Unbeknownst to the guy on the ground, the coach secretly selected three players to tackle the football player at the sound of the whistle.  For twenty minutes, I watched physically un-developed friend after late-blooming friend get crushed by other guys who were definitely not late bloomers. The sights and sounds of this drill kept me nauseous until it was my turn. When my turn came, I couldn’t deal with the fear, didn’t perform well, and consequently became a soccer player.

My point is that fear is very powerful. Of course, I knew the charging football players were not going to eat me. But if I was paralyzed with fear from football, then imagine what it’s like for something that has to worry about being eaten. Going to back “the world is green” story: what if we overlay the concept of fear on that? How does the story change?

Well, the next generation of predator studies has examined how the fear of predators can be just as important as the appetite of predators. In addition, because predators can only eat only one animal at a time but can simultaneously frighten many more, fear can create powerful “remote-control effects”. In Australia, the fear of tiger sharks causes dugongs to avoid certain depths in a bay. As a result, only a small portion of the seagrass beds get grazed down by dugongs, possibly being one of the main reasons why areas like Shark Bay still have huge and lush seagrass meadows. Mud crabs (like the one pictured here), oyster drills, and crown conchs are the primary consumers of oysters on the reef.

For the next few weeks, we will look at some work that my friends and I have conducted for the past three years on how predators and the fear of predators influence oyster reefs and the services that they provide us throughtout the southeast. Although we have the same predators and things that like to eat oysters from North Carolina to Florida, we suspect that differences in the environment will cause the effect of predators to play out differently.

In parting, I just want to say that this predator stuff is really interesting and I think it’s very important for oyster reefs. But of course, when you are dealing with an ecosystem that may be on the verge of collapse like Apalachicola Bay, the distinction between the appetite and fear of predators may not matter that much. But, we will soon see because we are now investigating this important system too. We’ll be following the Apalach study as well. Here, Stephanie Buhler, who we had previously seen diving in Apalachicola Bay, welds a cage to house an upcoming experiment in that research. It’s a variation of the tile experiments that became such a staple of the NSF oyster study. In a few days, we break down the tile experiment, and David’s collaborator, Dr. Randall Hughes, talks about what the results are telling them so far.

Music in the video by Revolution Void.

I am sure you will get to this at some point, but does the effect of fear in suppressing predation of the mesopredators change with hunger and/or food supply?

I know James Gilliam did some nice studies which demonstrated that if the reward increased (i.e., more food), the predator would forage in a riskier habitat. I am sure a similar thing would happen if the mesopredators were starving. Is this something you guys were able to control/test in these experiments?

[…] that visit oyster reefs may help maintain reefs and the services they provide (check out that post here). My ivory-tower mission was to see if the benefits of predators on oyster reefs change from North […]

[…] oyster reefs work and it only contained a few ingredients: predatory fish frighten crabs and this fear protects oysters….a beautiful trophic cascade! But years later, we figured the recipe was too simple. So, we […]