As we’ve been getting this post ready, David’s Apalach crew (Hanna, Stephanie, and Shawn) has begun deploying the experiment featured in the video above in Apalachicola Bay.  After years of perfecting it, the tile experiment has become a key tool in Randall and David’s oyster research.  As you can see, there were some headaches along the way.

If you’d like to know more about spat (young oysters), we covered that a few weeks ago in this video. One of the primary goals of several projects in our labs involves figuring out where oysters grow and survive the best, and if they don’t survive, why not? Sounds pretty basic, and it is, but by doing this across lots of sites/environments, we can start to detect general patterns and identify important factors for oyster growth and survival that maybe we didn’t appreciate before. Our method of choice for this task is to glue the oysters to standardized tiles, place some in cages to protect them from predators, leave the rest to fend for themselves, and then put them in the field and see what happens over time.

In doing this lots and lots of times, we’ve learned who in the lab has a special knack for placing small drops of marine glue – Zspar (which you can see in the video) – on tiles, and who is better at adding the oysters so that the 2 valves of their shells don’t get glued shut. These are the sorts of crazy job skills that don’t go on a standard resume!

Any of you who have been following the blog for a while may remember the craziness of the our first NSF tile experiment (Tile 1.0) in the fall of 2010, which involved collecting lots of juvenile oysters (“spat”) that had recently settled in the field, bringing them back to the lab, and using a dremel to carefully separate that from the shell they settled on. (If you don’t remember and want to check it out, go here.) 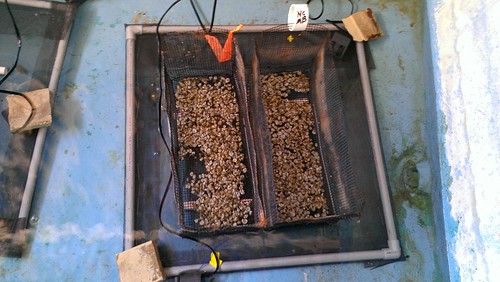 Since the Tile 1.0 experience, we’ve developed more elegant (and much simpler!) methods: we contract with an amazing aquaculturist at a FL hatchery to collect adult oysters from the field, provide just the right ambiance to make them spawn (release eggs and sperm), and then raise the oyster larvae to a perfect size for attaching to our tiles. This year, we added another twist on this theme (Tile 2.0) by collecting adult oysters from different areas in FL, GA, SC, and NC, and then spawning and raising them separately in the same hatchery under identical conditions. We refer to these different groups of oysters as “families”, because all of the spat from a given location are related to one another, but not very closely related to the oysters from a different location (who had different parents). 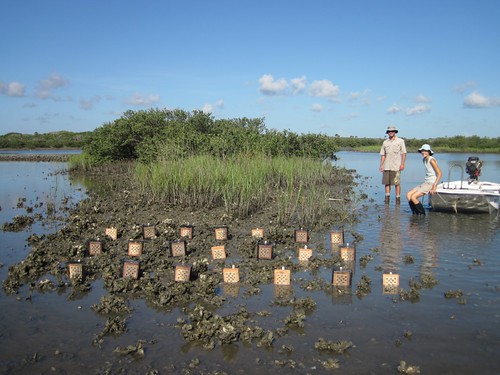 Evan and Tanya admiring our work after we deployed the first reef in St. Augustine.

By putting out tiles from each family at sites across this same geographic range (FL to NC), we can tell if some sites or regions are inherently better than others for oysters (for instance, as I’m currently learning first-hand, there’s a reason that everyone wants to spend the winter in FL!), or if some families are naturally better than others (think Family Feud with oysters), or if the oysters that came from a particular site do best at that site, but not in other places (like the ‘home field advantage’ that recently helped Maryland beat Duke in basketball). Whew – that was pretty mixed bag of metaphors! But you get the idea.

We’re still processing and analyzing the data from Tile 2.0, but it looks like which site is the best depends on what you’re measuring – the best place for survival is not always the best place for growth. And the different oyster families do look and “behave” differently – some grow quickly and some grow slowly, and some survive predators better than others.

Surprisingly, there doesn’t appear to be much of a home field advantage, at least from our initial analyses. And as Meagan pointed out, we’ve learned from other similar experiments for the National Park Service that it’s not just other oysters or predators that these guys have to worry about – it’s barnacles too! But there are still some ‘sweet spots’ out there for oysters, and once we’ve analyzed all of our data, we’ll have a much better sense for where those are.

Music by Barnacled and Pitx.

[…] live oysters and spat tiles (watch a video on the Kimbro/ Hughes lab’s use of spat tiles here).  Through this, they will learn how spat (the next generation of oysters) and adults are […]