Serendipitous results are surely one of the most rewarding parts of experimental research. This past winter, I spent many weeks processing various frozen components of great cage experiment of last summer, including the several hundred spat tiles placed inside the different cages at all sites along the coast. It was while delicately measuring and shucking these little spat that I made one such unanticipated finding: Our oyster spat, unbeknownst to us, had become infested with pea crabs. Pea crabs at various stages of development. The ones in the center are young crabs, as they appear in the stages immediately following infection of an oyster. The ones on the right are older, harder-carapaced crabs (most likely males, which may leave their hosts in search of oysters harboring females). The crab on the left is a mature female. The developing, orange-colored gonads are visible through the female’s thin carapace. Since mature females never leave the their host oyster, their carapaces (shells) are very soft and thin. This makes them very… squishy and pea-like.

You might have had the surprise of finding an oyster pea crab (Zaops ostreus) while shucking an oyster yourself. These small crabs live inside oysters and are a type of kleptoparasite, meaning they steal food from their hosts. An oyster gathers food by filtering water over its gills, trapping edible particles on its gills, and carrying those particles to its mouth using cilia (tiny hairs). Pea crabs sit on the gills and pick out some of the food the oyster traps before the oyster can consume it. By scurrying around inside oysters, pea crabs can also damage the gills mechanically. The pea crabs, like most parasites, don’t kill their hosts, but they can certainly affect the oysters’ overall health. 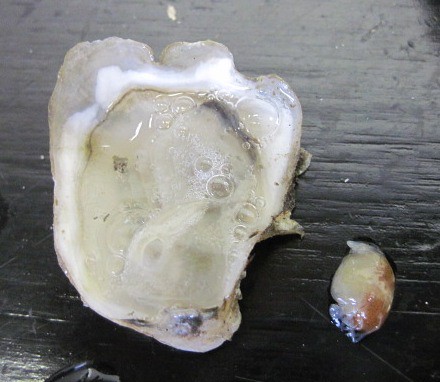 A gravid (egg-bearing) female pea crab next to the oyster spat in which she was living. The female, like most crabs, carries her eggs until they hatch, and then releases her larvae into the water. The baby crabs, when ready, will locate a new oyster host by smell.

As I was processing the oyster spat from all of our experimental sites (Florida to North Carolina) for survivorship, growth, and condition, I began to notice a surprising number of pea crabs living inside them and started to keep track. What’s interesting was not so much that the oysters had pea crabs, but that the percentage of oysters infected with pea crabs varied geographically. For instance, only about 25% had pea crabs in St. Augustine, Florida, whereas over 70% were infected at Skidaway Island, Georgia. Keep in mind that these spat all came from the same source and the same hatchery, so they all had the same starting condition. What’s more, I found that spat in Georgia which had naturally recruited to the tiles from the surrounding waters (of which there were quite a lot, and for which I also processed condition) rarely had pea crabs. Only about 5% of the recruits had pea crabs at Skidaway Island, Georgia. Why is there this huge difference in infection rate? Do the local oysters know something that the transplants don’t? How do these patterns in pea crab infection relate to other geographic patterns we’re finding? How does pea crab infection affect oyster condition? These and many more questions await to be addressed in further analyses and future experiments.

I’ve been pondering the thought of allowing oysters as a pre-filter by allocating them at the bottom of my super intensive raceways for white shrimp. My concern, however, is when the oysters decide to spawn. Could you imagine this spawn/spat being an edible food source for shrimp throughout their life cycle?
My hope is that I can build a small scale intensive runway system that uses natural filters such as oysters, and hydroponic juvenile dwarf coconut trees. However, I’m having a difficult time determining if oysters could be used as a potential filtration and food source for my white shrimp.