Throughout this week, Dr. David Kimbro has been updating us about the premature dismantling of his lab’s summer experiment in preparation for Hurricane Irene.   Before this turn of events, David’s lab tech, Tanya Rogers, had written this account detailing how much work went into assembling the experiment and all of its (literally) moving parts. Beautiful, isn't it? But working on oyster reefs in Jacksonville hasn't been as nice as its sunrises.

For many labs, the summer field season is a period of intensity and madness: a time for tackling far too many projects and cramming as much research as possible into a preciously short window. It’s a demanding flurry of activity occasionally bordering on chaos. The greatest challenge for technicians like myself is to maintain order in this pandemonium of science, and to carry out as much field work as efficiently as possible without going crazy.

Setting up our cage experiments on the Atlantic was certainly our greatest and most difficult endeavor of the summer thus far. David once compared projects like this enormous caging experiment to a tall and precarious tower of cards: if any one component fails, the whole venture will collapse upon itself. It’s safe to say that constructing our tower took considerably more time and effort than originally anticipated, largely in order to stabilize a great number of unexpectedly slipping cards. 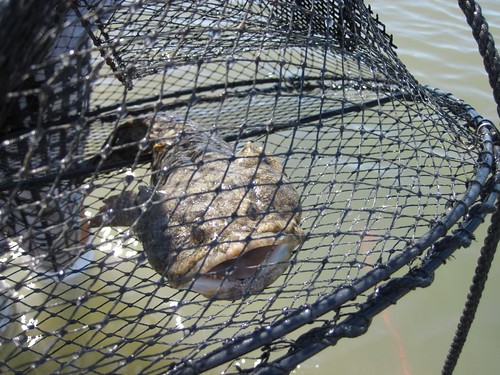 Toadfish are a main predator in the North Carolina reef sites surveyed by Dr. Jon Grabowski's team. This made them an important species to include in the cage experiment at all sites. Unfortunately, they proved more difficult to catch in Florida than in NC, which meant increased an trapping effort and midnight fishing trips at spots recommended by local fishermen.

The weeks spent setting up these cages were in many ways an intense trial of human endurance: an all-consuming, warped reality in which the project was all that existed, and it demanded every ounce of your physical and mental energy. The Whitney Lab interns residing in the dorm next door must have surely thought our crew was insane (and perhaps we were) – working at all hours of the day, fiercely engaged in the most seemingly bizarre lab activities, and swiftly commandeering all unclaimed tank space for our menagerie of oyster reef fauna. Field work required a quantity of manual labor unprecedented in the Kimbro Lab, largely in the form of digging. The problems and delays cropped up with undesirable frequency: activities taking longer than expected, materials not working out, trucks/boats breaking down, cages becoming breached or unburied, difficulties in obtaining predators, and so on. Plans were changing constantly, and our meeting area was littered with failed schedules and antiquated agendas. The loss of our cages in Jacksonville was undoubtedly our greatest blow. It seemed only fitting that our ever-uncooperative Jacksonville site, which has plagued us disproportionately throughout the year with thunderstorms, sandbars, bugs, wind, rain, boat troubles, injuries, and more, would annihilate our cages in its continued attempt to thwart any and all of our efforts to study it. It was with bated enthusiasm that we technicians returned to repeat the entire grueling process over again for a new location. Exhausted, sleep-deprived, and generally destroyed by the completion of both sites, we had nevertheless created an astounding installation of ecological art. 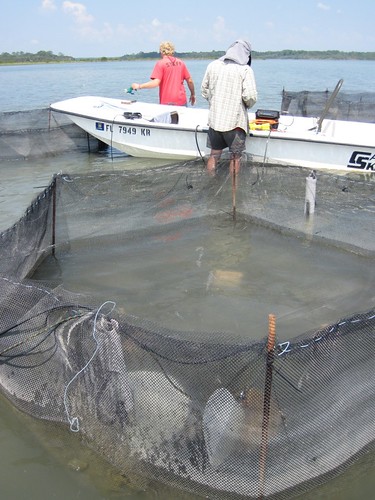 The chaotic summer field work did not end after the cages were set up, or course. Hanna and Evan remained in St. Augustine over the summer in order to maintain the cages, and Hanna to pursue her own project. I returned to FSUCML in order to manage David’s three other oyster projects, with periodic ventures back to the Atlantic. One trip I made to St. Augustine was to assist Dr. Ray Grizzle, a collaborator from the University of New Hampshire, who came to measure the filtration activity of the oysters in our cages using his in-situ fluorometry system. This system enables him to directly measure the quantity of phytoplankton being removed from the water column by oysters, and how that might differ based on the presence of different predators in our treatments. Data (some exciting, some troubling) has trickled in from various components of the caging experiment and we can only hope that the complete breakdown of the cages (to occur in September, and require nearly as much effort as the construction!), will yield interesting and elegant results. As evidenced by the serious boot tan lines I’ve acquired, the traveling and sweltering summer field days continue unabated.

For an explanation of the experiment and all of its parts, click here. 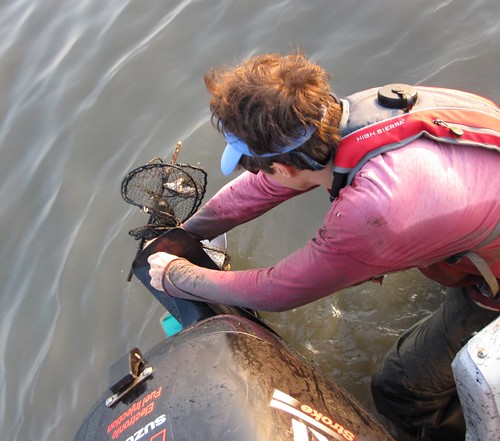 That's one way to retrieve a minnow trap! Dr. Jeb Byers untangles this trap from the propellor of his boat, moments after running it over. 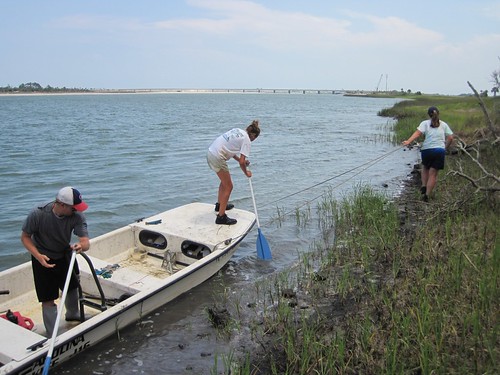 Kelly tows Hanna and Phil after the boat ran out of gas far from the boat ramp. This involves a lot of walking through mud, marsh, and reef.

[…] to methods described in David and Tanya’s posts, the construction of my experiment consisted of (much smaller) trenches dug for cage […]