David Kimbro’s crew has been split into two teams, the Net/Trap team (N/T) and the Tile team (TI). For a closer look at how David’s team nets and traps larger fish and crabs, click here. To learn more about what the Tile team will be doing, click here. And if you click On the Reef under categories in the sidebar, you can track David’s progress over the course of this study. 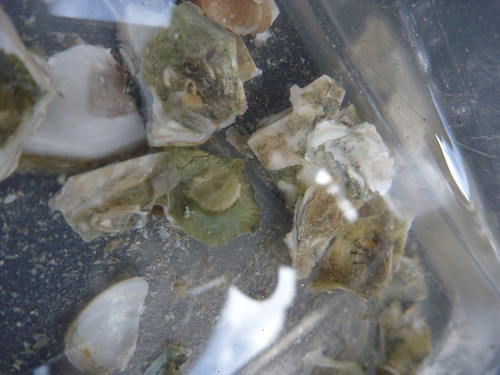 That grey spot (dead center) on the shell is spat. After landing on existing shells, they'll build their own and expand the clump.

When I got to St. Augustine, David was chiseling out shards of shell containing oyster spat (baby oysters) from clumps so that he could glue them onto tiles, as he described in Friday’s post.  I got a good look at what spat actually was.  You can see it in the photo here, basically a small oyster with no shell, seeking out a hard surface (often another oyster’s shell) upon which to settle.  David stayed behind doing that as the rest of his crew, and our crew, piled into the boat for this evening’s activities.

This new experiment- placing tiles with the same number of oyster recruits at all sites on every reef across the study- will give them a more precise picture of how young oysters survive at each site.  It also means a lot of extra work, as the spat that goes on the tiles has to be from the specific location to be entirely accurate- spat is harvested one day, immediately chiseled off and made into tiles and placed on the reef, in the span of about two days.  And this is in addition to the other sampling and trapping.  The previous tile method worked fairly well for the NC and SC/GA teams, but for the sake of being consistent, they’ve also had to adapt this method (while cursing David Kimbro’s name). 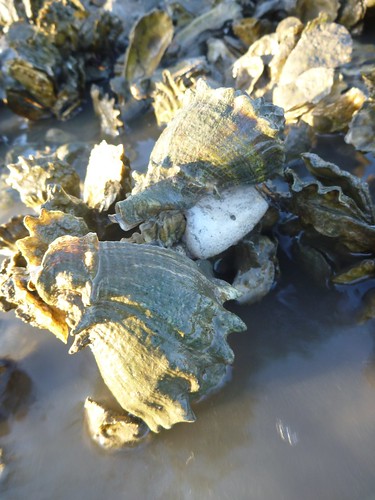 Crown conchs in St. Augustine making a snack of an oyster.

As previously noted on this blog, the reefs did have plenty of crown conchs crawling on them.  David and Tanya have also started noticing Atlantic Oyster Drills, a smaller snail we don’t see in the Gulf.  I’ll look for some tomorrow and get a photo or two up.

8:00 AM– Hanna and Randall (N/T team) retrieved the nets that they set last night in Cedar Key.  This is low tide work, as that’s when it’s best to empty the nets.  They got to their first reef after the vultures did, losing a bit of their catch but still able to identify some species from the fish heads left behind.

1:00 PM– Hanna headed to Saint Augustine and Randall headed home.  As Hanna was gassing up the truck and boat, an elderly gentlemen circled the boat, in awe of David’s creation.  Eventually, he said, “sweet boat.” 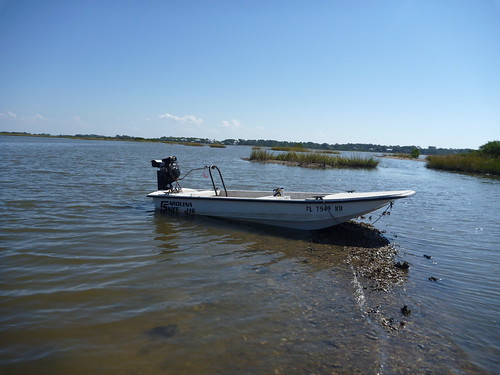 5:00 PM– Deploy nets, take water samples, and reference water level.  The two teams combined activities that would have kept them out past dark, and finished just as the sun was setting.  They then helped David glue spat onto tiles for another hour or so before heading out to dinner. 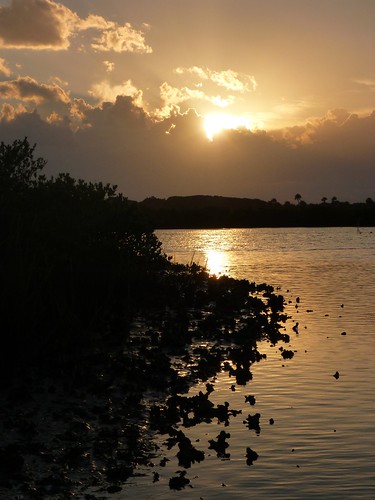 That was the day.  As you see, field work involves a lot of rethinking (as in the tile experiment), thinking on your feet, dealing with circumstances (vultures eating your catch), and coming up with unusual solutions (refitting your boat in a way some might find strange).  It’s pretty late now (as I type this, even though I plan to post this in the morning).  Time to head to bed so that I can get up and shoot that sunrise.

Are you guys working out of UF’s Whitney Lab or with GTMNERR?

We’re at the Whitney Lab, but some of the crew is staying at NERR.