The photo above is my work computer’s desktop picture. Most of the time, when people see it, I find that they had no idea what an oyster reef looked like.  One coworker thought it was a muddy cabbage patch.  To be honest, until I first stepped on one for this project, I wouldn’t have known a reef from a pile of rocks.  And, like a lot of people, I love eating the things- right out of the shell with a little grit and juice.  That’s the disconnect we sometimes have between the food we eat and from where it comes.  So it occurred to me that, while we’ve been talking these last few months about the complex relationships between predators and prey on the reef, it might be helpful to get back to oyster basics.  Over the following weeks, we’ll cover various topics (like why subtidal oysters are harvested more often than intertidal ones like those up there).  We’ll start with what it’s actually like out on a reef, and what you’d see there. 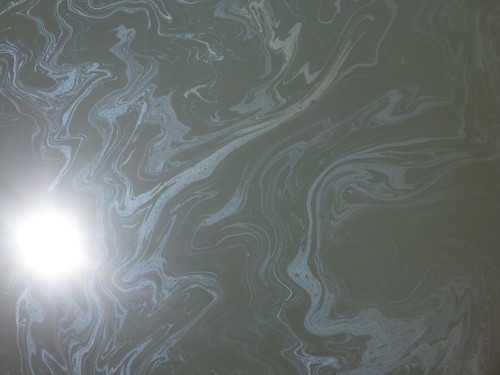 First off, if you’re walking on a reef, that’s because it’s exposed (or near the surface).  The photo above was taken at low tide in Alligator Harbor.  Oysters are typically harvested from subtidal reefs (like in Apalachicola Bay), requiring long tongs to pull up clumps.  Intertidal reefs let you see everything that’s going on, so they can more easily be studied.  They’re all the same species of oyster, the reefs just started growing in different places.

So now you’re walking up to the reef.  The water around you isn’t very clear.  If it was, there wouldn’t be any oysters there.  You can’t see the fish that are swimming around you, though they will occasionally jump.  You’re walking in thick, soft mud.  If you stand still for too long, you’ll find yourself pulling your foot out of it (without pushing down too hard on the other foot and getting it stuck as well).  It’s especially soft around the reef. 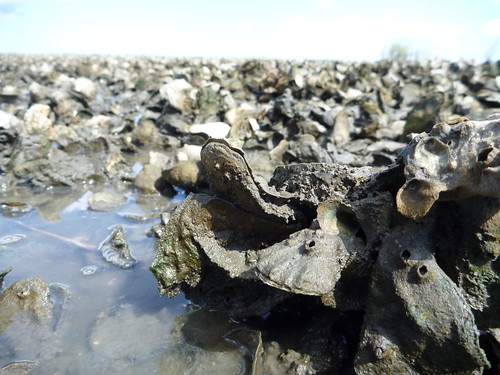 Barnacles grow on a clump of oysters.

Now you’re at the reef.  It’s low tide.  You’re wearing thick soled shoes to protect your feet from the sharp shells, keeping in mind that some clumps might still be submerged and out of site.  Let’s look at the reef.  Oysters build.  They can’t build directly on the mud, so they start these reefs by building on some stones.  Eventually they build on each other, until they’ve created this habitat for themselves.  Unlike our structures, which rise upwards, these clumps sink further into the mud as they grow.  David Kimbro told me that the older reefs are the ones with the deepest roots. 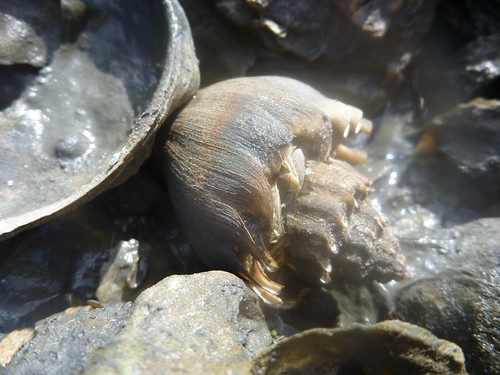 Crown Conch on an oyster reef.

And since these oysters were nice enough to build a reef and stock it with food (themselves), it only makes sense that you’d see a lot of other little critters who decided that this would be a fantastic place to make a home.  You might not see them at first glance.  At low tide, there are obviously no fish on the reef.  You may see a blue crab bobbing around the muddy water at its periphery.  Many of the animals on the reef tend to have shells of a similar color to oyster shells (a nice evolutionary advantage), so you have to look closely.  Stone crabs can be barely distinguishable.  They clear out some of the underneath shells to make burrows where they sit in mud.  Predatory snails like crown conch, oyster drills, and banded tulips are oozing about.  Some of the animals they eat live in the mud.  Lifting some shells up off the reef, you would see little mud crabs and polychaete worms.

So that’s a very quick tour of the oyster reef.  We hope you’ll keep joining us out here on the reef.  We’ll leave you with a few more images from Alligator Harbor: 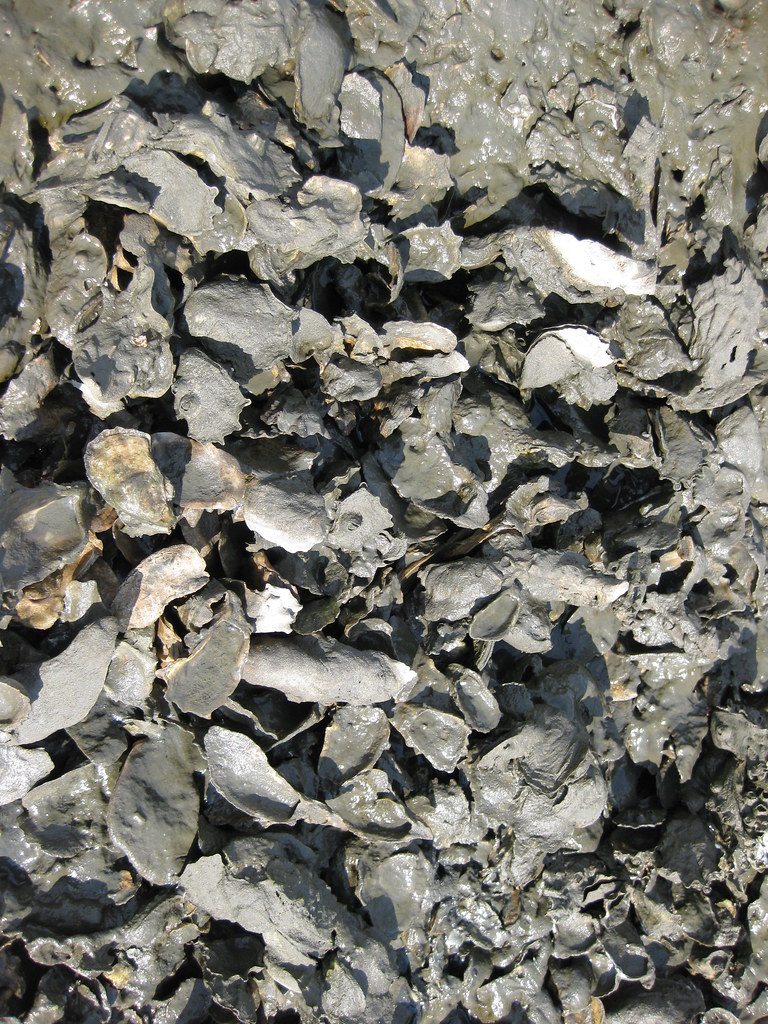