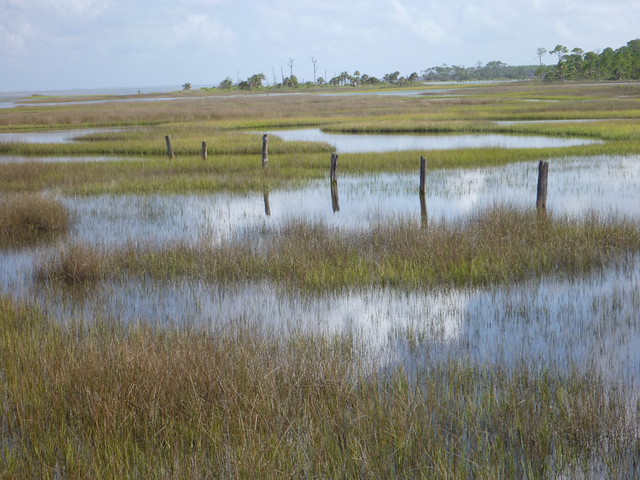 Last week we had a post on what it was like on an oyster reef, the idea being that many people have never really seen one.  Continuing with that theme, I thought it might be interesting to take a closer look into a salt marsh.  This is a trickier proposition because, well, what is a typical salt marsh?  Some of them grow in muddy waters next to oyster reefs, or they can be found along beaches, in wide expanses or in small islands just off the coast.  I’ll keep today’s imaginary journey confined to marshes in St. Joseph Bay, where Randall Hughes conducts her biodiversity study- that is what I am most familiar with.

Unlike with the oyster reef habitat, most of us have seen a salt marsh.  Driving on 98, or kayaking by in St. Joe Bay, you’ll see stretches of tall grass along the water.  From those vantage points, you won’t see a lot of activity.  But it’s worth taking a closer look.  In St. Joe Bay, you can either walk or kayak to dozens of marshes or marsh islands.  Kayaking is faster, but the bay is shallow enough that if you had the time, you could make it to any of these marshes on foot.  High tide is in the morning, making that the best time for kayaking.  However, we’ll be walking today, so we can see more stuff. 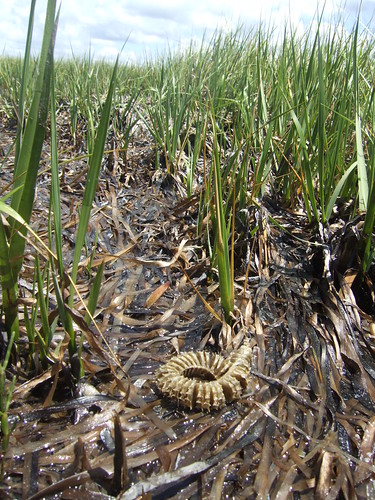 Washed into the marsh along with the seagrass it rests upon is a crown conch egg casing.

The water in St. Joe Bay is typically pretty clear, unlike what you’ll find by the reefs in Alligator Harbor.  You can see everything swimming or crawling around you.  You are doing the “stingray shuffle,” kind of dragging your feet so that if you come upon a ray, you’ll kick its side instead of stepping directly on it.  If you kick it, it will swim off.  They don’t much like it when you step on them.  I find that most rays see me coming before I can get anywhere near them, and swim off.

Most animals will steer clear of an approaching human, though an occasional blue crab will stand its ground and snap a claw at you.  Most blue crabs will swim away fairly quickly, and others will bury themselves if you stop to look at them.  In the summer you’ll see horseshoe crabs coupling, the larger females towing smaller males as they swim by.  And you’ll also pass crown conchs and their egg casings.  Those casings are interesting structures.  A couple of weeks ago I had a production assistant say that he found a water snake.  It was a crown conch egg casing. 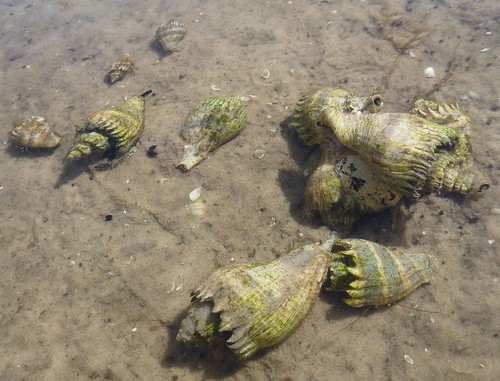 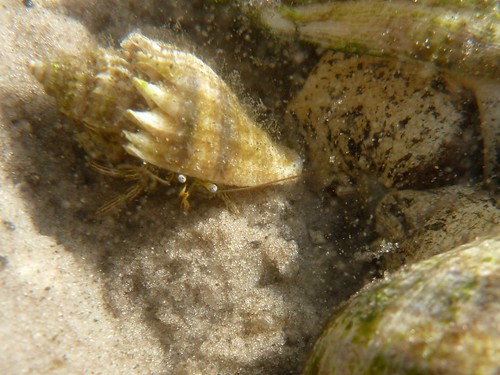 You shuffle past all of that and stand at the edge of the marsh.  Many marshes are surrounded by soft mud, while others (like marsh islands) are sandier and easier to approach.  The edge of the marsh is very interesting to me, as you’ll see a good variety of life moving in and out of it.  Last week we went out and saw hundreds, possibly thousands of small, young crown conchs crawling with surprising speed through the sand by Randall’s “site 2.”  My assistant that day, Tony, spotted a pile of about ten crown conchs on top of each other.  Upon closer inspection, some of the shells contained hermit crabs.  It looked to me that the bigger conchs at the center were feeding on something, and the hermits were hanging out to eat whatever they left.

Swimming out of the submerged grass are all manner of small, nondescript fish.  Amongst them are juvenile mullet and pinfish.  When the mullet reach maturity, they will be used as bait to catch larger fish, or we’ll eat them ourselves.  Females carrying eggs will make local fishermen some good money.  The pinfish will grow and swim out to be eaten by gag grouper. 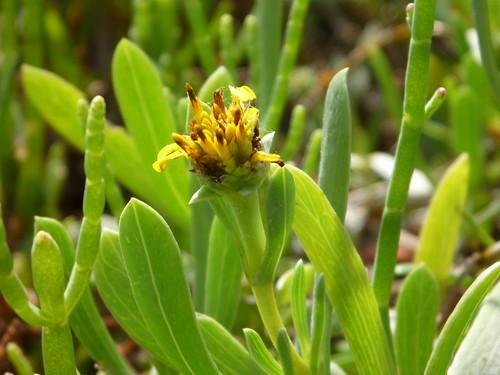 You take a few steps closer to the actual marsh.  You hear a sound like bubble wrap being popped by tiny needles.  Through the blades of grass you see movement; you walk in and see little fiddler crabs running from you.  In some marshes, you’ll see thousands of them scurrying like a moving crustacean carpet.  You walk past some grass, hopefully wearing long pants of some sort.  Cordgrass is sharp, though not as sharp as needlerush.  Needlerush grows further in from the water and is the taller of the two, and no fun to walk through.  Some smaller, kind of cool looking plants also grow here and there amongst the cordgrass.

It’s late summer now, so the turtlegrass growing out in the bay has sloughed off its older blades and grown new ones.  Those blades land on the salt marsh in mats that end up killing cordgrass and making clearings.  Coming up on one of these clearings, fiddlers run into the nearest burrow.  Those burrows are everywhere in the marsh, you just see them better in these clearings.  They dart in and out of their holes to see if the giant is still standing there eyeing them.  Last year’s turtlegrass blades have broken down into muddy muck, and the clearing can be treacherous to walk through.  That muck will provide nutrients which will facilitate new plant growth. 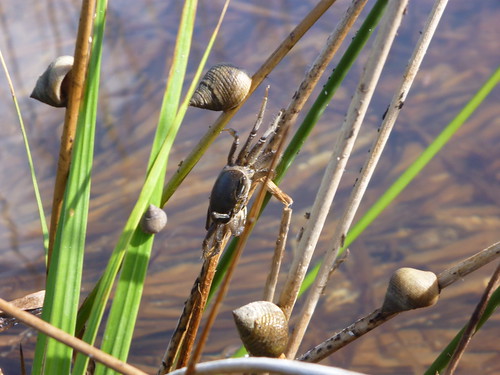 Sometimes in a marsh, every step you take through the grass will trigger several dozen grasshoppers jumping away from you.  Marshes tend to be buggy, though St. Joe Bay typically has a nice breeze that will keep mosquitos and yellow flies off of you.  I tend to get most bitten up getting out of our van, before getting out into the water.

In the grass, periwinkle snails have climbed up the cordgrass to escape conchs and blue crabs.  They and the grasshoppers eat the cordgrass.  The cordgrass gets essential oxygen from the fiddler crab burrows and shelters the fish and larval shrimp.  It doesn’t look like much is happening here when you see it from out your car window.  If you didn’t bother to look down while walking in it, you’d probably not see much of it either.  Since I’ve started this, I’ve really enjoyed poking my face right into it with a camera.  You can focus in on one fiddler out of the thousands and see him do his little fiddler dance, and see his face.  Last week, I stuck a camera in right next to one of the hundreds of crown conchs in the sand and saw its little snail face poking out from under its proboscis.  You start seeing little personalities and little struggles to eat or avoid being eaten.  Sometimes I’m crouched down for a while like this, and then I stand up and see the thousands again.

So this is a little bit about what is going on in a salt marsh.  You really do have to get close to it to appreciate it, and we’ll keep taking you there on this page.  We hope you’re enjoying it.

Here’s a little bonus slideshow. A month ago, I went to Massachusetts for vacation. My wife’s family lives next to this marsh in Duxbury Beach, and I finally made it down into it (now that I do that) to take some photos. The bridge in these photos is Powder Point bridge, one of the longest wooden bridges in the world. You can see how some things are similar between marshes in both locations and others not as much.