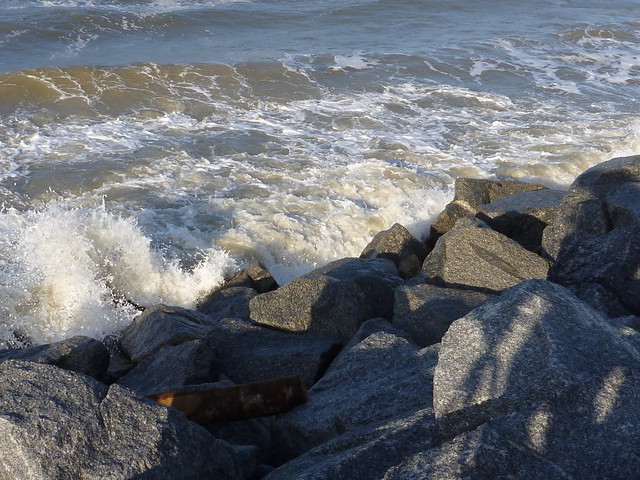 I was driving to Stump Hole with my production assistant Kevin when we saw these waves crashing on the rocks on the beach side of Cape San Blas.  Like any good production people, we knew the only thing to do was to climb the rocks and get footage and stills of the scene.  The same wind pushing the waves at us rocked us a little bit as we balanced- only slightly precariously- on the big stones.  It was a little after 8:30 AM and we had some time to kill before Randall and her team showed up.  And then we would kayak into the bay just across the street.

In early December I made my first winter forays into coastal environments.  Randall has already written about the seasonal shift from Summer to Autumn, where the flora and fauna are reproducing and animals are abundant in the marshes.  Winter is an entirely different beast, as I would see when we got to their sites.  But first, we actually had to get to these sites. 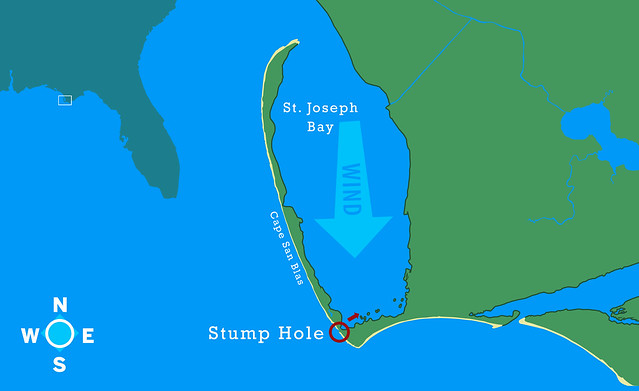 After everyone was there, we kayaked east from Stump Hole with a stiff north wind pushing us on our left.  Rowing to the left was like rowing into a wall, and there were a couple of marshes in our way where we had to get out and lug the kayaks to the other side.  Saltwater splashed into my eyes and onto my glasses.  I kept my squinty eyes forward and we got to a site that for the purposes of this study is known as Island 4.

The research crew went about their normal survey work, with Randall taking a quadrat to several specific spots within the marsh to see how much grass and other species were within its PVC boundary, how tall the grass is and how many Spartina shoots were dead.  Using markers and a GPS, they’ll have data from these precise spots over a span of three years.  Emily and Hanna vacuumed bugs out of the grass and surveyed seagrass wrack.  They will, as always, search for patterns over time, and I suspect the data collected in the winter months will quantify some of what we saw with our own eyes. 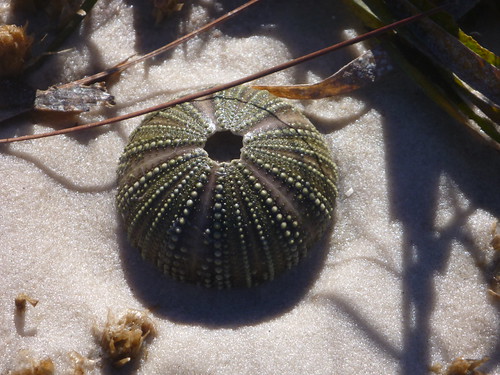 While we didn't see the usual critters swimming and crawling about, some cool stuff washed in from the bay, such as sponges, lightning whelk egg casings, and this sea urchin shell.

Last time I was at this site, some male blue crabs were fighting over a female.  They were so engrossed that I was able to get fairly close without their bolting away.  All manner of predatory snails oozed about, little fish darted in and out of the sparse shoots at the periphery, and a ray laid low in an adjacent seagrass bed.  Today it looked like they had all packed up and left for the season.  And, when it came time to go our next site, so had the water in the bay.

A combination of the tide and the strong wind left the south side of the bay somewhat empty.  Taking a few steps with our kayaks in hand, we decided instead to leave them at the island while we walked our gear over to a mainland marsh known as Wrack 5.

This was another site where I had always seen an abundance of fauna. Hundreds, sometimes thousands of fiddler crabs would scurry away from me into the grass in this one corner of the marsh.  As Randall explained to me, the fiddlers bury themselves in the winter.  Blue crabs swim into the deeper part of the bay, to the north.  Randall didn’t know exactly what happened to the crown conchs, though when digging cordgrass up for an experiment she had come upon a buried conch.  And with their predators all gone, the marsh periwinkles had descended to the bottom of the spartina plants. 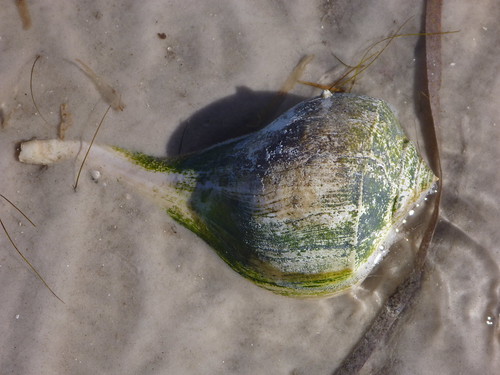 One thing I did see a lot of were lightning whelk shells.  I picked them up and looked inside, wondering, are they more cold tolerant than the other species?  They’re not.  But their shells were pretty.

The following Monday I went to Alligator Harbor with Tanya and Hanna, and it was a lot of the same.  We dragged our kayaks from the ramp to the first site and walked between the islands to the second and third sites.  It was a much muckier walk than in St. Joe Bay (the oysters like it mucky), and I was breaking in a new pair of crappy old sneakers to be my oyster reef shoes.  This is how they fared: 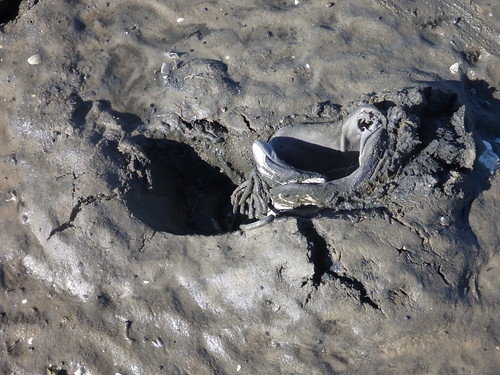 Now that I’ve muddied my hands pulling my shoe out, where’s all that water?

Have any of you trekked out into the cold coastal waters this season? Share your stories!

While I have frequently gone diving as late as December here on Long Island (including this year), it looks like 2011 will be a first for me – diving in NY in January! Just found out that we have to finish bottom surveys that to this point had been continuously postponed due to weather. So it’s up to me and one of the PIs for that project to now get the diving done (since luckily, we both have drysuits). Still, it’s going to be COLD!