The video above is from our dimensions program. It dovetails nicely with what we care about on this site, which is the ecology of Florida’s Forgotten Coast, in this case salt marshes.  The idea is that, when looking to minimize potential oil damage to our coast, you start with its smallest building blocks.  Operation Noah’s Ark, based out of the Gulf Specimen Marine Lab in Panacea, is collecting a lot of little critters that live in places like salt marshes. The fiddler crab helps maintain the marsh with its burrows, which bring oxygen to cordgrass roots.  In that grass, juvenile mullet find shelter, as do blue crabs and juvenile pinfish.  The Kemps-Ridley Sea Turtle eats those blue crabs, and those pinfish will mature and swim out into the gulf to be eaten by gag grouper.  You can see how one species becoming compromised can have a cascading effect throughout the Gulf. 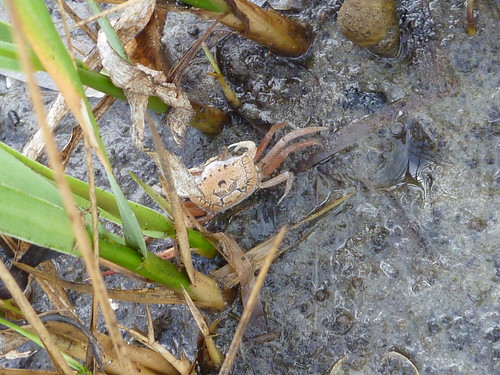 The interconnectedness of the coastal food-web underscores that we need to look at oil effects in the long term.  One population of fish may be healthy today, but if its prey is unhealthy and dies off then it too may die off.  This is a tricky thing to get people to think about.  Within the last couple of weeks, the Deepwater Horizon seep was capped, and the government declared that most of the oil has been broken up.  It feels good to think about this crisis ending, and life on the Gulf returning to some kind of normality.  I’m not saying it won’t.  But there is still a lot of oil in the Gulf, and dispersant, and damage isn’t always quick to present itself.  Riki Ott, a marine biologist who experienced the Exxon Valdez spill, points out that while the worst of the spill was deemed to be over two years later, the ecosystem crashed another two years after that when the Salmon in Prince William Sound died off.  And that of course had dire economic consequences.

In light of recent optimism, this kind of thinking isn’t always popular.  And these kinds of things are unpredictable.  It could be that the long term effects are minimal.  But considering what is at stake, it pays to be vigilant.

Leave comments and questions below:

[…] reef (like David Kimbro in this video) or dragged a net by a salt marsh (like Jack Rudloe does here), you can see where pinfish spend their juvenile years hiding from larger predators. Same for the […]

[…] your turn).  I first went there with Jack Rudloe, who dragged a net in the water and gave us a quick lesson in marsh ecology from the animals he caught (and quickly released).  The WHO festival took place in the St. Marks […]