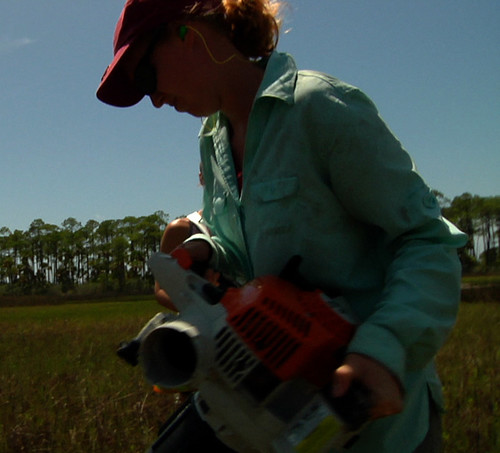 After a summer of relatively problem-free field work, it appears that our luck has run out. Our plan for this week’s post was to discuss our research on seagrass and algal epiphyte interactions, but multiple attempts to get seagrass footage have been delayed due to thunderstorms or otherwise less than ideal conditions. That post will have to wait for later, and now seems an opportune time to discuss the myriad ways that the best laid research plans can go awry.

Science, and field research in particular, takes a lot of planning. We try to minimize potential problems by making detailed protocols and supply lists, and by bringing back-up equipment in the field in case something breaks. However, invariably, things can still go wrong, for a number of reasons:

1. You forget (or lose) something. This is perhaps one of the more frustrating ways that research can be hamstrung, because it is so avoidable. Most research sites require some sort of travel to access, so you can’t just run back to the lab to grab whatever item you forgot. One memorable example was a trip to St. Joe Bay last summer to find sites and select research plots. Everything we needed to do that day was largely contingent on having our GPS unit handy, but of course it was back at the lab (a half hour kayak and hour drive away). It is now one of the items (including a first aid kit, water-proof paper, cable ties, and lots of pencils) that we do not leave the lab without!

2. You break something. Though also frustrating, this problem is often inevitable when using equipment around salt water over extended periods of time. Salt is the enemy to all things electronic, of course, but also to much of our field gear that has some small, critical piece made of metal. We buy corrosion-resistant materials when possible, bring back-up supplies, rinse gear with freshwater after every use, and keep a lot of WD-40 on hand in the lab. Currently, our biggest fear in the field is that the bug vacuum will break, because it is too bulky to have a back-up on hand, and it is very sensitive to salt water. Thank goodness we have great maintenance staff at the lab to help us fix it when it does break!

3. Weather. Afternoon thunderstorms are simply a fact of life when conducting research in Florida in the summer. Last summer I spent lots of time calling family, friends, and marine lab staff – anyone I thought may be sitting near a phone and a computer – to find out what was coming our way on the radar. This summer I splurged (with personal funds) and bought an iPhone so that I can check it myself! We also try to start working as early in the day as possible, though the tide (and sleepy students) don’t always cooperate with that plan. 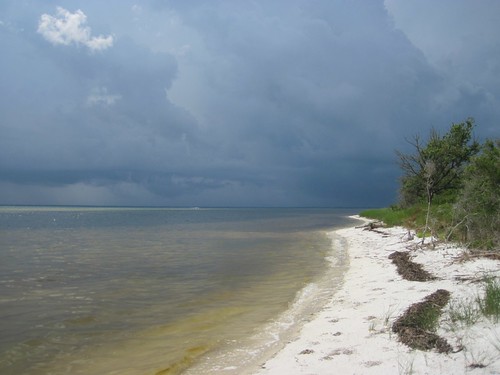 4. Non-demonic intrusion. This term is among my favorites, coined by an ecologist to describe un-planned, chance events that influence the results of an experiment. Included in this category are things like hurricanes, oil spills, and pest outbreaks. If the chance event affects all experimental plots equally, then there is not really a problem, unless it destroys the experiment altogether. Of greater concern is when some chance occurrence influences only a portion of an experiment, causing those plots to differ in an unplanned manner from the other experimental plots. There are ways to design experiments to minimize the potential impacts of non-demonic intrusion: for instance, different experimental treatments are mixed together (“interspersed” in science-speak) so that you don’t have all of one treatment on one side of the experiment and all of another treatment on another side. In addition, it is important to include multiple plots of the same treatment (“replication”), so that in case one or a few plots are lost or damaged, there are others that remain.

Non-demonic intrusion is generally viewed as a bad thing, but some of my more interesting scientific findings have resulted from un-planned events that have influenced my experiments. The best example of this is without a doubt an experiment that I conducted as a graduate student in a seagrass bed in northern California. I designed the experiment to see if plots with one or a few seagrass genotypes differed from plots with many seagrass genotypes. Despite measuring lots of responses (seagrass density and biomass, fish and invertebrate abundance, epiphytic algal biomass, sediment nutrient concentrations), I didn’t find any significant differences in the first 6 months of the experiment. Then, migratory brandt geese arrived that winter in Bodega Bay (ironically, both the site of my experiment and the location where Alfred Hitchcock filmed The Birds): 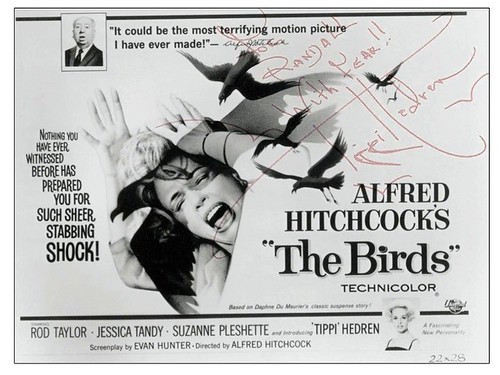 -and, to my surprise, they grazed very heavily on the seagrass in my plots. Although I was despondent after discovering that my previously lush seagrass plots looked like someone had run over them with a lawn mower: 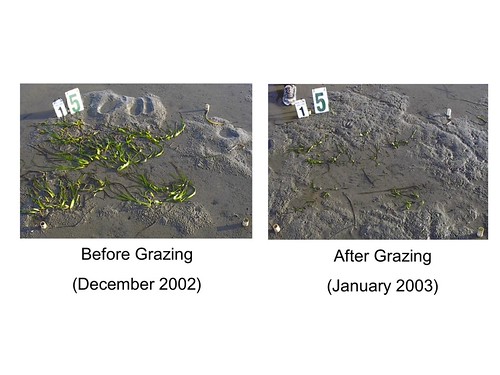 I counted the number of shoots in each plot and dutifully entered and analyzed the data on my computer. Lo and behold, I found my first significant effect of seagrass genotypic diversity – more diverse plots had more shoots following grazing by geese! This unexpected event resulted in my first publication, and thus began a series of field and laboratory experiments further investigating the ecological effects of seagrass genetic diversity. 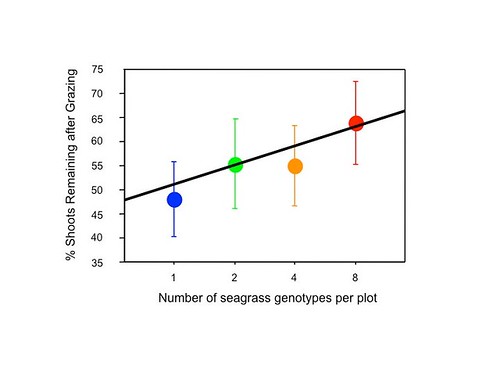 But that’s a story for another day!