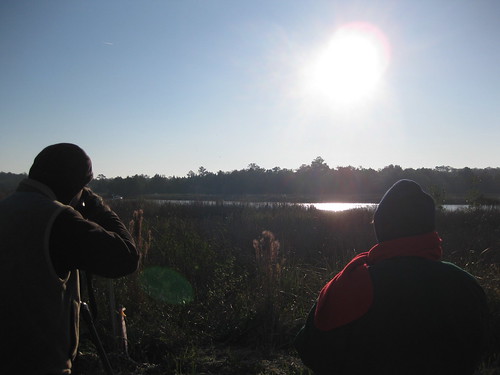 We don’t often discuss birds here, preferring instead to discuss many of the critters they eat along our coasts. But I see the bird prints in the oyster reef mud, and kayak by the pelicans in Saint Joe Bay.  They are as much a part of those habitats as the snails and the crabs.  And every winter, just as sure as you’ll see Ohio and Michigan plates heading south on I-75, you’ll see the flocks that lend the drivers of those cars the nickname us Floridians have for them.

But what happens when the birds forget the way down?  Sometimes, a species numbers get so low that juveniles no longer have the adults who know the way to lead them.  So they need a little help in reestablishing the route.

Possibly the most famous bird of this description brought me to a large field by the St. Marks River almost two years ago.  That was the first year that whooping cranes were flying to a secluded area within the St. Marks Wildlife Refuge, and I was covering the flyover for our dimensions program (it’s that video up there).  It seemed like it took forever for them to get there.  Starting from the cranes’ Wisconsin habitats, Operation Migration pilots in ultralight planes make the journey south in several short hops. For almost a month I received e-mails saying that they could arrive within a week, but unfavorable winds were keeping the birds grounded nearby in Alabama.  Finally, it was announced that they would fly in early on Saturday, January 17.

They expected it to happen between 7 and 8 AM, but advised people to get there early.  I was surprised to see the parking area half full at 6 AM.  It was 18 degrees Fahrenheit outside, and cars kept piling in.  Did I mention it was Saturday?  Over two thousand people made it out for that minute or two when seven birds and three ultralight planes flew several hundred feet over our heads and into their area of the Refuge. 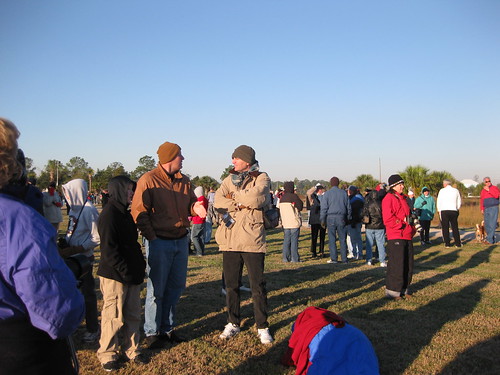 An enthusiastic crowd gathers to watch Wisconsinite tourists travel to their winter digs.

Yesterday, a group of five juveniles was guided in, over a month earlier than in the first year.  From the photos I saw, it was still a nice large crowd.  People love endangered birds, and the whooping crane is an impressive animal.

It’s ironic that a species whose existence as a whole seems so fragile comes in as a top predator in our local salt marsh habitats.  Its favorite food is blue crab, though it is an omnivore that eats other crustaceans, as well as clams, fish, frogs and small reptiles.  As we have seen over the last few months on this blog, they’re at a veritable all-you-can-eat buffet here.  Numbering only five, they aren’t a significant part of the coastal food web.  Yet.  But as long as we have healthy habitat to offer, and the Operation Migration folks keep teaching birds the way, they might become a more regular part of the Forgotten Coast winter.

I really enjoyed the article. I hope their numbers can grow.