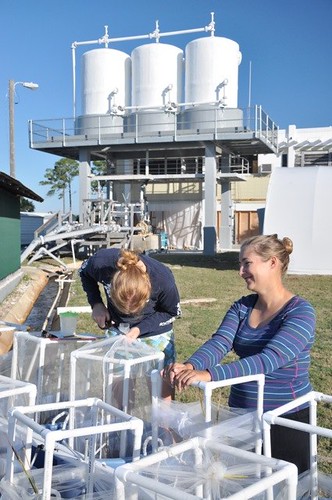 Emily and Robyn setting up yet another tank experiment that I've dreamed up. (Thanks to Nancy Smith for the pic!)

Because of the big focus on oysters over the last month, it may seem as if we haven’t been doing anything “In the grass”. We’ve been busy, though, trying to squeeze in a few additional surveys and experiments in November before it gets cold enough that the animals stop eating (or eating very much, I should say) and the plants stop growing. For a while there, I was coming up with so many end of season ideas that I’m pretty sure my crew hated to see me coming!  We just did finish up before the winter weather arrived (early) in December. (More on what it’s like working in this cold weather in future posts.)

We actually missed the opportunity to do one of our planned studies involving grasshoppers – there was a cold snap two nights before we went in the field to get the hoppers, and they were nowhere to be found.   Those data will have to wait until next spring when the grasshoppers turn up again!

We’ve had better luck with two other projects –

1. Do snails prefer to climb on cordgrass reproductive stems? 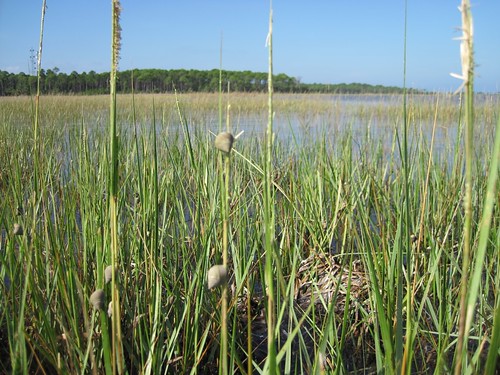 Snails climbing on cordgrass reproductive stems in the field. 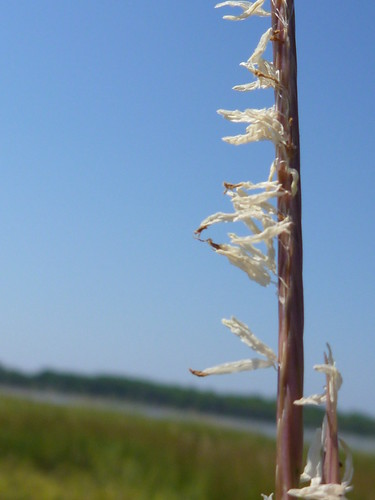 A tasty snack for a periwinkle snail?

I’ve mentioned before on the blog that we noticed lots of snails climbing on cordgrass reproductive stems this fall. In collaboration with David and his team, we visited marsh sites along the Panhandle to see if our observations would be supported with rigorously collected data. So far, so good! 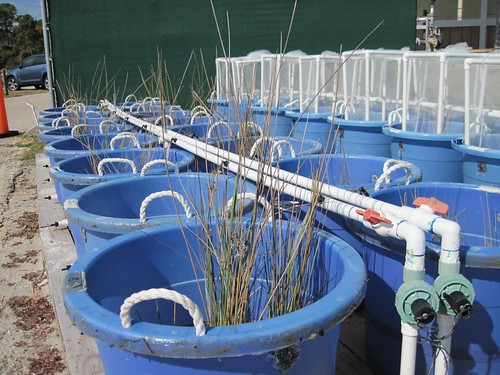 The trusty tank set-up at FSUCML.

We also started a series of experiments in our trusty tanks at the FSU marine lab to tease apart why snails may have this preference: Do the snails simply like that the reproductive stems are taller than regular stems? Or do the reproductive stems “taste” better because of greater nutrient content? Does it matter if predators are present or not? The preliminary results suggest that they like the reproductive stems, regardless of whether they are taller or not. In January, we’ll head into the lab to do the tests for nutrient content that should help us to tease apart why that may be.

2. Does needlerush provide a better predation refuge than cordgrass? 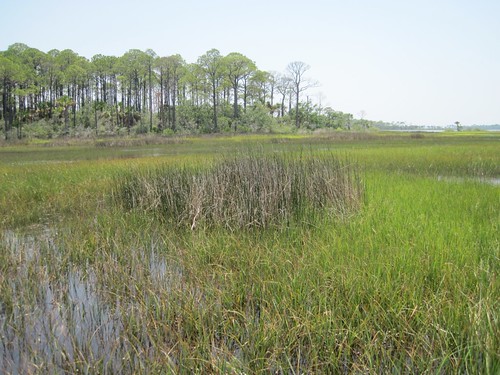 Last fall I did a tank experiment to look at whether snails prefer to climb on another marsh plant species, needlerush (Juncus roemerianus), and whether this preference increased snail survival when predators were around. The results were interesting, but as usual, the first round of the experiment created additional questions that required more work. In November we started a similar experiment, again in the tanks at the marine lab, looking at snail climbing behavior on needlerush and cordgrass in the presence and absence of the snail’s nemesis, the blue crab. 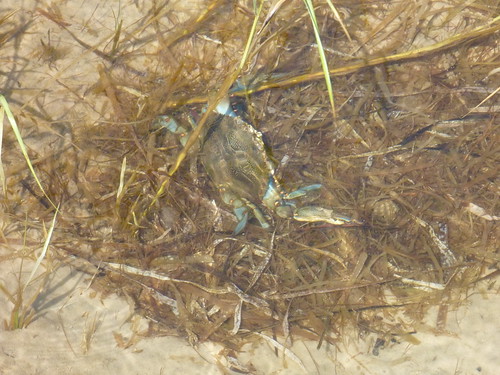 It’s a bit ironic that each of the experiments we recently finished converged on a similar idea – snails appear to prefer to climb on taller plants. Considering that the taller the plant, the farther they can climb away from predators in the water, it makes sense. The true question is to figure out whether and why it matters that the snails do this. If they climb on reproductive stems, are fewer cordgrass seeds produced? What will that mean for next year’s crop of cordgrass? Also, if snails spend a lot of time hanging out on needlerush to avoid predators, does that mean they don’t eat as much cordgrass? Knowing things as seemingly arcane as which plant a snail prefers to climb on can help us predict and manage the overall abundance and productivity of cordgrass, and the salt marsh in general. And of course, the field work and experiments are fun! Especially when you get to wrestle with blue crabs…

Here are some photos of periwinkle snails in Randall’s latest tank experiments: