“Oh, knowledge exploring is oh so lyrical, when you think thoughts that are empirical.” 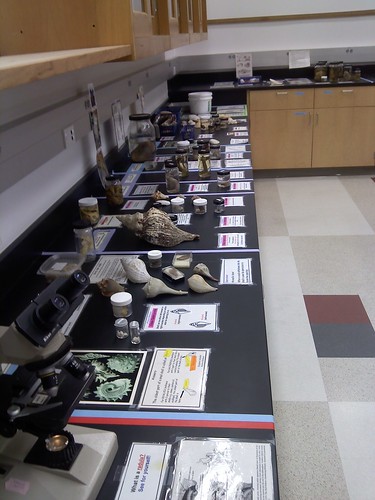 The lab bench set up with all of the molluscan specimens for the students to study this week.

These lyrics are from Mr. Ray’s teaching song in Finding Nemo. It’s too bad that I can’t sing all of my lessons!

I’m teaching Animal Diversity lab to undergrads on campus this semester.  This is a “survey” course, meaning that we go over the major phyla in the animal kingdom, learning one to three phyla each week.  The students get to look at preserved specimens and do their own dissections.  It’s so rewarding to hear a “that is so cool” reaction to whatever a student is looking at.

A few weeks ago, the students designed their own small experiments using planarians (small flatworms, see photo below).  It was great to see them think creatively and analytically in formulating their question and experimental design.  As with any set of experiments, some worked and some didn’t.  The strangest results we got were with two separate regeneration experiments: two different groups each cut a planarian in half, and somehow ended up with three planarians a week later! Spontaneous generation, anyone?  (What probably happened was either that the dish wasn’t sealed well and another planarian moved over from another experiment, or that the students accidentally made two cuts instead of one.  But it was still pretty surprising!) 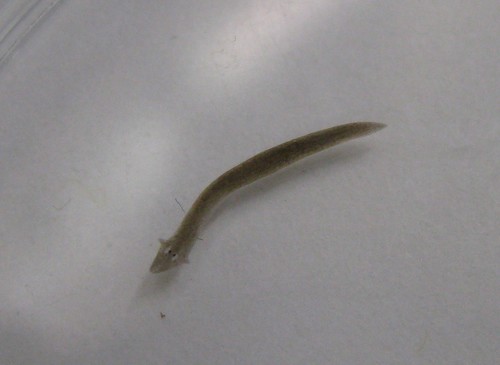 One of the planarians used in Animal Diversity lab. Isn't it cute?

One of the most direct benefits of teaching for me is that learning about biology in the classroom motivates students to learn more through field research.  The past two months I’ve been fortunate enough to have many eager undergraduates volunteer to help with my field surveys.  Thanks to the awesome waders Randall bought for the lab, we all managed to stay warm through the cold weather.  I’m very glad the weather is improving though.  This past weekend getting sunburned was more of a concern than staying warm!  I think the undergrads appreciate the change in weather even more than I do, since for some reason most of them are from south Florida.  In January, one of the students said he could tell I was from Maine when I zipped the fleece liner into the windproof shell of my field jacket.  I never knew you could identify where someone was from by their outerwear!  While admittedly surveying the first site with a group of new helpers takes a long time as they learn how to identify species, use the sweep nets, etc., it is great how quickly they pick it up.  On Sunday, two new helpers (Austin and Chris) and I surveyed four sites (compared to our usual maximum of 3 per day), and we were done before 5pm!  It wasn’t very long ago that I was an eager undergrad helping a grad student with her research, so I’ve been on both sides of the table.  I think it’s a great example of mutualism: grad students need help to realize their lofty research objectives, and undergrads need research experience.  At least I hope that they’re getting useful experience out of it!  I know I’m indebted to them for their help. 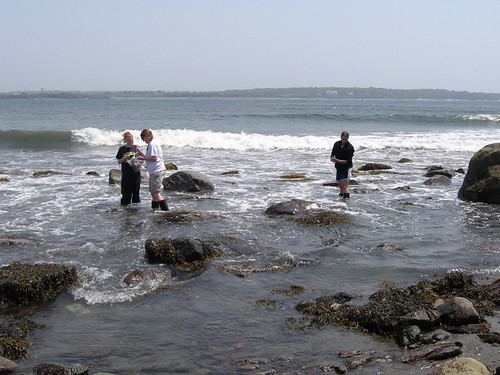 My favorite part of teaching (in the field or in a classroom) is when students ask a bunch of questions.  That way I know they’re not bored!  This is particularly gratifying in the classroom.  I teach on Fridays, and at the beginning of the semester I was worried that I was going to end up with students who were unwillingly stuck with a Friday lab and would therefore be uninterested and lethargic.  But my students are great!  Sometimes they ask questions that really show they’re thinking critically and making connections.  I doubt they realize how clever their questions are, but they definitely make me think! 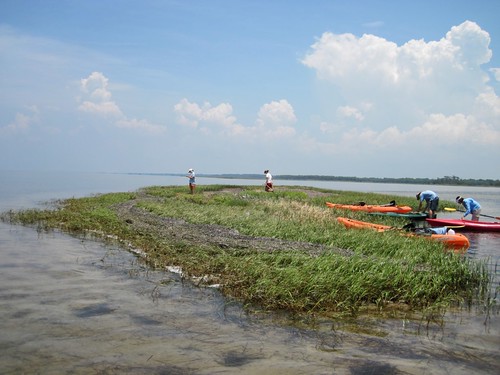 At one of Randall's genetic diversity sites the first summer I worked for her.

Of course, there are frustrating parts of teaching.  In the classroom, you have to worry about how to prevent cheating, there are students whose main goal is to get out of lab as fast as possible and do the minimal amount of work required, and sometimes you’re not sure if you’re getting through to the students at all.  In the field, whether or not students understand your instructions has major implications on the reliability of the data they collect.  In both cases, it falls to you as the teacher to make sure your students are actively involved and fully comprehend both the instructions and the theory behind what you’re studying.  And the current climate for teachers isn’t particularly sunny in the states.  Rather depressingly grey, really.  But I still think getting one excited reaction or clever question makes dealing with the frustrations worth it.  I bet many teachers would agree with me.  So thanks to all of the teachers out there who work so hard and don’t get acknowledged often enough!

Emily is a graduate student in the Hughes Lab at the FSU Coastal & Marine Laboratory. She is studying the effects of seagrass wrack that washes into salt marshes