Update March 9, 2014 – We’d like to thank everyone who came out for one or more of our events on Saturday. It was a pleasure to meet all of you (photos will be posted soon).  If you missed the premiere, Oyster Doctors will air on WFSU-TV on Wednesday March 19, 8 pm/ 7 ct.  Look for it online shortly after. Almost four years ago, WFSU began the coastal adventure that is In the Grass, On the Reef.  Now, we want you to join the adventure.  And not through the magic of video- we want you physically there with us (but yeah, we’ll still make a video).

On Saturday, March 8, at the Ft. Coombs Armory in Apalachicola, Florida, we’ll be premiering In the Grass, On the Reef: Oyster Doctors.  It’s the culmination of these almost four years of losing my shoes in oyster reef and salt marsh mud, of kayaking to field sites in rain, waves, wind, and in those winter tides where the water all but disappears.  It’s that visceral experience, as much as the research and ecology, that we’ve tried to make a part of our videos and blog posts.  Seeing and feeling that magical place where the land meets the sea underlines the need to better understand it. 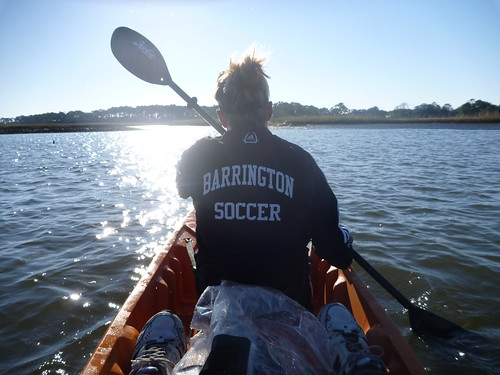 Hanna kayaks towards oyster reef experiment sites in October of 2010.

In that spirit, we’ll be having a few EcoAdventures where you, our viewers and readers, can join in the fun and get up close and personal with the wild places of our coasts.  There are three opportunities, one in each county of Florida’s Forgotten Coast and in each of its major coastal features.  These are free events, but some have limited spots available.  So register early to be a part of a lottery for these trips (winners will be selected on February 28).

A kayak tour of the animal rich marshes and oyster reefs of the Wakulla Beach unit of the St. Marks National Wildlife Refuge.  A walk through the St. Joseph Bay State Buffer Preserve to see the south Florida plant that’s more frequently popping up in north Florida marshes.  And a boat ride connecting the Apalachicola River and its bay, and those troubled oysters that are iconic of the Forgotten Coast.

With these trips, we recreate the IGOR journey in miniature.  Dr. Randall Hughes, our collaborator and one of the “oyster doctors” of our new documentary, will lead us through these first two trips.  In Wakulla Beach, she’ll be joined by Dr. William “Doc” Herrnkind, a retired FSU Coastal & Marine Lab professor and a guru when it comes to the critters that we have followed in this project.  This will be my first time meeting him, though I have heard quite a lot about him over the years from our research collaborators and even members of the community.  When the BBC wanted horse conch footage in our area, this is who they called. 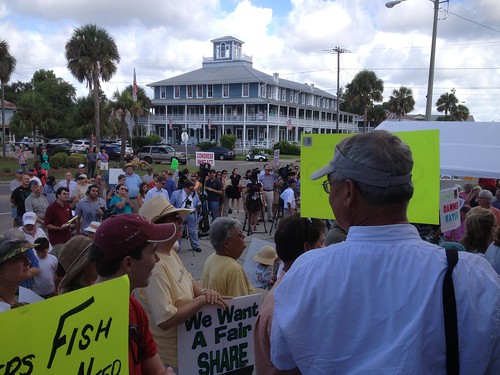 Media and community members gather in front of the Franklin County Courthouse in Apalachicola. With Florida’s U.S. Senate delegation in town, residents sent a clear message: Apalachicola oysters deserve their fair share of water from the Apalachicola/ Chattahoochee/ Flint basin.

For our Apalachicola boat trip, we’ll be led by Apalachicola Riverkeeper‘s Dan Tonsmeire.  I could not be more pleased to have Riverkeeper involved in this event.  Participating in their RiverTrek adventures over the last two years, in addition to being a life changing experience, has added immeasurably to our coverage of the Apalachicola oyster fishery crash.  Of course, when I signed on to paddle in early 2012, I had no idea that Florida’s largest oyster fishery was so close to disaster.  Likewise, when we first applied for the National Science Foundation grant that funds this project, we wrote in a possible Apalachicola premiere not knowing that its oysters would become a large part of our story.

Since we embarked on this journey, Dr. Randall Hughes, Dr. David Kimbro and their crews have let us be there for the twists and turns, failures and successes, and ultimately the discovery that has taken their research in a fascinating new direction.  While pursuing this new direction into animal behavior and it effects on these productive ecosystems, they were also investigating oyster reef failures in drought stricken areas.  On the one hand, they have relentlessly pursued this idea that animal behavior, the menace of a predator, can influence the health of marshes, oyster reefs, and seagrass beds.  On the other hand, does any of that matter if nature one day turns its back on these coastal habitats and cuts off the water?  It’s a question we ask as we delve into this spectacular world.  We’d love for you to join us in Apalachicola for the premiere, and join us on the water (and, I won’t lie, in the muck) as we go In the Grass, and On the Reef, one more time.

Register to attend the premiere of In the Grass, On the Reef: Oyster Doctors and to participate in pre-screening EcoAdventures! 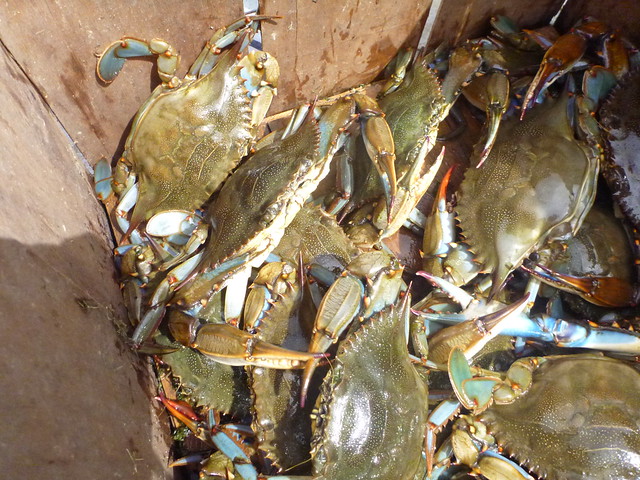 Blue crabs are a commercially important species that rely on both salt marsh and oyster reef ecosystems. They are also important predators in these habitats, preying on marsh grass grazing periwinkle snails and oyster eating mud crabs.