Although we’ve busied ourselves this summer by selecting research sites and practicing various aspects of our sampling program, we have still not collected any ‘real’ data concerning the objectives of our biogeographic oyster project.  Well, this post will be short because as I write this we are hectically preparing to begin said research.  Coincidentally, tropical storm Bonnie has also decided to begin her work in the Gulf at the same time! 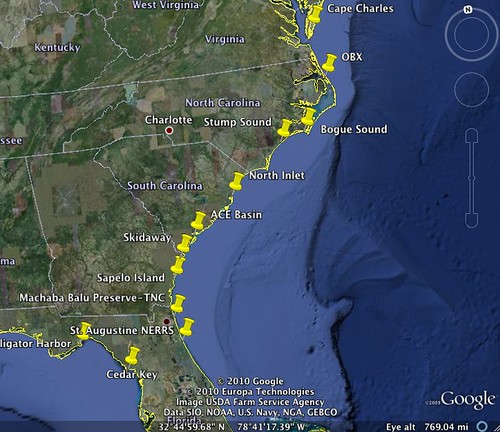 Despite Bonnie, it’s pretty exciting that over the next week three different research teams will be on oyster reefs encompassing 1,000 miles of shoreline (see map) and will perform the exact same research.  If executed well, this coordinated sampling will allow us to compare how predator assemblages on oyster reefs differ from north to south.

To make sure things run as smoothly as possible, we’ve had multiple conference calls over the past two weeks to verify that everyone is on the same page and to trouble shoot problems that we failed to consider during initial planning of the project.

From the results of much horse trading, we now have the following schedule:

(1) Deploy gill nets during an evening at low tide; this gear targets larger fish and we assume fish use reefs more during the evening.

(2) After processing gill net data during the following low tide, we’ll then deploy three kinds of traps (2 replicates each = 6 traps) to each reef to ‘passively’ sample relative abundance of smaller fishes and invertebrates that utilize the reef habitat.  These traps will ‘fish’ for six hours (three hours after low tide until three hours after high tide) and will integrate fish usage of reefs across the portion of tide that fish are present on reefs.

(3) After processing the trap data, we’ll then rinse gear, load it onto a truck, grab a cup of coffee, and quickly (but safely) drive to our next study site to repeat the process.  Having to coordinate our sampling around the tidal schedule of multiple estuaries makes this sampling feel somewhat like a relay race.  But if all goes well, by next Friday, my team as well as the other two involved in this study will have collected these data in 12 different estuaries!

I’m looking forward to telling you how it all unfolded in my next post.

WFSU’s kayak was provided by Wilderness Way.  The music in this piece was performed by Ric Edmiston.

I have a home near the end of Alligator Point (bay side) and will be following this blog with interest, I’ve watched the changes to the bay for 50+ years. There is a small oyster bed in front of the house and your welcome to park in my driveway if needed to do your studies.

[…] Tile team (TI).  For a closer look at how David’s team nets and traps larger fish and crabs, click here.  To learn more about what the Tile team will be doing, click here.  And if you click On the Reef […]

[…] Tile team (TI). For a closer look at how David’s team nets and traps larger fish and crabs, click here. To learn more about what the Tile team will be doing, click here. And if you click On the Reef […]

[…] Tile team (TI). For a closer look at how David’s team nets and traps larger fish and crabs, click here. To learn more about what the Tile team will be doing, click here. And if you click On the Reef […]