After all the time we’ve spent on oyster reefs, we thought it would be interesting to take a look at what the little guys mean to us culturally.  The video above is from Our Town, Apalachicola and features the famed oystermen of that town.  The article below is a little more personal.

We had just finished interviewing John Spohrer for a photography feature and, well, we were in Apalachicola.  So I decided to conduct what our oyster researcher Dr. David Kimbro would call an exercise in predator-prey relationships.  My prey was some of Apalachicola’s finest product, and it wasn’t even an R month.  Me and my wife Amy (who is also my production co-conspirator) decided to try a place with a decent-sized crowd of friendly locals out front, the Hole in the Wall.  Amy did not eat any oysters and this was her last shoot with me for this project.  More on that later.

People in Apalachicola are proud of their product.  The man shucking the oysters behind the bar would excitedly declare “Oh, that’s a good one” as he picked them out of the ice.  The perpetually smiling waitress who brought them to the table would come by every once in a while and ask “How do you like your oysters?”

“Enjoy them while you can…” 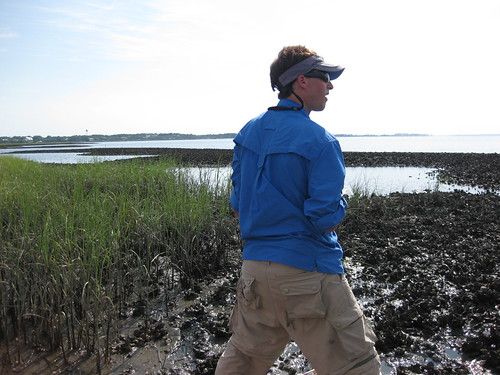 I did enjoy them, as I have for years.  People in these parts have for quite a while.  Longer than you may realize.  At nearby St. Vincent Island, ancient oyster shells and pottery shards lie in piles called middens, evidence of a long disappeared people.  The shells have been dated at 4,000 years old or older.  This means that people have been enjoying these oysters for thousands of years.  It’s an impressive legacy, especially when you consider how some of our country’s other historical oyster producing areas have fared over time.  The Chesapeake Bay used to be difficult to navigate it was so cluttered with reefs.  New York City used to be renowned for the oysters harvested there, they were a staple of the Big Apple until just under a century ago.  But while those habitats have been decimated, Gulf oyster reefs retain their abundance and quality.  When we accompanied David Kimbro on the first day of his study in Alligator Harbor, the scientist who had been studying reefs in North Carolina and California marveled at the size of the reefs.  He’d never seen so many.

I fell like I was rubbing it in Amy’s face eating those oysters, even if she had been looking forward to enjoying the local seafood as much as I was.  We had done the research and shrimp were an acceptable food, rich in Omega 3 fatty acids important to brain development in embryos.  This was her last shoot, as the days were growing hotter and we spend some long days on marshes and reefs.  Our child will be born a Floridian, like I was.  I’ve been spoiled by great beaches, a steady supply of fresh seafood, wetlands bursting with animal and plant life.  I wonder in what kind of Florida my child will grow up.  Will he or she have at their disposal what Floridians have had over the last few thousand years?  No one can really say.  Even if the worst happens, there is hope that we can restore it, even if it could never be exactly the same.  In the meantime, I’ll just do what I was told.  I’ll enjoy it while I can.

We want to hear from you.  Leave your comments and questions below: