When I heard it was supposed to rain on Saturday, I was a little bummed. I was planning on taking the family to the FSU Coastal and Marine Lab Open House followed by the FSU Spring Game (where my 12-week old son could attend his first football game featuring my two favorite teams).  Luckily, the storms rolled through early in the morning and made for a nice day at the coast. 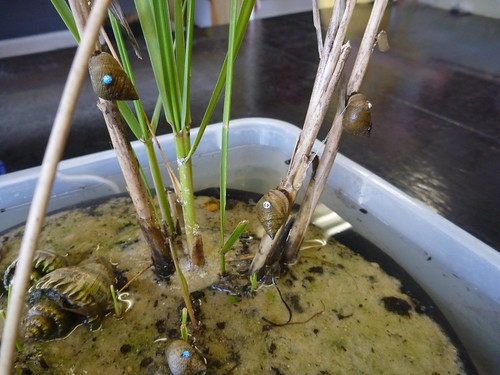 I started off by visiting my friends at the Randall Hughes and David Kimbro labs.  Robyn and Emily held down the fort in the Hughes lab, where kids watched a very peculiar sport.  As Randall’s previous post promised, there were indeed periwinkle snail races.  As you can see from the photo at the right here, the snails were color coded (white and blue) and numbered so that they could be told apart.  Some crown conchs (periwinkle predators) were placed into the tubs to give the smaller snails some incentive to climb.  The fastest climbers won.  Let’s watch part of one race:

I showed that thirty-five second clip to my wife, who swore that the snail did not move.  So I sped it up a bit: 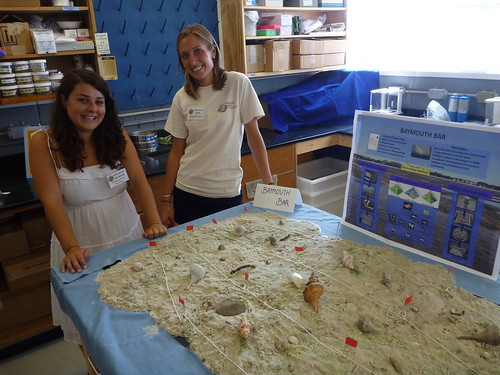 Cristina and Hanna pose by their display.

Next door in the Kimbro lab, Cristina had set up a display of all of the predatory snails of Bay Mouth Bar.  When my son woke up and started taking things in, he took an immediate interest in the large snails in this display as well as the conchs and whelks crawling around in the Hughes lab.  In that he takes after me; I love the big snails.  Cristina had devised a game where kids would spin a wheel, the arrow pointing at the name of a snail.  The kids would then select the snail they thought corresponded with the name.

Under the lab building, Saturday at the Sea had their touch tanks set up.  One of my favorite critters down there was a fish that the Kimbro crew has caught on some of their oyster reefs, and which Tanya has stated in a previous post is one of her favorites as well.  I’m talking about the striped burrfish.  This one is a little larger than the one pictured in that post:

They had a lot of cool critters.  SATS brings school kids out into coastal ecosystems in an effort to educate in a more hands-on way.  They work in conjunction with Sea to See, which brings critters into the classroom.  We have something cooking with C2C, keep an eye out for some new videos featuring the various coastal habitats of our area.  I’m excited to use footage of animals we’ve shot in salt marshes that weren’t integral to Randall’s posts so far (so I haven’t had good reason to use it), and to explore systems such as seagrass beds, which we have only briefly visited.  We hope to have that for you within the next month or two.

There were of course many other displays by other Professors at the Lab, and by different groups in the community like Riverkeeper, the Alligator Harbor Turtle Patrol, and the Gulf Specimen Marine Lab (look for Cypress Rudloe on WFSU-TV’s dimensions to talk about the upcoming Sharks and Chablis benefit- April 27 at 7:30 PM/ET on WFSU).  You can see a broader view of the event in the following slideshow, starting with some of the preparations made the previous day:

I loved the ability to have an armchair experience of the Open House. Great community building activity. It’s a win-win situation for those who learn and those who share. Your website is developing into an marine biology course. Thanks!