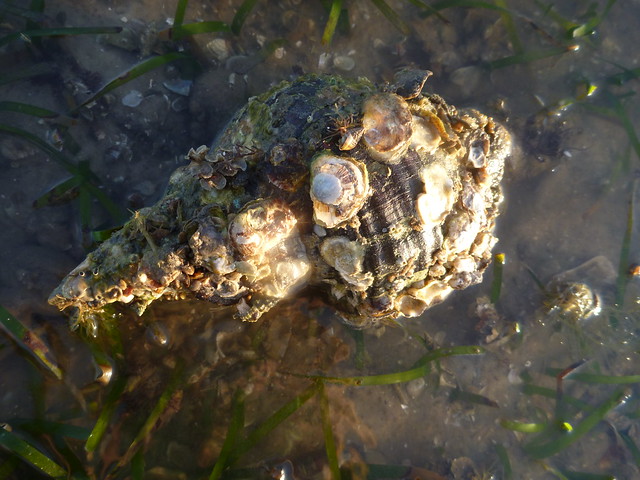 It kind of looks like one of those vintage ’80’s jackets adorned with mirrors and sequins- mollusk style.  This horse conch’s got a little bit of everything on it, the result of an interesting reversal of roles in this seagrass bed on Bay Mouth Bar.

In this ecosystem, a horse conch is the top predator.  This football sized snail eats a lot of the other large predatory snails, of which Bay Mouth Bar has plenty, from tulip snails to whelks to moon snails to the kind of strange white baby ear.  Some of those, especially the lightning whelk, get pretty large, but not as large as a horse conch can get.  The landscape reigned over by these snails is diverse as well, featuring brittle stars, sand dollars, sea squirts, spider and hermit crabs, polychaete worms, and a large variety of bivalves.

This horse conch took on a lot of that diversity right on its shell, it’s top dog of the habitat as well as practically being a habitat itself. 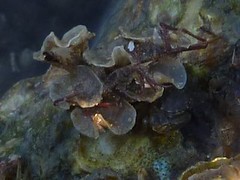 So what are some of the critters taking up residence on this horse conch?  You may notice structures, like this one, that look like plants.  These are bryozoans, also known as moss animals.  Bryozoans are colonial animals, consisting of individuals called zooids.  They are covered with cilia that filter their food from the water. 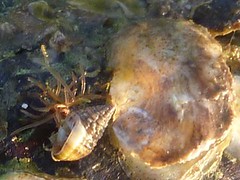 In the photo to the right, you can see another kind of bryozoan (the tentacles on the left), and a hermit crab in snail shell.  On the right side of the photo is a familiar sight to readers of this blog- an oyster.  We’re used to seeing oysters in clumps and reefs, as they like to build on each other to make their own habitat.  But how does an oyster reef start out?  Oysters don’t build in mud, so reefs start out when oysters build on rocks or other hard surfaces.  This large snail isn’t likely to turn the seagrass bed its in into an oyster reef, but it is interesting to see young oysters building on a new surface. 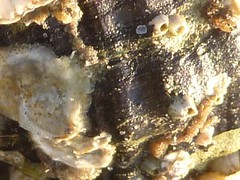 And in this photo, in addition to an oyster spat, are barnacles (the roundish objects towards the right).  All of our boaters out there know these little crustaceans, who like oysters and some other bivalves build on hard surfaces (like the hull of a boat).

Once I sort through all of the photos and videos from Sunday’s trip to Bay Mouth Bar, I’ll be adding some to the Bay Mouth Bar species page.  As you can see from the variety of life just on this dead snail, it’s got a lot going on.  I look forward to going back!

4-23-11: CORRECTION- the snail shell the hermit crab is in was initially listed as crepidula.  This has been fixed.