David and Randall’s NSF funded oyster study looks to understand how predators control oyster eating animals such as mud crabs and crown conchs. But this dynamic isn’t exclusive to oyster reefs. They are also investigating how predators might help maintain salt marshes and seagrass beds. In their seagrass bed studies, they have focused on a system loaded with predators: Bay Mouth Bar. 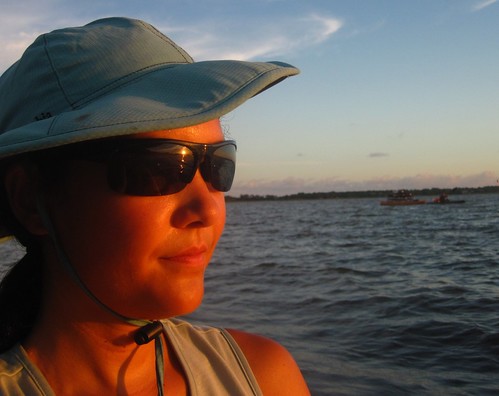 The very first time I drove from Tallahassee to the FSU Coastal & Marine Lab I saw a black bear crossing the Crawfordville highway. No joke. This was in June of 2010, and I had just driven 5 days and 2800 miles from San Francisco to the Florida panhandle to take up my new job on the Gulf Coast. I had just finished college in Washington state, and I had never before been to the Southeast. What sort of wild place had I ended up in?

A very wild and unique one it turns out, and one I’ve come to know better working for the past few years as a research technician for Dr. David Kimbro in the fascinating coastal habitats of this region. Primarily I’ve been traipsing around oysters reefs across the state for the collaborative biogeographic oyster study (now drawing to a close), but for the past year or so I’ve also been managing our side project in the Bay Mouth Bar system, a sandbar and seagrass bed near the FSU Marine Lab. Bay Mouth Bar is a naturalist’s playground filled with surprises and an astonishing diversity of marine creatures that never ceases to amaze me. It is also a unique study system with an intriguing history out of which we can begin asking many interesting questions. This coming fall I’m excited to be starting as Dr. Kimbro’s Ph.D. student at Northeastern University, and for part of my dissertation I’ve decided to conduct some new experimental research this spring and summer out on Bay Mouth Bar. Bay Mouth Bar is known for its especially diverse assemblage of large predatory snails, which the ecologist Robert T. Paine conducted a study of in the late 1950’s. In 2010, we began surveying the snail community on the bar, interested in what changes might have occurred in the 50 years since Paine’s time, a period during which very little research had been done in this system. I began synthesizing some of the data we’ve gathered, as well as talking to some of the long-term residents of the area. So what has changed on Bay Mouth Bar since the 1950’s? A number of things in fact: The two main snail species no longer found at Bay Mouth Bar, true tulip (The larger snail on the left, eating a banded tulip) and murex (right). The true tulip was, along with the horse conch, a top predator of the ecosystem, while the murex is a specialist snail, eating only clams.

Why is this interesting? Worldwide, we know that species diversity is declining as a result of human activities, that specialists are being increasingly replaced by generalists, and that consumer and predator species often face a disproportionate risk of local extinction. So what are the consequences of realistic losses and changes to biodiversity? Is having a diversity of predators beneficial (e.g. both horse conchs and true tulips) to an ecosystem as a whole? Do some species matter more than others? And how do the effects of predators depend on the type of habitat they’re in, given that habitats (like seagrasses) are also changing in response to the environmental changes? These are some of the questions I’m hoping to address in Bay Mouth Bar system, in which we have documented historical changes in predator diversity. One of communities in Tanya’s experiment. At the center are top predators reflecting either the current assemblage (a horse conch alone) or the historic assemblage (the horse conch and true tulip).  The predators are tethered to posts and given enough line to reach the lower level predatory snails (murex, lightning whelks, banded tulips, and Busycon spiratum) on the outside.  Those snails have enough line to get out of the large predator’s reach and forage for food.

Music in the piece by Donnie Drost.  Theme by Lydell Rawls.