Four years ago, we traveled out into the oyster reefs of Alligator Harbor with Dr. David Kimbro.  It was both the start of an ambitious new study and of our In the Grass, On the Reef project.  Last June, we went back to those reefs with Dr. Randall Hughes as she, David, and their colleagues revisited study sites from North Carolina to the Florida Gulf.  In 2010, they sampled the reefs with nets and crab traps, and harvested small sections of reef.  This more recent sampling, which unfolds in the opening scenes of our recent documentary, Oyster Doctors, was conducted with underwater microphones.  Randall explains how sound became a tool in further understanding fear on oyster reefs.

The research in the following post was conducted while Randall and David worked at the FSU Coastal and Marine Laboratory.

A little over a year ago, I wrote about our research project, motivated by a question from WFSU producer Rob Diaz de Villegas, to test whether crabs can hear the “songs” made by their fish predators. At the time, the work had not been published, and so I was not able to share all of the juicy details. But now it has, in the Proceedings of the Royal Society B, so I can finally answer with a resounding YES!

To review a little bit, Rob’s question really had 2 parts:

To answer #1, we paired up with Dr. David Mann. Dr. Mann is an expert in bioacoustics, and particularly in evaluating whether marine critters (primarily fish) can hear different sounds. We modified his methods slightly to accommodate our mud crabs – basically, we needed to immobilize the crabs on a ‘stretcher’ so that we could insert one electrode near the crab’s antennae, and another in the body cavity to pick up any background “noise” the crab may be produce that was not in response to the acoustic stimuli. Although it looks like mud crab torture, all the crabs survived the experiment! 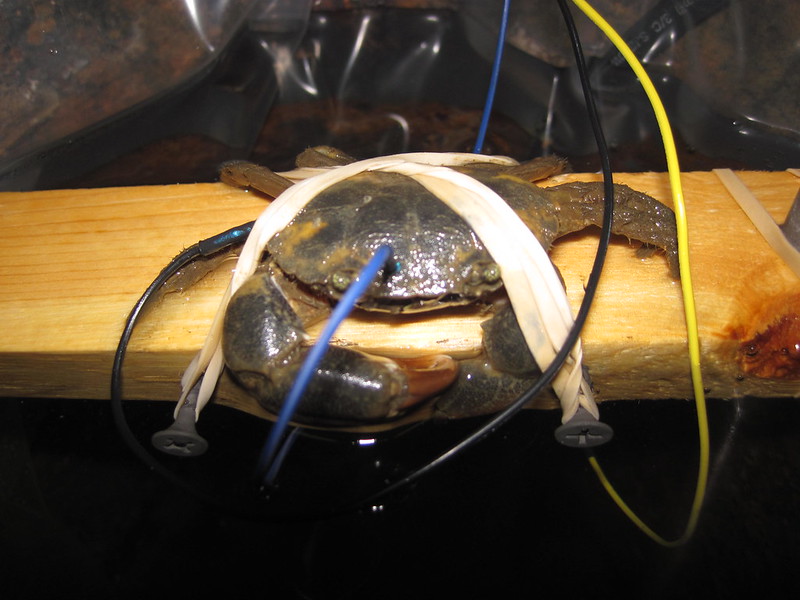 What did we find? The crabs had a neurological response (i.e., they “heard”) a range of frequencies. They certainly wouldn’t ace any hearing tests, but if a sound is low- to mid- frequency and relatively close by, they can likely hear it. They do this using their statocyst, a structure containing sensory hairs that can detect changes in orientation and balance, and in this case, can detect changes in particle acceleration associated resulting from the acoustic stimuli.

Although cool to someone like me who is fascinated by marine biology, many of you are probably thinking “So what?”. And for that, we turn to the second part of our study, where we tested whether mud crabs change their eating habits in response to the songs made by their fish predators. We compared the number of juvenile clams that crabs ate when we played them either a silent recording or a recording of snapping shrimp (a common organism on oyster reefs that doesn’t eat crabs) to the number of clams that they ate when we played them recordings of songs from 3 fish that DO eat mud crabs – hardhead catfish, black drum, and toadfish. Apparently catfish and black drum songs are the same to a crab as the Jaws theme song is to me, because they hunkered down and did not eat nearly as many clams when they heard the calls of those two predators. Phil Langdon feeds a catfish in an iteration of a mud crab hearing experiment.  They had already noticed that mud crabs were eating less when they heard sounds made by catfish and other predatory fish.  Here, they sought to measure whether the response was more intense with chemical cues (pumped via those tubes into tubs), or predator sounds (played from underwater speakers).

So, now we know that mud crabs can hear, and that they don’t eat as much when they hear some of their predators. But we also know from our earlier experiments that these same crabs don’t eat as much when exposed to water that hardhead catfish have been swimming in, most likely because they can “smell” chemicals in the water that the fish give off. So which catfish cue generates a stronger response – sound or smell? Turns out that both cues reduce crab foraging and to about the same degree, although in our experiment the effects of catfish songs were slightly stronger than the effects of catfish smell.

So what’s the take-home message from this work? For one, it highlights that we still have a lot to learn about the ocean and the animals that live in it – we (and others) have been studying these mud crabs for years and never thought to consider their ability to use one of the 5 major senses! In addition, it’s a reminder that in studying the “ecology of fear”, or the effects that predators have on their prey even when they don’t eat them, we need to remember that few predators are silent, and the sounds that they make could be important cues that prey use to escape being eaten. And finally, it demonstrates that science can be really fun!

Susan Cerulean’s New Book: I Have Been Assigned...