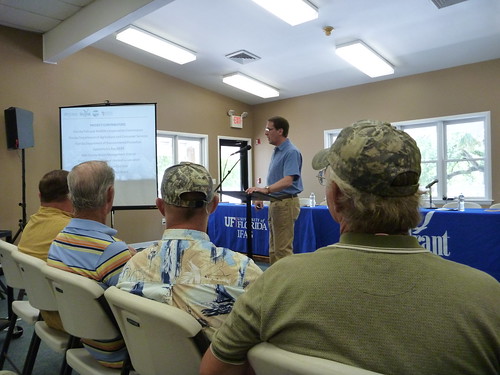 The leaders of SMARRT look on as Dr. Karl Havens presents the Oyster Task Force’s report.

This past Wednesday researchers from the University of Florida Oyster Recovery Team presented their report on the state of Apalachicola Bay oyster fishery.  The Apalachicola Community Center was filled with concerned locals, many of which were oystermen.  They were looking for news on the crash of the fishery and recommendations for future action.

The task force is made up of UF researchers and our collaborator, Dr. David Kimbro of Northeastern University (and until recently, Florida State University).  They collected and analyzed historical sets of data on the health and abundance of oyster stocks in the bay, and added current field observations.  This data was then used to create a model which would predict the success of restoration efforts under different flow conditions on the Apalachicola River.

Here is some of what was discussed in the meeting: 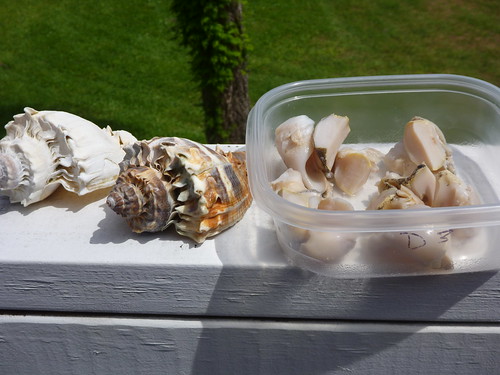 The queen conch (Strombus gigas) is a popular delicacy, but it is under current consideration as an endangered species. Interest is growing in using the related crown conch (Melongena corona, shown above) as a substitute meat.

The hope is that some of the partnerships and research work can continue despite a lack of funding, and even after the fishery recovers.  “I’ve said it over and over and over again, most of our information comes from the really extreme low events,” said Dr. Bill Pine.  “And we don’t know how these systems look during normal flow or high events.”  As he pointed out, research doesn’t always get done when the system is healthy, and that leaves gaping holes in the data.  Likewise, this unprecedented collaboration between seafood workers, the state agencies that manage the fishery, and the research community was created in crisis.  Will it survive as the fishery recovers?

The meeting on Wednesday was part of one of our busiest months of production for In the Grass, On the Reef.  This week alone, we went from one end of our viewing area to another, starting with an EcoAdventure on Slave Canal (towards the eastern end of our range) to Choctowhatchee Bay for a look at a different kind of oyster restoration project (that’s as far west as we air).  We tagged along on an oystering trip and got footage for videos dealing with another coastal ecosystem susceptible to drought: the salt marsh.  We’ve logged a lot of miles, and I have a lot of footage to put together.  Here is a preview:

In the Grass, on the Reef is funded by a grant from the National Science Foundation.

Thanks, this is very informative! I had been wondering why the Apalachicola oysters I’ve eaten lately have been so salty – not that it’s a bad thing, they just seem much brinier than in seasons past.

[…] wrong is not something that comes naturally to anyone. But that is how I felt at the most recent oyster task force meeting in April. There, I shared some early research results about the condition of the oyster reefs. In […]