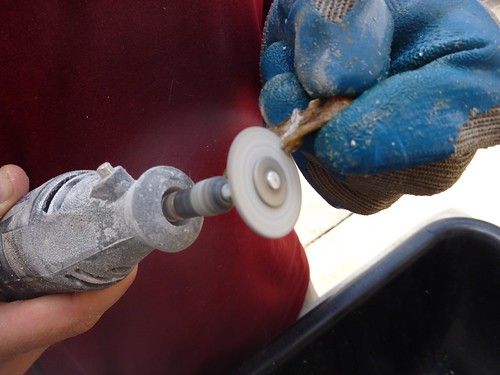 The whirring sound, the smell of calcium carbonate dust, the warmth of his face behind the mask and goggles- this is the stuff of David Kimbro's dreams.

The WFSU crew stayed the night in St. Augustine to accompany both the Net/ Fish and Tile teams when they headed out at sunrise.  After breakfast, I went out to the lab space (we’re all staying at a research facility very near the reefs they study), and David Kimbro was there, before the sun had made its way out, separating shards of shell with spat on them.  He’d missed all of the field work here up to that point so that this experiment could work.  Until this afternoon, it was all I had seen him do here.  If he was able to focus in on this one aspect of this large an undertaking, it is because Hanna and Tanya have been able to operate independently and pick up the slack.  By the time he actually made it into the field, David followed Tanya’s lead.

Also working hard on this trip are my poor sneakers.  I have an old pair that I designated for my work on this project, shoes I knew I would never wear for anything else.  The reefs in Cedar Key and St. Augustine have torn them up.  I keep stepping in soft mud that hides oysters, or stray clumps cloaked by muddy water.  It might be time to invest in boots. 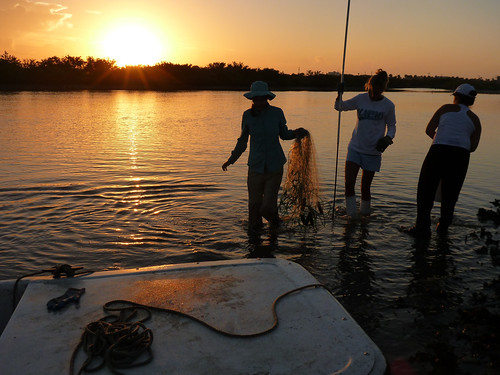 There's nothing like the smell of dead fish in the morning.

7:30 AM– Hanna, Tanya, and Cristina went out to retrieve the catch from the gill nets, take sediment samples, retrieve the data loggers, and take some fish stomachs (how else would you know what the predators were eating?).  They also replaced the spat sticks, which were still only attracting barnacles.  Tanya noticed, however, that spat would settle on the rebar below the stick.

A couple of Environmental Scientists from the St. Johns River Water Management System agency kayaked up at some point to watch the proceedings.  They are working with David’s lab to determine why these once commercially viable reefs were overrun and depleted by crown conchs.  The problem seems to be very localized, occurring between Ponce Inlet in New Smyrna Beach and Matanzas Inlet.  David is hoping for more “spinoff projects” like this one, in which he and his lab can use applied science to help specific reef systems.

And while we’re on the topic of predatory snails, Here’s that pic of the Atlantic Oyster Drill: 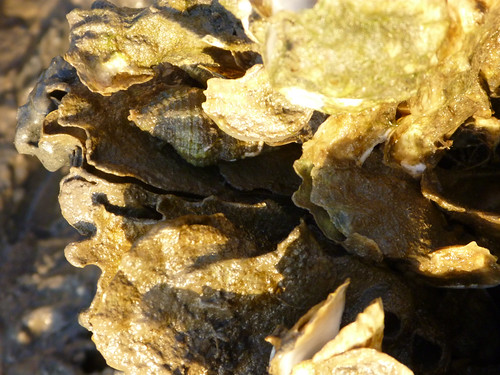 2:30 PM– Hanna and Cristina headed to Jacksonville to begin removing clumps of reef with Jacksonville spat on them. But first they were to inspect the house they were renting to see if there was a suitable area to make their Jacksonville spat tiles. That process involves keeping oysters in large tubs of water, prying shells off of the clump, and using a dremel to make the pieces somewhat uniform in size. If I was renting someone a house, I wouldn’t want them doing that in my bathroom. Hanna determined that the house did not have a workable area, causing a shift in their plans. Hanna and Cristina now had to bring the reef segments back to St. Augustine to process. Instead of deploying nets in Jacksonville Wednesday morning, they’ll have to do this in the afternoon after processing the spat all day. And instead of finishing with Jacksonville on Thursday morning, they’ll be there all day (causing David to make his three hour drive home at night).

5:00 PM– David and Tanya retrieve the small fish traps.  A couple of the fish they catch are pretty colorful, I suspect they’re something that once lived in a saltwater aquarium.  They also deployed the tiles into which so much effort had been expended.  It’s a major part of this study, and David is happy to get started on it just five months after that first day in Alligator Harbor.  And it’s still early enough in this three year study that they can tweak the experiment and try it again next year (experiments of this nature don’t always work the first time).

After all the work was done, Tanya made a tasty four-bean vegetarian chili, and everyone enjoyed a relaxed dinner before convening again at 7:30 AM to process more spat. 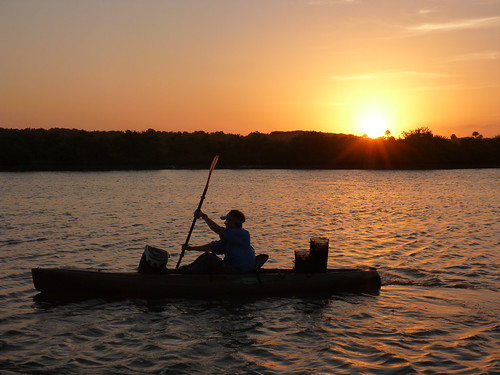 David finally makes it out into the field.

Reading about your adventures both culinary and biology related is fascinating! Makes the rest of us armchair biologists learn something. Thanks for keeping Hanna’s family informed! Carroll Garland