I love how David’s story evolves in the segment above.  At first, he concentrates on the oysters and their point of view in the Apalachicola fishery crisis.  It’s the biological approach.  After workshopping his story with Randy Olson, his story takes on a different aspect.  It’s about why he’s getting involved.  It’s the personal approach.  The story is still about David and his colleagues studying the reefs in Apalachicola Bay to determine how best to rehabilitate them, but the hook is different.  It’s one of the stories we’ll be following in what should be another busy year on In the Grass, On the Reef.

Before we look forward to 2013, though, I wanted to look at the stories that made 2012 our busiest year to date:

Funded by the NSF

It took a couple of years, but in July we received a Communicating Research to Public Audiences grant from the National Science Foundation.  The name of that grant is meaningful, and it embodies a background narrative of this project: the work it takes to make an average person care about scientific research.  Researchers know why their work is important, they just don’t always know how to present why it’s interesting.  That’s why we had Dr. Olson come in and put on a workshop for research students (and Randall and David).  So why is Randall and David’s research important? In short, biology affects people’s livelihoods.  The seafood connection is obvious: over 90% of the species that are commercially fished in the Gulf of Mexico spend some part of their life cycles in one of the three estuarine habitats that we follow: oyster reefs, salt marshes, and seagrass beds.  We saw that oysters offer more to the seafood industry than their meat.  And we’re starting to see the effects of a full-scale ecosystem failure on a community (more on that below).  The non-seafood related benefits were surprising to me.  A rugby field sized patch of salt marsh can save $8,000 in storm surge related property damage.  Seagrass beds are the most effective habitat at storing carbon from the atmosphere.  And in a state as reliant on tourism dollars as Florida, you can’t overlook the ecotourism potential of our coastlines.  Last spring, we went down to the St. Marks National Wildlife Refuge when migratory shore birds were making their way through.  The refuge’s vast salt marshes are an all-you-can-eat buffet for those birds, and you have to figure that without healthy rivers and coasts, our state’s multi-billion dollar wildlife watching revenue would be imperiled.

Away from the coasts, I enjoyed exploring the geology of the Aucilla Sinks and the rare plants of the Saint Joseph Bay State Buffer Preserve.  The Buffer is part of the Apalachicola River basin, and those plants rely on that water just as the oysters in the bay do.  Which brings us to: 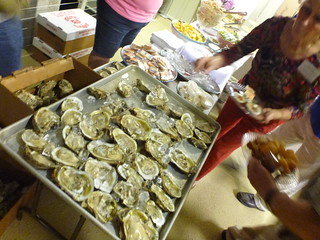 Earlier that afternoon, oystermen were demonstrating how few oysters there were in Apalachicola Bay for the Army Corps of Engineers. At a reception later that night at the Apalachicola National Estuarine Research Reserve, they shucked oysters for community members. Despite doubling in price over the last year, there aren't enough oysters to maintain the fishery.

At this time last year, when we were waiting to hear whether we got the NSF grant, I was looking forward to some of the things we would do.  I knew that, as we explored the economic benefits of oysters, I would end up on an oyster boat.  It would be fun to watch tongs bring up mounds of succulent Apalachicola oysters.  My first time on an oyster boat didn’t exactly go that way.  As the year wore on, I started planning for RiverTrek 2012.  That was every bit as amazing an experience as I expected it to be, but Helen Light’s presentation on the state of the basin that first night underscored everything that happened after.  Crisis drives a lot of media coverage; it attracts viewers.  I don’t think Apalachicola needs crisis to be interesting, though.  I first visited in 2002 while working on WFSU’s Our Town series.  Each Our Town episode first aired during a pledge drive, and Our Town: Apalachicola was far and away the most successful, with over 50 new members pledging their support to our station.  And it was my favorite.  A couple of months after we premiered it at the Dixie Theatre, I came back for my birthday.  My wife and I camped out on St. George Island, went across the bay to get oysters and had drinks at the Gibson Inn.  So this isn’t the story I wanted to tell.  But there is something to be learned from this about oyster reef ecology and our connection to it.

As David and his crew gear up to investigate more closely, that story will continue here.  Also, Randall and David’s two multi-year, NSF funded studies are concluding.  They put their ideas to the test:  Does the fear of being eaten by large predators have a significant effect on coastal ecosystems and all that they give us?  And, it’s a word we hear a lot, but what role does biodiversity play in the success of a salt marsh and its services?  Stay tuned.

My Garden of a Thousand Bees