Dr. Randall Hughes has collaborated with WFSU on this blog since 2010. We have spent years visiting her research sites in Saint Joseph Bay, where Randall conducted a multi-year study on salt marsh biodiversity funded by the National Science Foundation. The study has concluded, and Randall has published several papers on her findings. Here is what she has found.

This is Saint Joe Bay week on the Ecology Blog.  Wednesday, August 20th, at 7:30 pm ET: WFSU premieres the eighth season of Dimensions, and our Saint Joseph Bay scalloping EcoAdventure. Just a bunch of grass? Not to the larval shrimp, juvenile mullet, pinfish, fiddler crabs, mussels, periwinkle snails, and blue crabs that make use of the habitat, or the birds and sea turtles that go hunting there.

As you drive along Highway 98 towards St. Joseph Bay (SJB), one of the most common views outside your window is of the salt marsh.  From the car, it looks like a beautiful but monotonous meadow of green and/or brown, depending on the season, often intersected by tidal channels. So I won’t blame you if “diversity” is not the first word that comes to your mind as you gaze out the window. But diversity is exactly what I set out to find out about when this project first started – how much diversity is there in the marshes of St. Joe Bay, and what (if any) effects does it have? And now, several years later, I finally have answers to share!

First, let’s revisit what I mean about diversity. There are 2 main types that I have focused on for my research: 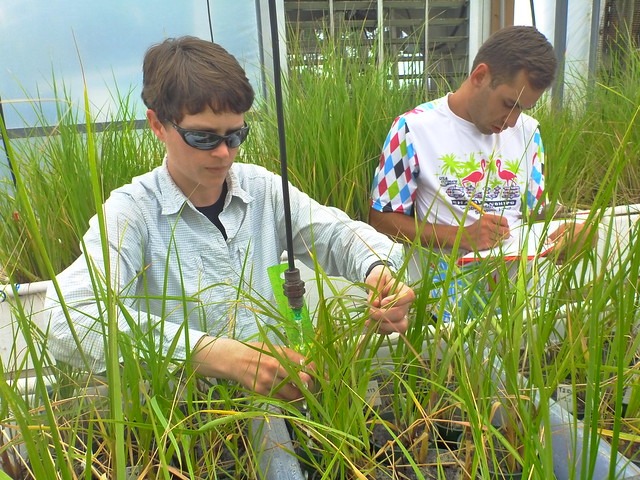 Randall and technician Ryan Coker tend to plants in an FSU Coastal & Marine Lab greenhouse. Before Randall and her team could begin to test their theories about marshes and marsh grass, they needed to create controlled marsh units of a comparable size, and needed to know the genetic identity of the grass in their plots.  Randall grew this grass for two years before conducting those experiments.

Wait – why so much talk about plants? Don’t animals have diversity too? Animals do have diversity, and this diversity matters – for one, having more species of fish on a coral reef means the corals grow better. But plants are the foundation of the marsh – if you have no plants, you have no marsh. So I have focused on the species and genetic diversity of the plants and tested how it affects the number and diversity of animals that live there (which includes animals that we like to eat, such as blue crabs). The dominant marsh plant species in many areas is cordgrass (Spartina alterniflora), and we created a greenhouse full of known genetic individuals to use in many of our experiments. Here are some of the highlights of what we have learned, with a little background on each, and links to the published articles where you can learn more if you’re interested:

1. Increasing the number of plant species in the marsh, even just from one species to two, can reduce the negative effects of a hungry periwinkle snail.

Randall published these findings in the Ecological Society of America Journal.

2. Contrary to conventional wisdom that a few cordgrass individuals (also known as “clones”) rule the marsh, genetic diversity can be quite high, with as many as 9 distinct individuals living together in an area the size of a hula hoop. 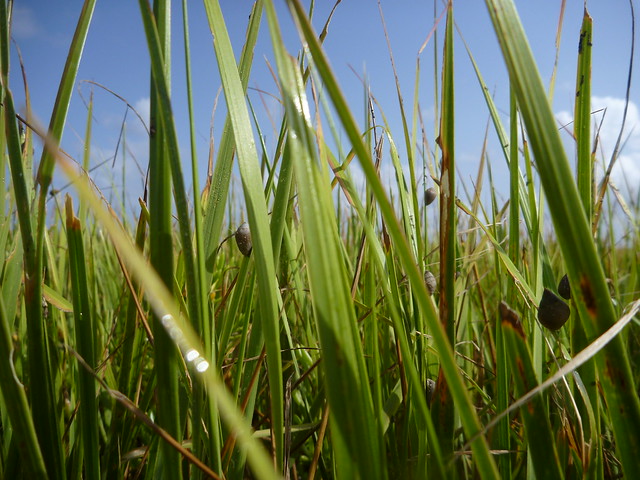 Smooth cordgrass (Spartina alterniflora), the foundation species of a coastal salt marsh. Before she could understand how the genetic diversity of this species affects the health of a marsh, Randall needed to know how many genetic individuals were present within the ecosystem.

Genetic diversity is really important for the ability of plants and animals to respond to stress or change, and so it’s something we often want to know, but the bummer about it is that it’s not nearly as easy to measure as species diversity. You can’t just look at two cordgrass plants and tell whether they are the same or different genotypes! I teamed up with Dr. Katie Lotterhos to use little snippets of DNA to tell us whether the cordgrass plants we collected from the marshes around SJB were all a few closely related individuals, or whether there were lots of different individuals around. It turns out that even though they all look pretty much the same, there is a lot of genetic diversity in our marshes.

Randall and Katie published these findings in the Inter-Research Science Center’s Marine Ecology Progress Series (link is a PDF). A monoculture plot of four genetically identical cordgrass individuals. In this experiment, similar to the one described to the right, plots were composed of one, two, or four separate individuals. Did plots with higher diversity fare better?

3. Changing the number of cordgrass clones living together in an area the size of a hula hoop affects how well the plants grow, as well as how many animals share that space. These effects of diversity may be particularly important when plants are first colonizing an area, such as in restoration efforts.

Once we knew how many different genetic individuals shared a hula hoop-sized area in natural marshes, we did an experiment to see how changing that number affects how well the plants grow. This experiment took a long time to prep, because we first had to grow a bunch of plants in the greenhouse so that we could keep track of who was who. After that, the experiment itself was pretty simple: plant 1, 3, or 6 different clones inside a hula hoop (well, in this case it was a modified hula hoop made of less expensive irrigation tubing) at the edge of the marsh, and watch them grow over time.

Randall published these findings in the British Ecological Society’s Journal of Ecology.

4. Just like you and me, different cordgrass clones have unique characteristics – some are tall, some are short, some do well in a crowd, and some like a little breathing room. And the animals that live amongst these plants, such as mussels and fiddler crabs, can go from being friends to enemies depending on which clone they are interacting with.

Even though I said before that all cordgrass plants look similar, it just so happens that when you grow the same clones in the greenhouse for a few years, you start to see slight differences among them. And these differences that seem pretty minor to us are really important to the small animals like fiddler crabs and mussels that live on and around the plants. So, in part to test this idea that different clones have different relationships with fiddler crabs and mussels, and in part just to do an experiment with fiddler crabs because I think they are cool, we set up an experiment using different cordgrass clones growing with just fiddlers, just mussels, or both. And although typically mussels and fiddlers are both “friends” with cordgrass (in that they provide it with nutrients and oxygen in the sediment to help it grow), that is not a universal truth – some cordgrass clones did not benefit (or even were harmed) by having mussels and fiddlers around.

Randall, her graduate student Althea Moore (whose investigation of a similar relationship between mussels and another marsh plant we covered in 2013), and Randall’s oyster collaborator Mike Piehler published their findings in the journal Oikos.

It’s a little disconcerting that ~ 4 years of work can be boiled down into these 4 highlights. Of course there are loads of details I’m leaving out, as well as other ongoing projects that will tell us even more about the effects of diversity in the salt marsh. That’s how the scientific process works – you gain some answers, and those answers lead to new questions! Job security for a curious mind…