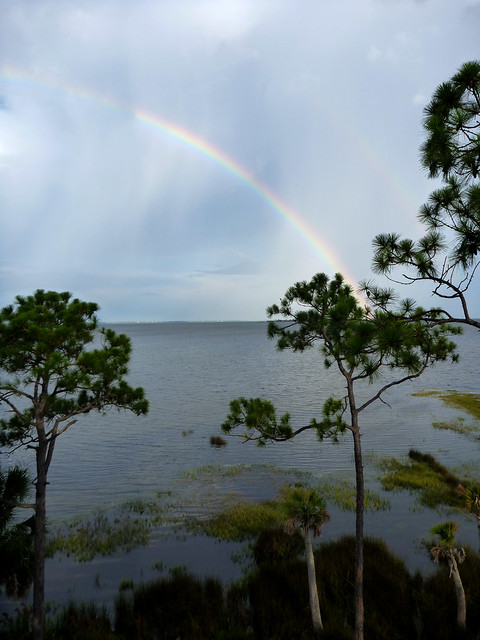 I figured it was a good sign that our first glimpse of Saint Joseph Bay was of it under a double rainbow.  Of course, that required me to ignore all of the rain clouds that caused the rainbows, and some of the far off lightning I saw on our drive to Port Saint Joe.  But why head into my shoot with a negative attitude?  It didn’t take long for the sun to come out after we got on Captain Bobby Guilford’s boat.  I can’t control the weather, but if I could, I’d have arranged it like it turned out.  First, some clouds and precipitation for the rainbow shot, and then the sun we needed to shoot in seagrass beds and, more importantly, to see the scallops we were there to find.  Florida weather is just as often a friend to our shoots as it is a nasty nemesis.

This was a segment I’d been wanting to do since the first summer of the In the Grass, On the Reef project.  I spent a lot of time in Saint Joseph Bay following Dr. Randall Hughes’ salt marsh research, and when scallop season started I would see people head into the bay with buckets, kayaking out with buckets, or zipping by on boats.  Scallops are some of my favorite food.   In the Grass, On the Reef could just as easily have been called Getting to Know the Places Where the Food I Like Lives.  And I did get to know about seagrass beds, and snorkel in Saint Joe Bay looking for shots of horse conchs, sea stars, and even scallops.  What I learned in my time with Randall and her colleague, Dr. David Kimbro, is that seagrass beds are really cool!

Seagrass beds are remarkable ecosystems, and they’re a big part of why I love going back to Saint Joseph Bay as well as other locations on the Forgotten Coast.  Here are some of the cool things I learned about them from my collaborators’ research: 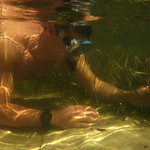 In 2012, Dr. Peter MacReadie visited Randall in Saint Joseph Bay from the University of Technology in Sydney.  We talked to he and Randall about ecosystem services provided by seagrass beds, and Peter talked to us about the surprising ability of seagrass beds to store carbon from the atmosphere.  As Randall points out in a 2012 post, their storage ability is on par with forests. 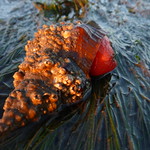 Our local seagrass beds house a wealth of diversity.  Dr. Robert Paine studied Bay Mouth Bar, just off of Alligator Point, over fifty years ago.  The bar may have the greatest diversity of predatory snails in the world. His observations of the top predator- the horse conch- and the rest of the animals on the bar when the horse conch was present versus when it left in the winter, were influential in Paine’s pioneering of the keystone species concept. The horse conch consumes other snails, keeping their numbers in check so that those snails don’t in turn consume too many clams. The clams benefit the seagrass by filtering water, and so the horse conch is of vital importance to clams and to the habitat. As we know, David Kimbro is very much interested in predators, and so it is natural that he would spend years following up on Paine’s work, even unfunded.

(The one clam that horse conchs eat is the largest you can find in our seagrass beds, the pen shell. That’s what we see Bobby and Adrianne eating in the video above.) 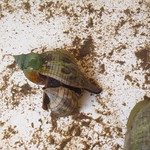 While it’s great that seagrass beds help combat global climate change, provide habitat for scallops and other seafood species, and help filter water, they unfortunately are a habitat on the decline. As seagrass beds shrink, they tend to house a less diverse assemblage of animals. David Kimbro’s graduate student, Tanya Rogers, used a local seagrass habitat to look at the effects of losing diversity. Specifically, the loss of a top predator. David and Tanya have been conducting a follow up to Robert Paine’s Bay Mouth Bar research in the early 1960s. Five decades later, they found that the seagrass beds there are shrinking, and certain snail species have disappeared. This includes the true tulip snail and murex, which are still plentiful in Saint Joseph Bay. The true tulip was a major predator on Bay Mouth Bar. Tanya conducted an experiment to determine how the loss of this predator would affect the clams in the sediment, and how those clams in turn affected the sediment where the seagrass grows. Did the loss of habitat force the tulip off of the bar, or did the loss of tulip (which eats clam consuming snails) help cause the seagrass habitat to shrink?

As global temperatures rise, the ocean is acidifying. This will have increasing ramifications for the plants and animals living in saltwater ecosystems, such as the oysters, clams, and scallops whose shells will weaken. However, recent research shows that seagrass beds might fight that acidification.  Good news for the clams and scallops that live there! 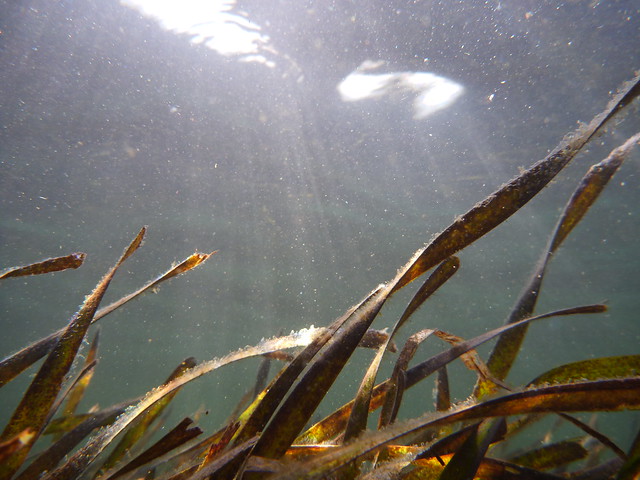