Tallahassee SciGirls camp is a collaboration between WFSU and the National High Magnetic Field Laboratory.  Among their many adventures in science are opportunities to explore our local wild places with the people who study them…

We’re bumping along on the network of trails that crisscross Tall Timbers.  The SciGirls are piled into one of the flatbed trailers that Tall Timbers uses for tours.  They have already been shown the fire plots (as seen in roaming the Red Hills!) and have been educated on the basics of fire ecology.  Now it’s time for some field work.  It’s time to band a Bachman’s Sparrow.

There are three bird species endemic to the longleaf habitat.  As the totality of longleaf forests shrank from 90,000,000 acres to 3,000,000, so did numbers for the species most closely associated with it.

The red cockaded woodpecker is an icon of this ecosystem, nesting in mature longleaf pine.  The brown headed nuthatch is kind of a cute bird, an unmistakable blue, brown, and white.  The Bachman’s sparrow, on the other hand, is a little nondescript brown bird.  At least, it is from a distance.

Luckily, Tall Timber’s vertebrate ecologist, Jim Cox, is going to catch one for us. We stop at a spot where Jim has seen Bachman’s sparrows recently.  He runs out into the woods, and our production crew runs behind him to get a good look at him setting up the mist net.  The net is almost invisible to the bird, and when he plays its call from an MP3 player, it flies right in.

This is the tensest part of the operation.  He works quickly and delicately to remove the bird safely and put it in a bag.  One wrong move, and the bird could break its leg.

Next, he takes it out to measure and weigh it.  When he bands it, this is the first information, along with its location and the date, that gets logged for the bird.  If the bird is resighted later, it won’t be recaptured.  But its location will be again recorded, and we’ll get a sense of what the bird is doing over its life. Jim Cox affixes colored bands to the legs of a Bachman’s sparrow.

He affixes a unique color combination to the legs of the sparrow.  This combination is its name, and it can’t have the same “name” as any other Bachman’s sparrow, or the information collected about it later will be useless. 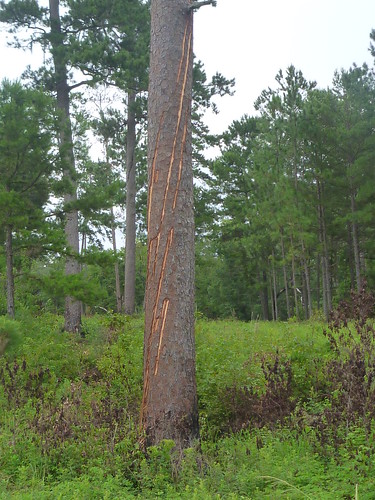 One of several trees we saw at Tall Timbers that had been struck in a recent lightning storm. Strikes like these used to spark massive fires that kept the 90 million acre coastal plain forest healthy.

Getting hands on with the other critters of the longleaf forest

The Bachman’s sparrow is a ground forager, so it doesn’t just need a longleaf forest- it needs a forest that burns frequently.  This ecosystem thrives with a 2-3 year fire interval.  When fire is excluded, woody shrubs become trees and crowd out grasses, flowers, and succulent plants.  It’s a diverse group of plants that calls the floor of a longleaf forest home, and it supports an equally diverse assemblage of animals. A SciGirl points an antenna in the air, looking for a signal from a hidden transmitter.

One such bird is the bobwhite quail.

Tall Timbers was once a hunting plantation.  It got into the business of studying fire ecology to create a better habitat for this game bird.  Many other species have benefited from this desire to head out in old-timey wagons and on horseback in search of a covey hiding where the forest edge meets an open field.

After banding the Bachman’s sparrow, the SciGirls meet up with Kellie Phillips, a graduate student at the University of Georgia’s Warnell School of Forestry.  She shows them how Tall Timbers uses radio telemetry to track bobwhite quail on the property.  This gives researchers more of a real time look into the movements and habits of the birds than banding does.

In the 1970s, Dr. Bruce Means started using radio telemetry to track snakes (such as the eastern diamondback rattler) at Tall Timbers, a tradition continued today by Kim Sash. Tall Timbers herpetologist Kim Sash holds a rat snake in one hand, and a corn snake in the other.

The SciGirls are figuring out what scientific field to pursue, and it’s good for a budding biologist to know for sure whether they have it in them to get hands on with an animal.  And it’s better to find out in middle school than halfway through a bachelors degree: Other Adventures in Fire Ecology:

The Carnivorous Plants of State Road 65 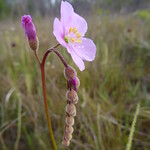 If you’re hiking in regularly burned woods and come upon a thick tangle of wood, you’re likely nearing water.  The area between the two habitats, at the edge of both fire and moist mucky areas, is where, in late Spring, you can find some very interesting wildflowers.  Dr. Tom Miller guided us to a bog the Apalachicola National Forest where we could walk among pitcher plants, thread-leaf sundews, and other flowering plants that get their nutrients not from the soil, but from animal flesh.  This is the kind of disturbed area the plants prefer.  Regularly mowed roadsides along the forest also sport carnivorous flowers.  Eleanor Dietrich took us along S.R. 65 and talked to us about her efforts to draw more people to the area to see these unique plants.

Rare Plants Thrive with Fire at the Buffer Preserve 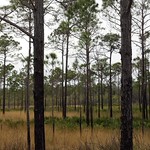 The Apalachicola National Forest and the private forests found on the hunting plantations of the Red Hills of Florida and Georgia house some of the largest and best preserved examples of the coastal plain forest that used to dominate the southeast.  A lesser known but equally impressive example can be found at the Saint Joseph Bay State Buffer Preserve.  Dr. Jean Huffman showed us some of the rare plants growing there, many of them found hidden among the wiregrass.  And the Buffer is also home to one of the rarest wildflowers in Florida, the Chapman’s rhododendron. The blog post that accompanies the video explains how Dr. Huffman uses tree rings to determine how often trees had historically burned, useful information in setting a burn schedule.

Also, WFSU-FM’s Nick Evans travelled to the Buffer at a different time of year, and saw a number of different rare plants.