We tagged along with the Tallahassee SciGirls (a joint venture between WFSU-TV and the National High Magnetic Field Laboratory) as they visited Wakulla Springs. The following video explores the link between the spring, the aquifer, and the aquifers many sources of water. In the blog post below, we further explore some issues raised in the video and examine some key points in the recently released Wakulla Spring Restoration Plan.

When I was talking to Peter Scalco in the video above, I was surprised to hear him say that manatees had largely eliminated invasive hydrilla from Wakulla Springs State Park.  How cool is that; nature comes in and cleans up the mess.  More surprising to me, however, was when he said that the removal of the hydrilla had negatively impacted invertebrates in the park.  Invertebrates are at the bottom of the food web, and losing them meant losing ducks species that ate them. 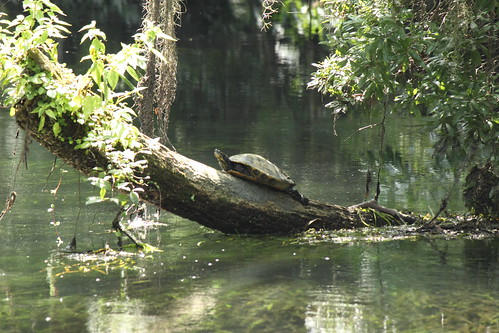 In a place whose name means “mysterious waters,” however, things are rarely so clear.  The park had also used chemical means to treat the hydrilla.  Since we interviewed the park manager during the SciGirls’ visit in July, the Howard T. Odum Springs Institute released its Wakulla Spring Restoration Plan (PDF).  In referring to the hydrilla problem, the report states that “herbicide control of hydrilla can result in unintended consequences such as invertebrate mortality, depressed dissolved oxygen levels, loss of desirable submerged plant species, and increased algal cover” (page 103, or the 118th page of the attached pdf- page numbers rarely line up in these larger documents).   This means invertebrates may have been killed by the herbicide Aquathol.  Or it may have been, as Mr. Scalco’s believes, that invertebrates lost hydrilla as a habitat and could no longer thrive in the river.  A third possibility is that Aquathol may have affected some of “desired submerged plant species” which may also have been habitat for the invertebrates.  Florida Department of Environmental Protection’s Joe Hand surveyed the river in 2001.  He noted that while the herbicide reduced hydrilla, “the cover of [native] eelgrass also decreased from 50% to 30% during this period of herbicide use.”  (65/ 79)   Based strictly on observation, and without the benefit of a controlled experiment, it’s hard to identify a definitive cause.

This call for closer study is made elsewhere in the report, when discussing the relationship between hydrilla and nitrates in the spring run.  The increase in hydrilla coincides with an elevation of nitrates over the years.  Elevations of nitrates in a body of water, often caused by stormwater runoff carrying fertilizer, can supercharge plant growth and lead to toxic algae blooms.  It seems plausible that an increased nutrient load would promote the growth of hydrilla, but in this case it just hasn’t been proven.  The report outlines options for better determining causality:

One practical approach to address this lack of knowledge is to implement restoration activities that would increase the occurrence of clear water and lower the concentration of nitrate while simultaneously monitoring the cover and spread of hydrilla. A second approach that should be combined with the first approach is the development of a detailed ecological study of the factors affecting hydrilla success in Wakulla Spring and at similar control sites.

In other words, at a site where every condition was the same except the elevation of nitrates, how does hydrilla grow? Another mystery is the overall darkening of the water.  When we went with SciGirls, as well as on a couple of visits with my wife and kids over the summer, the water has been pretty clear.  But, as Mr. Scalco told us, “it is a dynamic system.”  Between 1987 and 2003, the water was clear enough for glass bottom boat tours between 17- 75% of the time.  Between 2003 and 2010, it was down to 0-15% (78/ 92).  That’s a drastic increase of dark water days in Wakulla Spring over the last decade.

Dark water has historically occurred as a result of an underground connection between the Wakulla Spring cave system and that of the Spring Creek system, 14 springs located in salt marsh habitat on Apalachee Bay.  Essentially, during periods of low rainfall, Spring Creek flows with such little pressure that saltwater backflows into the spring creating what the report calls a “plug.”  Any water that does flow into the system from the aquifer is blocked, reversing the flow back to Wakulla Springs.  During these times, when it does rain,  water entering the aquifer from the Apalachicola National Forest will be dark and tannic.  As rain increases, the plug is usually removed and clear water returns to Wakulla Springs (Described in more detail on 17/ 32).  This is the usual cycle.

So how was it disrupted?

It could be sea level rise.  It could be a rise in the salinity of Apalachee Bay caused by the same drought conditions that caused the crash of the Apalachicola Bay oyster fishery, and which tend to wreak havoc on estuarine systems.  Or it could be a change in the groundwater gradient (18/33).

One concern is that those of us who live in the springshed are using too much water, water that is directly removed by the aquifer by 27 wells in Leon County.  We in the Red Hills region are said to have exceptional groundwater.  The main reason for that is that rainwater has less immediate access to the aquifer here.  There are a handful of lakes with sinkholes that feed the aquifer- Iamonia, Miccosukee, Jackson, and Lafayette (Upper Lake Lafayette, specifically).  The rest of it is left to filter through thick red clay.  As Jamie Shakar with the City of Tallahassee Utilities told us in our first Water Moves video, it can take a decade or more for water to get down to where they extract it for us to drink.  The aquifer is recharged at a rate of 8 inches a year in this region, compared to 18 inches in the area just to the south of the Cody Escarpment, known as the Woodville Karst Plain (33/ 48).  In south Leon down through Wakulla, the aquifer loses the thick clay protection and the relatively exposed limestone is pockmarked with sinkholes.  What we withdraw from the aquifer in Tallahassee is not so quickly replaced.  This could be a reason that less clear water is coming out of Wakulla Spring- we are drinking that water.  And so one solution presented by the Howard T. Odum Florida Springs Institute is to promote conservation and education. 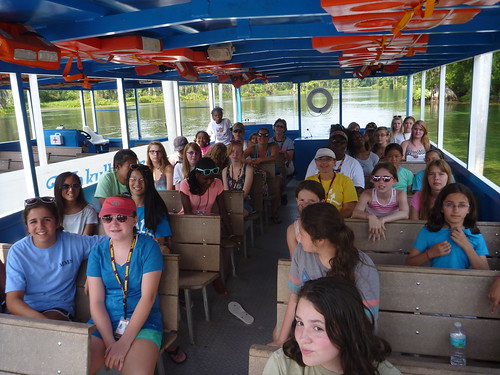 Sharing Water Conference organizers hope to attract teenagers- such as the SciGirls- to attend and become interested in water issues.

Will better efficiency in the way we water our lawns or take showers help to provide more clear water to the spring?  It’s hard to say with 100% certainty.  Vast underground networks of caves are not easily studied.  And it is definitely not easy to track every drop of water as it moves, gets absorbed, and evaporates on its way to and from the surface.  From October 2 through 4, the city of Monticello hosts the Sharing Water Conference.  I had a great time chatting with the event organizers yesterday after their appearance on WFSU-FM’s Perspectives.  They are bringing together geologists, policy makers, and other stakeholders to discuss the many issues facing the Floridan Aquifer.  Registration is free, and the hope is that people from every walk can come together to have a free exchange of ideas and help to work towards some innovative solutions.

I’ll preview the event next week, and will cover it for the WFSU Ecology Blog.  Also coming up this fall, we look at some of the small farms in our area for whom water is economically vital, and whose usage of water within the Wakulla Springshed influences spring flow.  The Red Hills Small Farm Alliance encourages sustainable practices; we’ll see what that means and how these farms fit into our natural landscape.  We also have some new EcoAdventures in the works as I am just itching to get back into a kayak and onto some trails.  We have some exciting stuff in the works, so stay tuned.