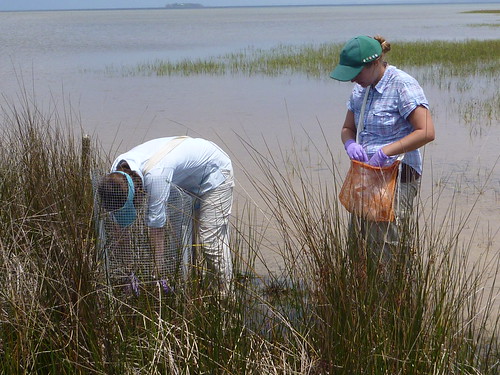 Randall examines an experiment cage as Robyn looks on.

Calling a one year experiment an “era” is probably a bit of an over-statement, but the end of our snail field experiment definitely feels significant. Especially for Robyn, who has traveled to St. Joe Bay at least once a week for the past year to count snails and take other data. And also for the Webbs, who were kind enough to let us put cages up in the marsh right in front of their house and then proceed to show up to check on them at odd hours for the last year!  And finally for this blog, because the beginning of the snail experiment was the first thing we documented last summer when we started this project with WFSU.  It’s nice to come full circle.

So why, you may wonder, are we ending things now? Is it simply because one year is a nice round number? Not really, though there is some satisfaction in that. The actual reasons include:

(1) The experiment has now run long enough that if snails were going to have an effect on cordgrass, we should have seen it by now. (At least based on prior studies with these same species in GA.)
(2) In fact, we have seen an effect of periwinkle snails, and in some cages there are very few plants left alive for us to count! (And lots of zeros are generally not good when it comes to data analysis.)
(3) Perhaps the most important reason to end things now:  it’s become increasingly difficult in some cages to differentiate the cordgrass that we transplanted from the cordgrass that is growing there naturally. Being able to tell them apart is critical in order for our data to be accurate.
(4) The results of the experiment have been consistent over the last several months, which increases my confidence that they are “real” and not simply some fluke of timing or season.

And what are the results? As I mentioned above, snails can have a really dramatic effect on cordgrass, most noticeably when our experimental transplant is the only game in town (i.e., all the neighboring plants have been removed). And not surprisingly, cordgrass does just fine in the absence of snails and neighbors – they’re not competing with anyone or being eaten! 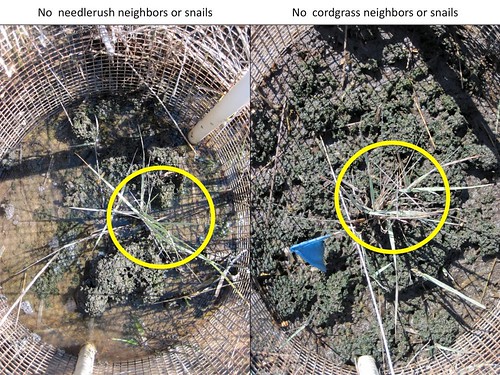 Snails also have a pretty strong effect on the experimental cordgrass transplant (compared to when no snails are present) when all of its neighbors are cordgrass. 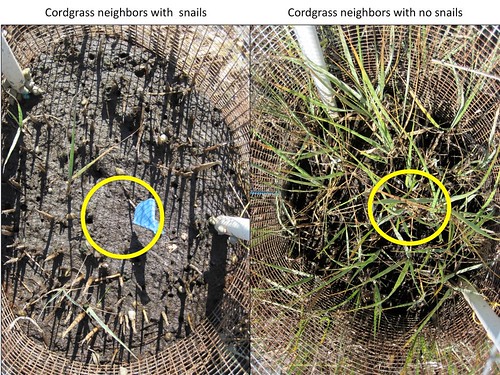 Most interestingly, snails do not have a big effect on the experimental cordgrass transplant when some of the neighboring plants are needlerush. 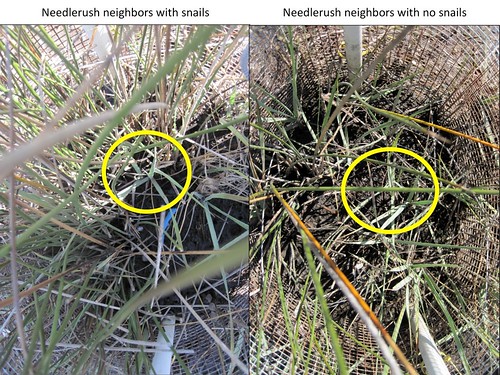 Having decimated the plants in the cage, the snails move towards the tallest structure they can reach- a PVC pipe.

But why? Those snails are pretty smart. They generally prefer to climb on the tallest plant around, because it gives them a better refuge at high tide when their predators move into the marsh. (We’ve shown this refuge effect in the lab – fewer snails get eaten by blue crabs  in tanks with some tall plants  than in tanks with all short plants.) Needlerush is almost always taller than cordgrass in the marshes around here, so this preference for tall plants means that snails spend less time on cordgrass when needlerush is around. And finally, less time on cordgrass means less time grazing on cordgrass, so the cordgrass growing with needlerush experiences less grazing pressure.

These results – consumer (snail) effects on cordgrass are lower when cordgrass grows mixed with needlerush – are consistent with theory on the effect of diversity, even though in this case we’re only talking about a “diversity” of 2 plant species.  And they could be important in the recovery or restoration of marsh areas where snails are causing a large reduction in cordgrass biomass.

The one thing we still don’t know with certainty – how do the snails determine which plant is taller??

I guess that’s the beauty of this job, in that there are always more questions to answer.

The new documentary, In the Grass, On the Reef: Testing the Ecology of Fear had a segment on the snail experiment.  Watch the full program here.  You can also read Randall’s post from the beginning of the experiment, and watch a video, here.

[…] resistance genes would be present, and so the marsh is likelier to survive.  As Randall’s snail experiment showed, a diversity of different species at a single site can be beneficial as well.  Looking at the […]