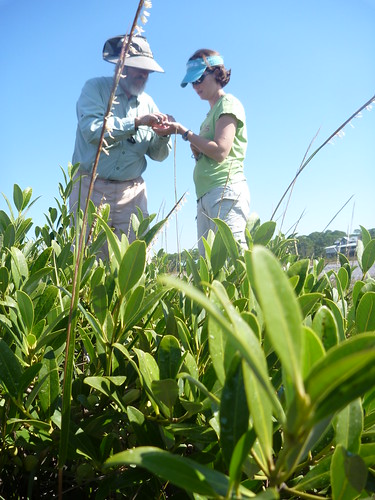 Ed Proffitt with Randall Hughes. If global climate trends continue, mangroves may start to overtake the salt marsh ecosystem along the Gulf coast. What will these new habitats look like?

A few weeks ago, Dr. Ed Proffitt from Florida Atlantic University visited FSUCML to give a seminar here and on campus. Ed and I have collaborated on several proposals, so we used the visit as an opportunity to get out in the field and toss around some new ideas.

Ed has done some really interesting work on the interactions between mangroves and salt marsh plants in Tampa Bay and the Indian River Lagoon, and he wanted to see some mangroves in this area. I recalled having seen a few young red mangroves last year at some of our sites, but none of them survived this past winter (which is why we generally don’t find them around here – they can’t withstand the cold temperatures that we get every few years). However, black mangroves do extend into this portion of the Gulf, and I knew of a place where we may find one or two small ones to look at. 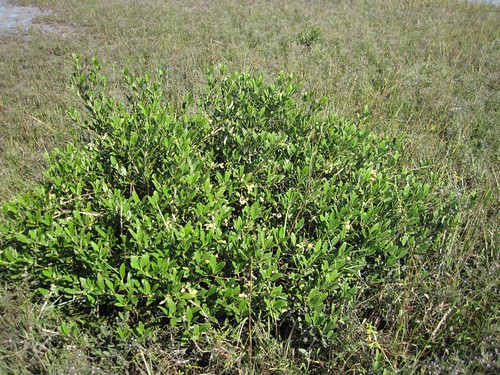 To my surprise, we found a lot more than one or two! And although they are small (think small shrub, rather than tree), some of them, such as the one shown here, had aerial roots extending out 14-15m, suggesting that they have been around at least 5-10 years (by our best guess). 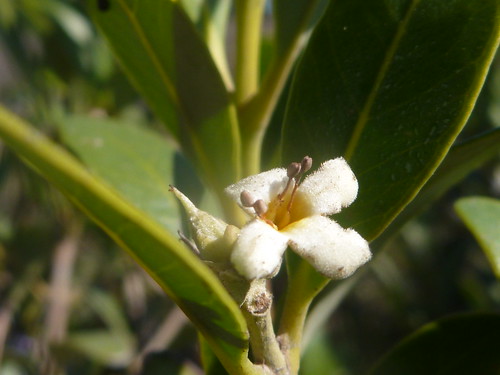 Avicennia flower. These mangroves are insect-pollinated, and we saw lots of bees buzzing around. 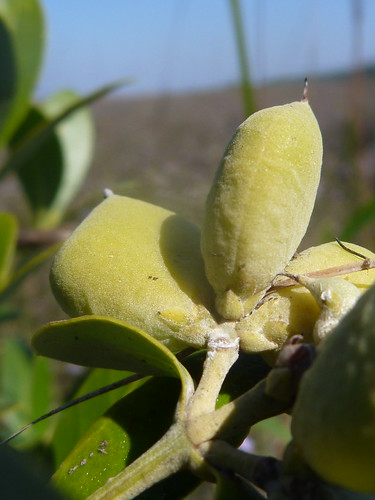 Also, most of the larger ones had both flowers and propagules (seedlings that are retained on the tree) on them. 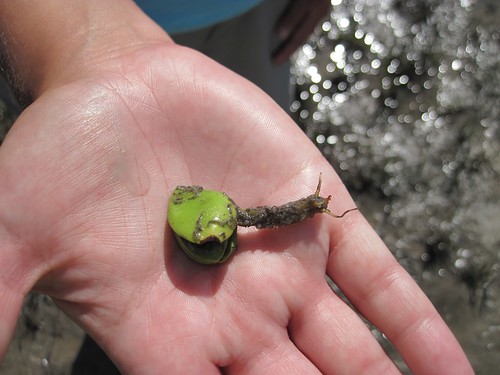 Avicennia propagule that has dropped to the ground and started to take root.

As we looked around, we noticed more and more small mangroves in the marsh – probably the seedlings from some of the nearby larger trees – and we even found some of this year’s propagules that were starting to root in the sediment.

As I mentioned, black mangroves are known to grow in the Panhandle and west into Louisiana and Texas, so it really isn’t that surprising that we found them in St. Joe Bay. What is surprising, at least to me, is that they are as abundant as they are in a site where I previously thought there were only a few. Where else may they be in the bay? And are they increasing in abundance each year? What impact do they have on the marsh plants and animals? The questions abound. With our curiosity and Ed’s insight and experience, we are now starting to pursue the answers.

We appreciate your input!  You can leave your comment below.

[…] Read about Randall’s collaboration with Ed. […]