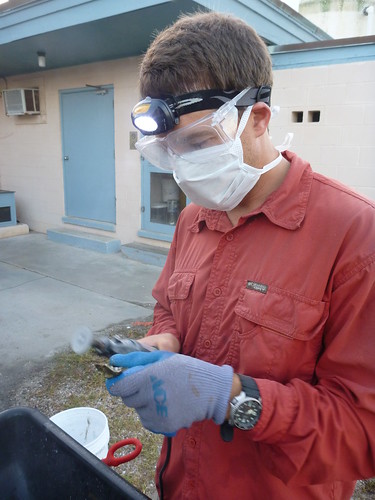 When not losing sleep over whether the tile experiment will work, David dreams of making the tiles. They'll be back in six weeks to check on the progress of the baby oysters they set upon the reefs.

Walking down the hall of our dorm at 7 AM, I heard the familiar sound of the dremel from across the street in the lab area.  This time the whole crew was there- Tanya, Hanna, and Cristina cleaning and separating oysters and David Kimbro slicing shells into similarly sized pieces.  The Jacksonville oysters they’re processing have an entirely different kind of predator than the Marineland oysters have in crown conchs.  The Jax shells were speckled with little greenish spots- these are boring sponges.  They bore holes through the shell and take up residence within it.  The specks were making it harder to spot spat.

I was thinking about predators when I was driving today, in particular the crown conchs here.  A1A runs alongside the intercoastal waterway where the oyster reefs are.  Driving north towards the Matanzas Inlet, which is the northern boundary of the crown conch problem, there is a bridge under construction.  While getting some footage of oyster reefs earlier, I noticed how close many of the reefs are to the road and its runoff.  Overall, the area is more heavily settled than the Forgotten Coast sites where David and Randall do their studies.  This drive I took today put a slightly different light on the work they do.  When I’m shooting on the reefs, or in the salt marshes, it sometimes seem like a different world.  But it isn’t, really.  Not that this sudden and very focused problem may not have an entirely natural cause.  But there are a lot of potential factors in play outside of trophic cascades and water salinity. 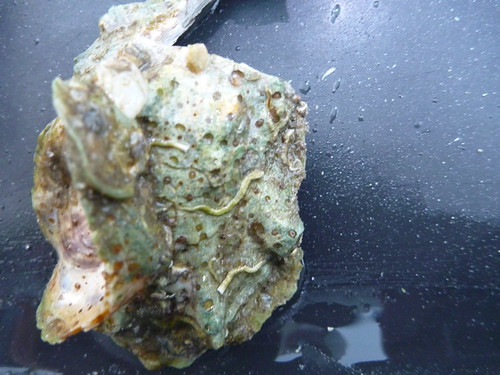 Those innocuous looking spots are trying to kill the oyster and take over its shell.

2:00 PM– Hanna, and Cristina drove to Jacksonville to deploy nets at low tide.  Cristina found a deep spot in the mud and sank in waist deep, which is a concern at this site.  The new boat was purchased specifically for this site, as it’s a long kayak trip in somewhat treacherous waters. 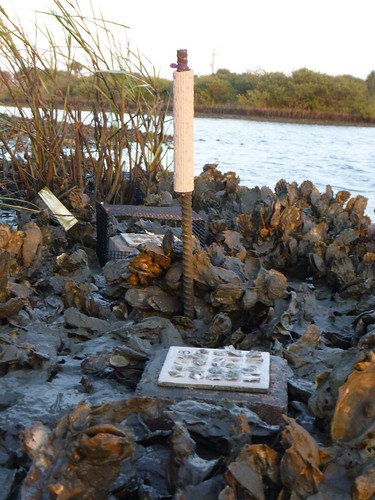 So far, so good for the Saint Augustine spat tiles.

4:30 PM– David and Tanya finish making the Jacksonville tiles and spend about two hours cleaning up the lab space.  Tanya kayaked out to check on the St. Augustine tiles they deployed yesterday before heading to Jax.  David said he had lost sleep last night over whether the tiles would still be there, or if the glue would even hold the spat onto the tile.  Jon Grabowski (NC team leader) has a site with easy public access.  This morning he showed up to find his sites being harvested, the tiles already removed.  So you can see where David would worry.  But, at least over the first night, the SA tiles were fine.

David and Tanya joined the rest of the team in Jacksonville for another awesome Tanya-cooked meal.  I feel I did her a disservice yesterday by not mentioning the zucchini bread and double chocolate biscotti she made, so I’ll do so now.  Yum!  Perhaps On the Reef needs a cooking segment.  Everyone is now settled into a house they all think is haunted.  Hanna put together a makeshift tub on their screened-in porch to keep the spat alive to deploy tomorrow.  One more day to go… 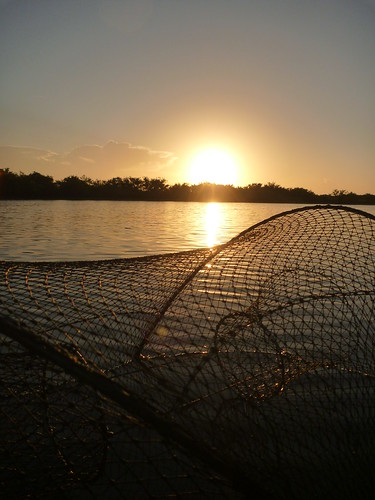 On Thursday, the October oyster push concludes and the FL, GA/ SC, and NC teams will start looking at the data and continue establishing patterns.

I’ve found this past week ON THE REEF with Hannah, Cristina, Tanya, Rob, and David absolutely fascinating. Thank you so much for the blog.

We agree with Mary that it has been great to follow the teams day by day. keep up the great series.