Since they’ve deployed their experimental cages in Apalachicola Bay, David Kimbro’s crew has had some go missing, while others have been found in this condition.  Missing buoys make potentially unharmed cages nearly impossible to find.  Until just yesterday, there have been no leads as to the identities of possible culprits. 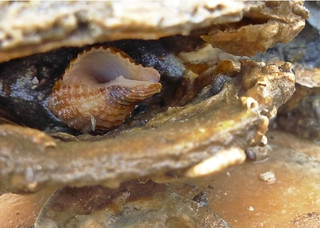 Shark week? In Apalachicola Bay, oyster drills like this one are the animals that have inflicted the most damage.

I’ll eventually get to how our research on Apalachicola Bay oysters ties into shark week. But first, let me tell you about my history with the annual Shark Week, which is put on by the Discovery Channel. Growing up as a surfer in North Carolina, the best time to surf was in the late summer and early fall. After many warm months of zero waves in the spring and summer, we lived for tropical storms that would make their way into the south east….but not get too close. I hated those suckers that got too close, because fun waves would quickly turn into pigs being on the roof and lots of misfortune for my fellow North Carolinians.

Getting to the point, every August, I was barraged by the Discovery Channel with interesting stories about sharks. Cool… but as soon as the waves start coming up, I’d have all of these thoughts about sharks circling through my head. In fact, in the line-up the next morning, it was looked down upon to talk about the previous evening’s episode of Shark Week. Now, sharks are awesome and they are critical to the health of our marine environments, but I don’t like to think about them when I’m waiting for a wave.

Okay, enter our research on Apalachicola Bay’s oyster reefs. It has been a very wet summer and the waters are very murky… you can’t see squat under water. But that doesn’t deter us, because we have been full throttle this past year and especially this summer on the monitoring and experiments.

Disclaimer: the pronoun we = Nikkie and Hanna, who have to do all the diving and data collection. To be honest, I couldn’t have asked for a better graduate student and employee to lead this research project. Nikkie with crown conch (and egg casing), found in Apalachicola Bay.  Surveys have found that while southern oyster drills have thrived on commercially harvested reefs on the floor of the bay, conchs have been more numerous on fringe reefs.

Now, another disclaimer is that Nikkie DISLIKES not being able to see under water. So, for all of the sites that I can’t free dive to collect the data (my scientific diver certification expired…next on the to-do list to fix), I would serve as shark/alligator bait by swimming on the surface of the water for 1/2 hour while others collected data below.

To be honest, I’ve skewered Nikkie about her fear and about needing me to serve as bait. BUT… then I got an email today from the crew, which happens to be the first mission since I departed from Florida for Massachussettes. This week, my lab is undergoing a Herculean effort to set up another experiment. In doing so today, they solved mystery of who/what has messed with all of our previous experiments and they simultaneously confirmed Nikkie’s fear. These experiments are protected by welded cages and marked with buoys, which have frequently and unfortunately gone missing. This is bad for our research funds, our time and for the data we need to understand Apalachicola and its oyster reefs.

So, in the spirit of the board game Clue...who dunna it? Freaking sharks. Given Nikkie’s significant fear and my discounting of that fear, I sure felt bad getting this message from Hanna and Nikkie today. But hey, that’s what team Kimbro does for Apalachicola oysters!

(Edit 8/11/13.  FSU Coastal and Marine Lab’s Dr. Dean Grubbs IDs it as a bull shark.  Read more on this fact sheet from NOAA, from which we leave you with this quote: “Bull sharks are one of the three top sharks implicated in unprovoked fatal attacks throughout the world.”– Rob) See more posts and videos on the Apalachicola oyster crisis and this research.