I went to graduate school in northern California. Locals along the coast of NorCal used to refer to the month of October as Roctober because it was the most beautiful time of the year.  Well, I think the Forgotten Coast should also be privy to this monthly description because things have been beautiful around here this month.  Looking at the oyster reefs, I get the sense that things are really starting to get busy in there.  But I wonder if the ecology on oyster reefs in NC is starting to slow down.  Where are predators really having a big effect? We shall soon see.

For the past week, we have been trying to figure out how to do a lot of ambitious seeing and learning on all of our reefs.  All three teams (i.e., NC, SC/GA, and FL) need to not only sample fish and invertebrate predators on reefs (for the second time and in the dark…all because of the timing of tides in the autumn), but each team also needs to simultaneously squeeze in an experiment.  Oh, I just remembered that we also need to pay attention to other things that can explain oyster patterns: oyster food in the water (phytoplankton), water temperature, tides, and sediment properties.  So, add those to our to-do list as well!

Because this will be a ton of work to do in a short amount of time, we are sending a new crew member of the Florida team (Alicia Brown) up to help out the South Carolina/GA team.  We are going to send her up with a video camera, so it will be fun to get a glimpse into their lives over the next week. 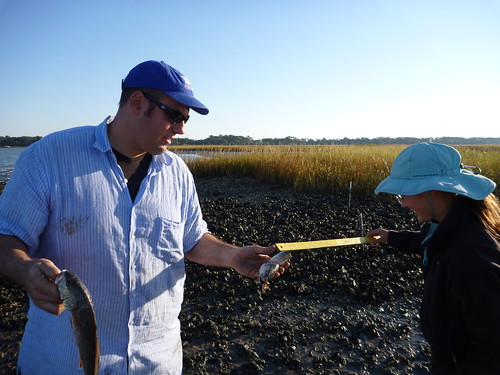 Jon Grabowski holds up a fish for Tanya to measure. David was Jon's lab tech at UNC.

In addition, one of the leaders from North Carolina (Jon Grabowski) has been down with us in Florida for the past week to help make sure that all three teams are doing the same thing.  While he was here, we also worked with a wonderful assistant up in Georgia (Caitlin Yeager) to figure out how to manufacture our experimental products.  The first part of this experimental puzzle involved figuring out how to remove baby oysters (spat) from oyster clumps in the field and to attach them to a standardized surface (tile).  Across all of our sites, we all want to start out with oysters of roughly the same size and age; otherwise, differences in our experiments among sites could simply be due to differences in starting oyster size or density, rather than to differences in predator diversity etc.   After we get all the spat attached to our tiles, we then built (well Tanya built most of them- thanks Tanya!) structures to put around our tiles, or not… 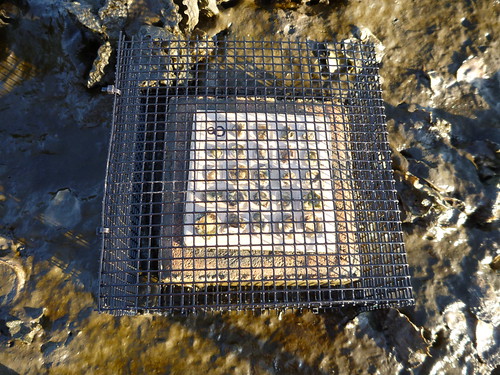 Our first structure was built to exclude all predators from munching on our oysters (i.e., predator cage).  Our second structure was a modified exclosure that mimics physical characteristics of the exclosure, but still allows predators to munch oysters (cage-control).  Finally, we have naked tiles that receive no structure or cage.  At 2 sites in NC, 2 in Georgia, and 3 in Florida), we will put each of these ‘treatments’ on all of the reefs (15 tiles/estuary or 105 tiles total).

But why do this crazy experiment thing?  Well, we will come back each month and monitor the traits of oysters and their survivorship.  With these results, we will compare survivorship or oyster traits from cages to that of the naked tile (“control”) to see if excluding predators improved oyster survivorship.  But because any improvement of oyster survivorship by the cage could simply be due to the physical structure (not to predator absence) providing shade during low tide or somehow changing flow (and food delivery), we will then compare cage results to that of the cage-control; now we can tell just how important predators are.

Another cool thing about the cages is that it may exclude predators from eating oysters, but they will not prevent predators from affecting traits of the oysters through intimidation.  So, do the traits of oysters surrounded by cages in Florida (maybe more oyster consumers) differ when compared to caged oysters in NC (maybe fewer oyster consumers).   Or, perhaps it’s that FL has more oyster food this time of year than NC and that better explains trait differences in oysters, not predators.  Or, maybe larger fish predators in Florida means less oyster consumers and less influence of oyster predation in Florida compared to NC, where there may be fewer large fish predators to eat the smaller crabs that love to munch on oysters.

To pull off this extra work, my Florida team will divide and conquer over the next week and a half.  Out of a team of four, 2 people will trap and gill net while the other two folks will set up the experiment.   This will involve ½ the team moving a head of the other team members at certain points.  But we’ll all overlap at each site for at least a few hours, which will then result in interesting stories about what each team has been observing.  Because we want to share this circus show with you over the next week, we’ll post updates every day.  We hope that this gives you a feel of what it’s like to get all of this done (both the good and the bad!).

Well, I need to go stockpile some sleep.

We are celebrating “Roctober” at a festival in Stonington, CT today!

I use coated wire cages like yours (1″ x 1/2″) while purging clams and have watched spider crabs, excluded from the clams by a cage, reach through the holes with their skinny claws and crush clams from outside the cages, and eat the clams by pulling the meat through the cage. If you find your caged oysters munched, I would suspect over-reaching spider crabs. You may have to use smaller mesh to exclude their claws.

[…] sampling and down load instrumentation) as well as to check on the tile experiment that began 6 weeks ago. Props again to Tanya for getting us organized to go! Although, I have some anxiety about what […]

[…] of shell containing oyster spat (baby oysters) from clumps so that he could glue them onto tiles, as he described in Friday’s post.  I got a good look at what spat actually was.  You can see it in the photo here, basically a […]

[…] is a time series from our first spat tile experiment, which you can read about in this post. As you may recall, this experiment was largely a failure because the adhesive we used to adhere […]