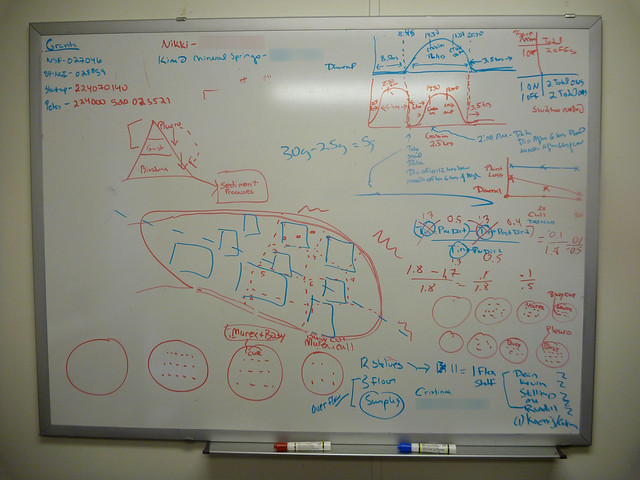 After a cold, wet field day in St. Joe Bay with Randall Hughes and her crew, I stopped by the FSU Coastal and Marine Lab to hose off and return some waders they had lent us.  While there I decided to stop and say hi to David Kimbro and saw this dry erase board on his wall.  For some reason, it made me think of the first post I wrote for this blog.  In that post, and in a good majority of our posts and videos since, we showed and talked about the down and dirty side of science- field work in muddy places.  Early morning kayaking, pulling half-eaten fish out of gill nets, vacuuming bugs out of cordgrass– it makes for good video.

But that isn’t all of it, of course.  I said in that first post that science isn’t all test tubes and lab coats.  But lo and behold, Randall and David do have labs where their samples are processed, and they do have lab equipment and run experiments in controlled environments.  We have shown some of that as well.  And there is quite a bit of work they do at desks on computers, on paper, or up on their dry-erase boards.  I haven’t shot and edited that video yet.  But it’s worth some examination. 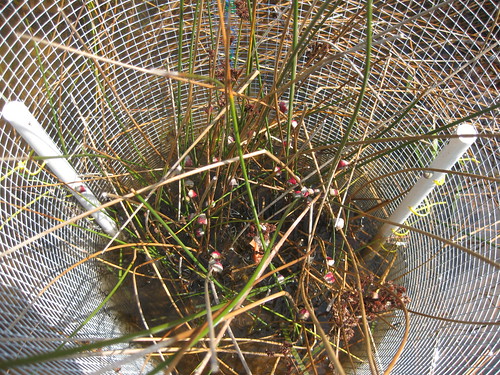 This experiment measured the impact of periwinkle snails on the grasses they climb. Some cages had cordgrass, some (like this one) had needlerush, and others had a combination of the two. Control cages had grass with no snails.

Moving clockwise from the upper right of that board you have a diagram showing tides at Baymouth Bar, for a project we’ll be covering sometime soon.  There are also some equations that David and Tanya have been working on.  The speckled circles represent different cages or tanks for an experiment in the process of being planned.  Randall and David often conduct experiments where multiple tubs and cages have variations of different factors (i.e. some have short grass, some have long grass, some have a combination of grasses, etc.  The snail experiment is a good example).  The oval with the squares in it represents Baymouth Bar, split into regions.  The triangle is a rough sketch of a food web, and the numbers in the upper left are grant numbers.

David said he’s afraid to erase anything on the board, even though he snapped a photo of it (and I’ve now immortalized it online).  These are ideas waiting to be actualized.  The little circles will become tubs full of predatory snails.  Activities planned for low and high tide will be carried out, and theories tested.  And so, like cutting crabs out of a shark’s belly, or counting how much grass is in a quadrat, this is science.

David and Randall’s research is funded by the National Science Foundation.

[…] this end, David and his inseparable drawing board (check out how David planned this project) spent many hours together until… Eureka! Nine plots would be the solution so that we could […]