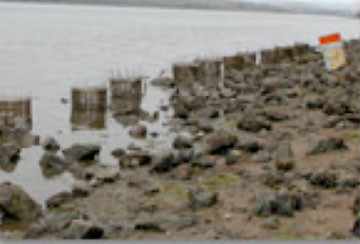 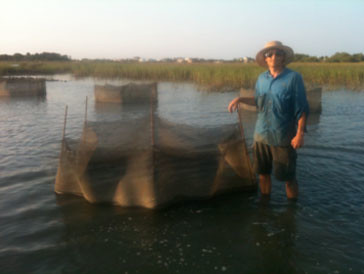 While we had planned to install only 18 of these cages along the Atlantic coast of Florida, my crew wound up installing 70 cages over about six weeks. How did we reach such inflation in the number of cages and amount of digging? Well, it mainly stemmed from my ignorance of this area and the St. Johns River, which happens to dump a lot of sediment around oyster reefs. Because this sediment is deep and flocculent, it’s dangerous and almost impossible to work in. In fact, I may design a new study to analyze how oyster reefs manage to keep themselves above this ever-growing mud pit. I digress.

Relative to the abundance of these un-workable oyster reefs, mudflat areas suitable for our new experiment (i.e., near oyster reefs and firm footing) are quite rare. It was our luck (for better or worse, as you will soon read), we stumbled upon a sufficiently and suitable mudflat north of Jacksonville. After three days of hard digging, we managed to create large cages ready to support our experimental treatments. Suspecting that this site seemed too good to be true, we left the cages to fend for themselves for a week. If we returned to discover no problems, then we would proceed with the experiment.

On to St. Augustine- fitting the theme of bigger not always being better, our gargantuan stone crabs burrowed out of cages we had installed there. Even worse, cages without stone crabs were coming out of the ground because they were not dug in deep enough. The stone crab problem represents another example of why I should always run pilot experiments before attempting anything ambitious. Unfortunately, I have not learned this lesson yet. Or, I seem to periodically forget it.

Because I lacked the time to run such a pilot experiment, I ditched the troublesome stone crabs. We then awoke at dawn for the next three days to re-install cages (see the video below) in an over-kill sort of way. For this task, we took digging deep to a whole new level. Nothing was going to get inside or out of these cages without our permission. You can see how much deeper the cage bottoms extended into the ground by looking at the same cage pre- and post- renovation.

Having weathered the St. Augustine mishaps, we confidently headed back to Jacksonville to assess those cages. Upon arrival, I was subjected to a horrific scene: three days of hard labor undone by high flow conditions.

Note to self: mudflats are firm because flow is too high to allow sediment accumulation.

Stubbornly, I decided to force my will upon Mother Nature by digging cages in deeper and reinstalling them at locations behind marshes that would presumably buffer flow. Lacking the time to test this new cage installation, we immediately installed experimental treatments. This leap of faith was necessary in order to stay on schedule with the NC and GA teams.

Okay- cages up, reefs in, bells and whistles turned on. Afterwards, I raced back across the state to help two interns on their projects. Halfway back across the state and late on the Friday of Memorial Day weekend, I managed to blow the old lab truck’s transmission. As if getting a tow truck to Lake City at midnight wasn’t hard enough, getting one that would tow our truck and our kayak trailer was highly unlikely. But, taking pity on us, a wonderfully nice tow-truck driver agreed to load the trailer onto our truck. Meanwhile, team Georgia was also experiencing problems with flow, sedimentation, and misbehaving predators. In short, we were throwing everything at this experiment and making little progress. At this point, ironically, the relative slackers amongst the three teams- the slow-to-start NC team- moved into first place- the horror!

After the passing of one mercifully tranquil week, we headed back to St. Augustine to check on things and collect data on our tile experiment. Interestingly, the experiment was working and we observed some variation in how predators indirectly benefit oysters; the positive effect diminished with latitude.

But then back again to Jacksonville- destroyed cages followed by some extremely colorful language. There should not have been deep pools of water surrounding the cages at dead low tide. 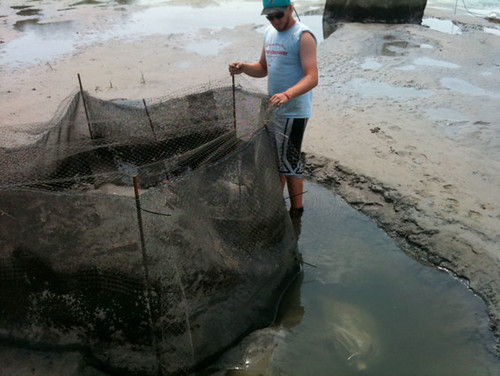 Obviously, it was time to cut our losses by not messing around with this site anymore. As a result, we spent the next three days searching all of northern Florida and southern Georgia to find a new ideal study site: suitable to oysters, no quick sand, firm footing and modest flow. After three days of intensive searching, we can confidently claim that such a site does not exist.

After accepting that this experiment could not be conducted in northernmost Florida, we decided to redirect Jacksonville resources to St. Augustine. There we would conduct a similar experiment that focused on a predatory assemblage unique to Florida: stone crab, toadfish, catfish, and crown conchs. So, nine more cages, nine more experimental reefs, and all the associated bells and whistles were established once again. By this time, my crew felt that they could easily serve in the Army Corps of Engineers.

Although things are now going well and we have a much better understanding of how to initiate this type of an experiment, my general ignorance has kept a Florida State University intern in St. Augustine for 7 weeks after agreeing to be there for only two weeks. Ooopsie!

Stay tuned in for a Hanna update on St. Augustine’s crown conchs and a post from Tanya about the summer madness from a technician’s perspective.

To quote a Jimmy Buffett line, “that that doesn’t kill you makes you strong!” Amazing perserverence and sense of humor. Wishing you luck for the next episode.

[…] telling you about an extensive field experiment being conducted for the biogeographic oyster study. As David posted earlier, it was a complex undertaking that took a lot of hard work- long hours and physical labor- to get up […]

[…] to methods described in David and Tanya’s posts, the construction of my experiment consisted of (much smaller) trenches dug for […]