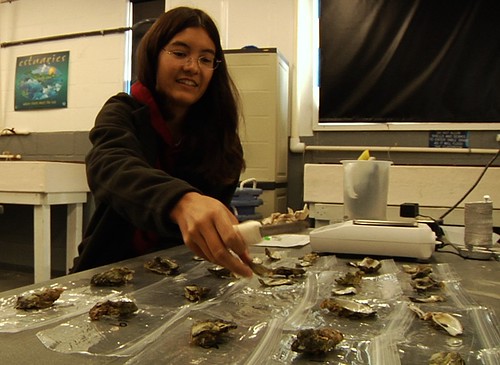 Although the oyster project’s fieldwork has attracted most of the attention on this blog (indeed, it is where most of the action happens), our time at the lab deserves a bit of discussion as well, as much progress on the oyster project also happens behind walls. This is especially the case nowadays, in the winter, when fieldwork is kept to a minimum on account of weather and the general inactivity of animals on the reefs. What better time to catch up on processing the zillions of samples we’d collected over the past many months, but never quite had time to get to.

Labwork is a whole different beast than the energetically-demanding, volatile nature of fieldwork – I wouldn’t go so far as to call labwork boring, but it is often incredibly repetitive, time-consuming, and demanding of extreme patience. It’s certainly not as exciting, sensational, or enjoyable as fieldwork (in my opinion), but it is just as much an integral part of the science, and anyone who goes into research will probably spend much of their time sitting at a bench, repeating the same procedure twenty-thousand times in pursuit of the great dataset (that is, until you hire techs and grad students to do it for you). Yet labwork has an appeal and mystique all of its own that’s not to be overlooked. 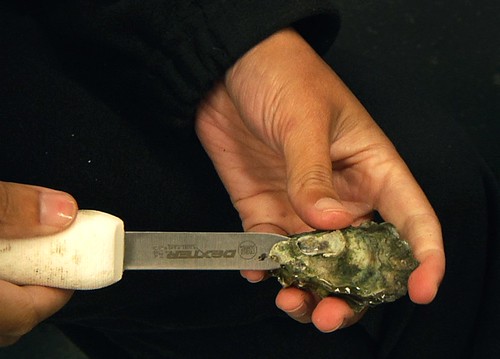 So while David retires to his office and catches up on the uncountable tasks at hand there, I’ve holed up in the lab and plodded steadily through the several hundred samples of ours waiting patiently in the freezer. Lately, this has involved two major tasks. The first was to process the sediment organic matter (SOM) samples from our (and Jeb Byers’s) oyster reefs collected every 6 weeks since August. A total of 640 samples needed to be transferred from bags to aluminum dishes, dried for 3 hours at 105°C to evaporate any water, weighed, combusted for 3 hours at 525°C to incinerate and volatilize any organic material, and reweighed to determine the percent of the sediment composed of organic material. This analysis will allow us to compare how oysters affect the amount of organic material in the sediment across latitude. In case you ever wanted to know, 525°C (977°F) is pretty dang hot, and the smell of burning sediment that wafts down the hall during the first half hour or so in the furnace apparently smells exactly like an electrical fire. 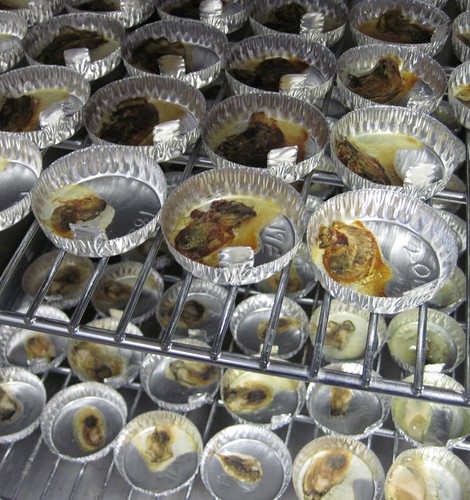 My second task was to process samples of oysters we’d collected from our reefs during our intensive August surveys. After thawing them out, this involved measuring the total weight, wet and dry tissue weight, and various shell dimensions of 400 individual oysters. From these data we’ll be able to calculate an oyster condition index (health indicator), which we’ll be able to compare across sites. Obtaining wet and dry tissue mass required removing and weighing the meat (my oyster shucking skills increased greatly after this exercise), and reweighing it after drying for 48 hours at 70°C (this generated some quite odorous and not-all-too-appetizing looking oyster jerky). Between the sediment and oyster samples, I admit I had a monopoly of the marine lab’s drying ovens for a short while. I can say though that sticking your face in a drying oven is a great way to warm up on a cold winter’s day.

There are a variety of ways researchers try to liven up the tedious nature of labwork. Many listen to music or books on tape, or play movies in the background, or chat with labmates if others are around. Sometimes I’ll do these things, but other times I find the quiet monotony of labwork to be rather peaceful. There’s no stress or distractions or real need for thinking – just you, the calipers, the oysters, the datasheet. You kind of get in “the mode” and it can be rather, I don’t know… zen? At least for a little while. It’s a nice contrast to the intensive and unpredictable nature of science in the field.

“Oh, knowledge exploring is oh so lyrical, when you think thoughts that are empirical.”