See David and his crew in action, and see what animals are on Alligator Harbor reefs.

The title of this blog (a sports metaphor) is how my teacher first introduced me to marine ecology. For our oyster project, this essentially means that we need to establish who is on the oyster reefs before we can begin to make connections among predators, oysters, and their water filtration services….as well as (unfortunately) the impacts of oil.

So far, we’ve identified the organisms on the bottom rung of our food web (think of it has a pyramid): oysters, clams, amphipods, and polychaetes on the bottom rung of the food web and mud crabs and snapping shrimp on the next higher rung of the food web. Our goal this week was to begin quantifying who is at the top of this food pyramid. To do this, we deployed crab traps, bait-fish pots, and gill nets onto each of our reefs during low tide. Following the ensuing flood tide, we returned the next day to count our catch and then promptly release everyone. 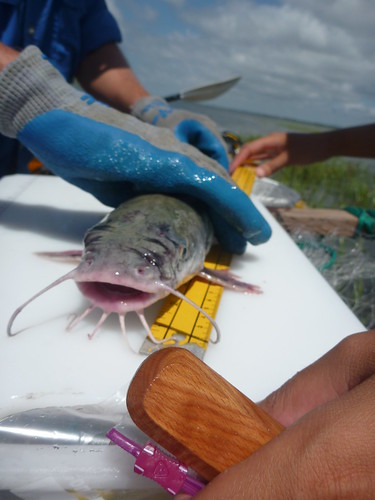 Although we caught a couple of interesting things (e.g., adult stone crabs, mullet, spot, as well as juvenile pinfish, pigfish and silver perch), I was surprised by the low abundance and diversity of our catch and that the most abundant species was catfish!

But after running out of fresh water to drink and profusely perspiring all the moisture out of my body while out on the reefs, it dawned on me that nature of this catch is likely an interesting seasonal pattern (again, I’m new here!): only hardy organisms that can tolerate really hot and low oxygen waters are going to be on Florida reefs right now. Once the rest of this research team begins collecting similar data from Virginia to Florida, it will be interesting to see if these low abundance-diversity patterns might last longer in some areas (e.g., Florida with longer summer) than in others (e.g., NC with shorter summer). If that’s the case, then the cascading effects of higher order predators (things at the top of our food web) down to oysters and their water filtration services may be occur more consistently during the summer in northern than in southern estuaries.

Hmmm…..good thing we are conducting a relatively long-term study and will consistently repeat this sampling in the future to rigorously detect interesting patterns like this one.

The Music in the video was by Jim Crozier.  As always, we welcome submissions from local musicians. WFSU’s kayak was provided by Wilderness Way.

Interesting results – particularly with the catfish. I wonder though, if you used a more active technique for collecting the predators – like trawling the bottom around the reefs – if you would get similar results? Anyway, I really enjoy this blog.

[…] it’s a fully grown pinfish. If you set minnow traps in an oyster reef (like David Kimbro in this video) or dragged a net by a salt marsh (like Jack Rudloe does here), you can see where pinfish spend […]