Art is something I’ve always loved almost as much as biology. If I hadn’t been a biology major in college, I probably would have been an art major, and it is the fusion of the two that I like in particular: the realistic artwork of plants, animals, other living creatures, and their environments. There is something I especially enjoy about drawing plants and animals, because to draw them accurately, you have to look at them with a closeness and a consideration beyond the everyday. You notice the forms and structures and beautifully intricate details you would have never seen otherwise. I find that you see the organism in a new light, with a new appreciation, understanding, and respect.

It wasn’t until a couple years ago that I discovered the field of scientific illustration – that this  marriage between biology and art was in fact an entire line of work. Artwork of biological organisms is used for a variety of purposes, including field guides, identification keys, scientific papers, descriptions of new species, textbooks, educational displays, brochures, and posters. A number of people work as full or part time scientific illustrators, often for museums or publishers, or as free lancers. Beyond the fine arts, it appears there’s a market for the exact types of drawings I’ve always loved to create. You may wonder why scientific illustrations are still important today given the ubiquity of photography. It is mainly because there are limitations to what photographs can depict clearly. With illustrations, important details can be captured and highlighted, the background and unimportant details omitted, photographic artifacts eliminated (like obscuring highlights and shadows), and the organism best positioned to convey its important features in a way that is easily interpreted. Interactions, behaviors, and assemblages can be depicted that would be difficult or impossible to capture on film. Fossil and other extinct plants and animals can be portrayed as they would look in real life. Illustrations are also very useful for schematics and diagrams, and are very commonly used to depict medical procedures.

Scientific illustration differs from other forms of art in that accuracy is imperative, but aesthetics are also of consideration. Composition is important, as is skillful use of the artistic medium and the portrayal of three-dimensional form, light, shadow, and depth. Great illustrations should look both realistic and visually appealing, capture the right amount of detail, and perform well the interpretive function for which they were created. The medium itself can range widely depending on how the illustration is to be used. Pen and ink, colored pencil, watercolor, and other traditional media are common, and digital artwork is increasingly common today. Last summer I decided to attend the annual conference of the Guild of Natural Science Illustrators held that year in Olympia, Washington. It was a fabulous conference where I met many phenomenal scientific illustrators, all far better artists than me, and all wonderful and friendly people with a common love of both science and art. The talks, workshops, and field trips at the conference, like the interests of the attendees, were a mixture of art and biology, encompassing everything from techniques (like how to draw fish scales accurately) to interesting local natural history (like research on crows’ ability to recognize human faces). I picked up many new techniques and ideas to take back with me and try. Having previously attended college in Washington state, it was also wonderful to return to the beautiful Pacific Northwest for a week.

Ultimately, I plan to go into biology rather than illustration as my primary career, but I hope that illustration might be a fulfilling side venture. I hope you enjoy the illustrations of mine I’ve included in this post, which are all of species found in Florida.

For more information on scientific illustration, visit the Guild of Natural Science Illustrators webpage, or Science-Art.com, where you can peruse the work of many of its members. There are also a number of blogs on science and art, such as this one, which has links to several other blogs on its homepage. 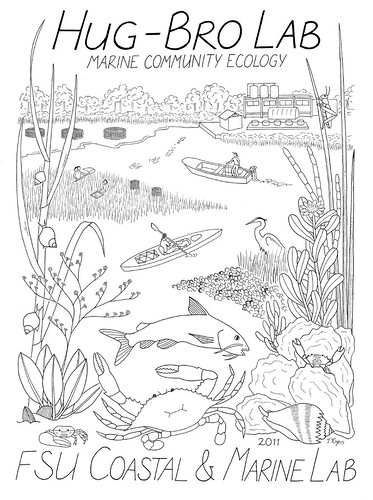 Green sea turtle – not actually an illustration, this is a sand sculpture I made on a beach (one of my more bizarre artistic hobbies)

That is cool that you are studying oysters. And you love the confluence of natural history and art.

Maybe we should make an ecosystem poster for you to tell the story of oysters and acidification, other challenges they face?

PS: Sontag said paintings construct, photographs disclose. Not sure what that means exactly but it sounds about right. I believe there is a large part of us still firmly rooted in the 19th century. So art you are making is a relief, a salve for the wounds that techne inspires.