As Dr. David Kimbro’s research assistant, I help out with all aspects of the biogeographic oyster project in the field and at the lab. David, myself, and Evan Pettis (an intern from FSU) have returned from our big sampling effort to characterize the predator community on the oyster reefs at our chosen field sites. Over the course of a productive yet exhausting week, we successfully deployed and retrieved nets and traps at Alligator Harbor, Cedar Key, and St. Augustine and found very interesting differences in the abundance and diversity of fish species between sites. St. Augustine had by far the greatest diversity of large fish species, including redfish, snapper, toadfish, flounder, jack, ladyfish, bluefish, and menhaden. At Cedar Key and Alligator Harbor we caught longnose gar, a fascinating and very ancient fish with extremely hard scales and a long toothy snout. The largest fish we encountered were black drum, which we only captured at Cedar Key. Pinfish, hardhead catfish, and striped mullet were present at all of our sites, although in varying abundances. 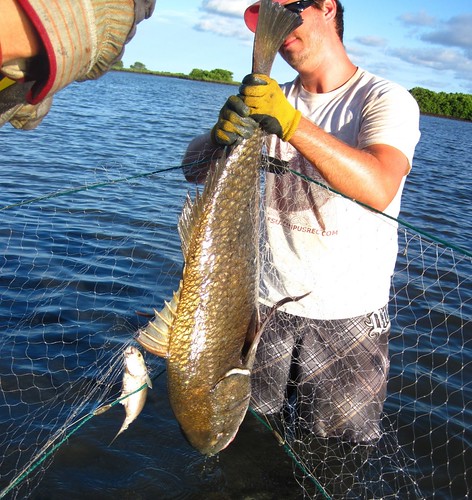 Evan holds up a black drum captured at Cedar Key

The other research teams farther north have just completed their sampling as well, and also have interesting results to report. One team caught nothing but meter-long sharks at one location, and another team caught 90 pinfish in their traps at one site. Once all the data are entered and compiled it will be interesting to look for patterns, and then to see how the fish communities change throughout the year.

Although the weather cooperated, our time in the field was not without setbacks of course. We discovered that two of our reefs at Cedar Key had been demolished, most likely by wayward boaters running aground, and had to select new locations. We also caught absolutely nothing in any of our crab traps, so we’ll have to reevaluate our trap usage. In Jacksonville, we weren’t able to complete our sampling as planned because the reefs we’d intended to use proved inaccessibly barricaded at low tide by an expanse waist-deep mud. Subsequently, we spent our time in Jacksonville searching for new reefs.

Local knowledge proved invaluable when trying to find suitable oyster reefs near Jacksonville. We talked to an old-timer oysterman very familiar with the oyster beds on the east coast of Florida. He was also, much to our amusement, mystified by David’s Camelbak hydration system. We spoke with rangers from the National Park Service, who had noticed, like the oysterman, large oyster die-offs within the last decade or two. We also consulted with some charismatic kayak guides, who knew all too well the difficulties of traversing the area’s deep mud. They informed us of a person who recently died after getting stuck in chest-deep mud. Suffice it to say, this made us increasingly wary of the stuff. After many miles of kayaking, we did eventually locate some accessible new reefs, but we’ll have to wait until next time to mark and sample them.

Between kayaking to our reefs 2-3 times a day, getting little sleep, as well as constantly packing, unpacking, hauling, rinsing, and trying to keep track of our seemingly endless assortment of equipment, we were all in much need of rest. We’ve now had a week to regroup and prepare for our next sampling effort, which will examine characteristics of the oysters themselves and the smaller critters that live among them. 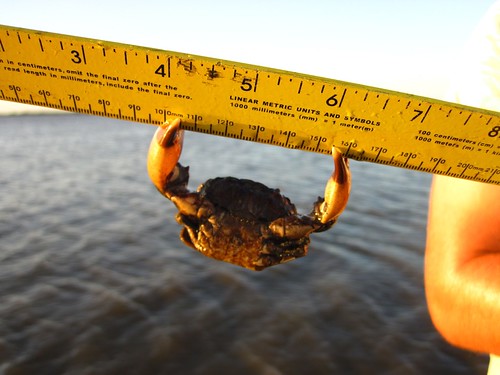 […] my assistant Tanya eloquently wrote in our last post, our July efforts produced interesting data on the predatory fish and crabs that hang around oyster […]

[…] the reefs had just plain failed (Tanya recounted finding two of the Cedar Key reefs obliterated in her last post). Scientific equipment being used in an entirely lawful way. This machine filters the sediment […]