We have some photos from the event, and you can see the turnout was good.  The SAIL Bluegrass Ensemble played in the garden.  It never ceases to amaze me how many young people in Tallahassee not only get into bluegrass but put on a good show.  Inside, there were some artful cards made by LeMoyne students that could be obtained by donating, and which were intended to be sent to legislators so that people could express their concerns over offshore drilling in Florida.  And then of course there was the art.  Allison Jackson’s oil paintings were featured in our previous post.  They depict scenes along the Forgotten Coast, or scenes featuring animals of the Forgotten Coast.  Patrick Lane had some mixed media pieces, some of which are featured in the slideshow below.  Their artwork will be sold and the proceeds split between LeMoyne Center for Visual Arts and two organizations, both of whom were present on Friday.

Florida Wild Mammal Association rescues and rehabilitates injured wild animals in Wakulla and Franklin Counties.  Despite their name, about 60% of the animals they treat are actually birds.  They provided the pieces in front of LeMoyne during the opening: representations of a bear, a deer, and four geese.  In addition to rescuing animals, they educate the public on wildlife issues.

Crude Awakening Tallahassee is an organization that advocates a permanent end to offshore oil drilling, that all oil from Deepwater Horizon is cleaned up, and that the Legislature adopts a more aggressive renewable energy policy.  They are organizing letter writing parties to mobilize concerned citizens to get their voices heard in the House and Senate.

Here is some of Patrick’s art.  I had a great time talking to him on Friday; I found him to be pretty knowledgeable about how oil can impact the coast.

And then, a little something I thought would be interesting.  When I saw Allison’s painting of two horseshoe crabs mating, I thought of how much I had been seeing that over the last couple of months in St. Joseph Bay.  It has died down a bit, but I still see the occasional couple.  So here is a look at art and the life it imitates: 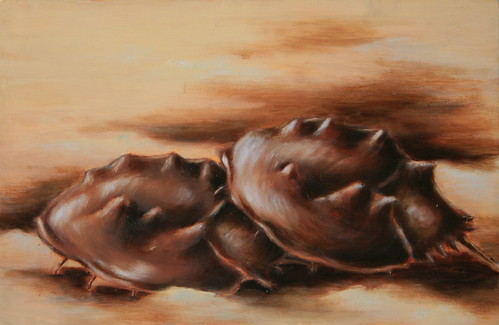 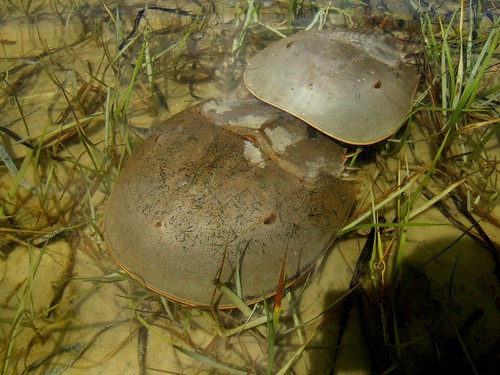 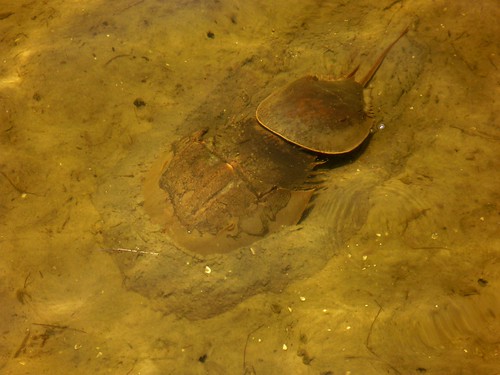 We want to hear from you!  Please leave your questions and comments below: